With Nearly All Data In, Afghan Voter Turnout At Record Low

Afghans voted Saturday in the first round of a presidential race that will decide whether President Ashraf Ghani will win a second five-year term. 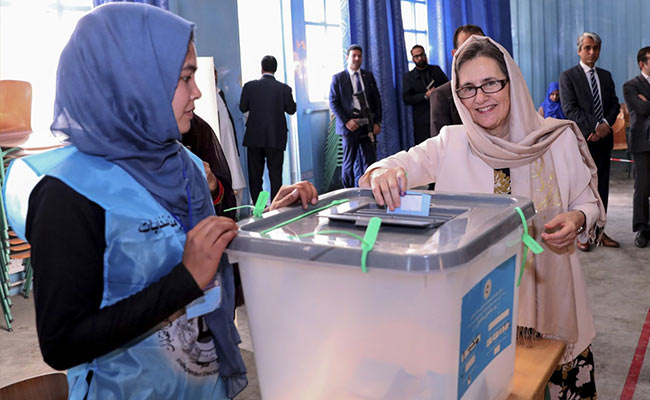 Voter participation in last weekend's Afghan presidential election will be much less than a third, the country's Independent Election Commission said Tuesday, marking a record-low turnout.

Afghans voted Saturday in the first round of a presidential race that will decide whether President Ashraf Ghani will win a second five-year term, fending off a challenge from his top rival, Afghanistan's Chief Executive Abdullah Abdullah.

With data collated from nearly all polling centres, around 2.59 million of Afghanistan's 9.6 million voters turned out to cast a ballot, according to IEC commissioner Maulana Abdullah.

"This is not a final figure, it is going to change as we are still receiving more data," Abdullah said.

The turnout -- about 27 percent -- represents a slight increase on initial figures, but still a historical low.

It was unclear how many of the approximately 4,500 polling stations that received voters still had to transmit data, but the number appeared small.

The turnout is the lowest yet in Afghanistan's presidential elections, as voters stayed away due to the threat of attacks, a muted election campaign and concerns over fraud.

Election officials have said the result would be the cleanest yet, with equipment such as biometric fingerprint readers and better training for poll workers ensuring the vote was fair.

On Monday, Abdullah claimed to have won the election, but observers dismissed his boast as premature.