At Kabul Clinic, Taliban And Soldiers They Fought Confront Wounds Of War

The Red Cross centre helps people with natural disabilities as well as war wounded, and has continued operating since the Taliban victory, treating all comers equally. 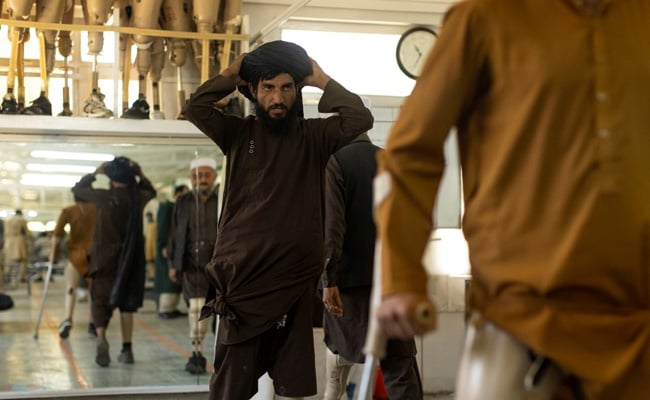 In August, Taliban terrorists advanced on Kabul and seized the Afghan capital.

Former Taliban terrorist Mohammad Ishaq, who spent years battling Western troops and local forces in Afghanistan, lost his leg in combat and is now learning to walk with a new limb. Standing near him at a Kabul clinic is one of the soldiers he defeated.

In the Red Cross Hospital in Kabul, Ishaq spoke simply of the eight years he spent in Helmand, the southern province where some of the fiercest fighting of the war took place and where thousands of civilians and combatants were killed and maimed.

"For years we fought against the infidels and we defeated them and I was injured," he said, wearing the traditional black turban worn by many Taliban during their 20-year insurgency.

That rebellion turned to conquest in August when the hardline Islamist terrorists advanced on Kabul and seized the capital. At the same time, the last foreign troops were withdrawing and what little resistance there was from local Afghan forces quickly wilted.

Ishaq waited as an instructor fitted a new artificial limb to replace the left leg he lost to a bullet wound, before striding across the long exercise hall watched by medical staff and patients from both sides of the conflict.

With Afghanistan in deep economic crisis and its health service in disarray, the Red Cross, with decades of experience treating the war's victims, is one of the few centres that can supply prosthetic limbs.

"They help all people in need; whatever the people need they provide," Ishaq said.

The staff are used to treating Taliban terrorists, said Alberto Cairo, an Italian physiotherapist with three decades of experience in Afghanistan who leads the orthopaedic programme for the International Committee of the Red Cross (ICRC).

"There were Taliban coming here, but very few and secretly. Now they come very openly, so we have many, every day 10-15, they come for different reasons," he said. "We help them like we help everybody."

'Fight Is Over For Me'

The centre, one of seven the Red Cross operates in Afghanistan, helps people with natural disabilities as well as the war wounded, and has continued operating since the Taliban victory, treating all comers equally.

"There have been no changes compared to how we worked before, everything is normal. Just as patients came before they come now," said Malalai, a female physiotherapist who has worked at the centre for the past 10 years.

Unlike many Afghan women forced from their jobs since the Taliban returned to power, she has been allowed to carry on.

While Ishaq tried out his new leg, members of the old Afghan National Army sat in the same hall looking on alongside wounded Taliban terrorists, all victims of a conflict that has killed and wounded tens of thousands of Afghans over four decades.

But there has been no victory to ease the suffering of defeated soldiers from the ousted administration, some of whose leaders fled when the Taliban approached Kabul and left the city to its fate.

Mohammad Tawfiq, a former soldier from Panjshir province in the north of the country was paralyzed from the waist down after a Taliban ambush in which he was the only survivor of his three-man patrol.

He has spent the last three years in bed and still needs support to stand up.

As he took in the morning sun, he was philosophical about being treated alongside his former enemies and wanted to be left alone to put the war behind him.

Yet after so many years of bloodshed it was hard to banish doubts about the future.

"The fight is over for me, my fight is over," he said. "I want to live in a peaceful environment. I can talk to anyone now. But I don't think they can rule for a long time."