Afghan Activists Hold Protest After Woman is Stoned to Death 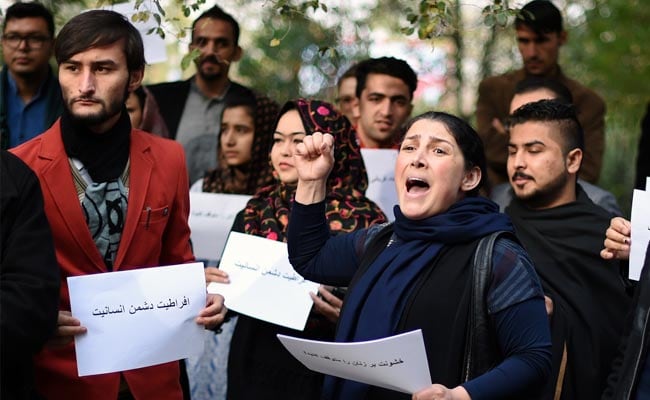 Dozens of Afghan activists staged a protest in Kabul today to call for justice for a young woman stoned to death by militants. (AFP Photo)

Kabul: Dozens of Afghan activists staged a protest in Kabul today to call for justice for a young woman stoned to death by militants after being accused of adultery in central Ghor province.

The woman, identified by local officials as Rokhsana and believed to be aged between 19 and 21, had been forced to marry and was caught trying eloping with another man.

She was placed in a hole in the ground as turbaned men gathered around and hurled stones at her with chilling nonchalance, footage released this week by broadcaster Radio Free Europe / Radio Liberty showed.

On Wednesday, the Afghan president Ashraf Ghani ordered a probe into the stoning in a Taliban-controlled area just outside Firozkoh, the capital of Ghor.

The incident, which local authorities believe took place more than a week ago, made international headlines with the footage going viral on social media, sparking strong criticism from within Afghanistan.

"We have come here to awaken the conscience of the Afghan people," Farahnaz Froutan, a female journalist, said at the protest in Kabul today.

"Today this happened to Rokhsana, tomorrow it will happen to you. The question here is, why we are not standing against such crime and not raising our voice," she added.

Another protester, Asaar Hakimi, said negligence by the Afghan government in the death of another woman earlier this year had led to the stoning of Rokhsana.

In March a woman named Farkhunda was savagely beaten and set ablaze in central Kabul after being falsely accused of burning a Koran in an incident that triggered protests around the country and drew global attention to the treatment of Afghan women.

"If the government had seriously punished the murderers of Farkhunda, this incident would have not happened," Hakimi told AFP.

Demonstrators, including men and women, chanted slogans such as "Death to the Taliban! Death to criminals! Death to enemies of Afghanistan!" at the protest.

The brutal punishment meted out to Rokhsana highlighted the endemic violence against women in Afghan society, despite reforms since the hardline Taliban regime fell in 2001.

In September, just months after the death of Farkhunda, a video from Ghor appeared to show a woman -- covered head to toe in a veil and huddled on the ground -- receiving lashes from a turbaned elder in front of a crowd of male spectators.

The flogging came after a local court found her guilty of having sex outside marriage with a man, who was similarly punished.