A total of 354 villages have either been completely or partially destroyed, Human Rights Watch said on December 18. Top officials in the United Nations and United States have described the Myanmar military's crackdown as ethnic cleansing. 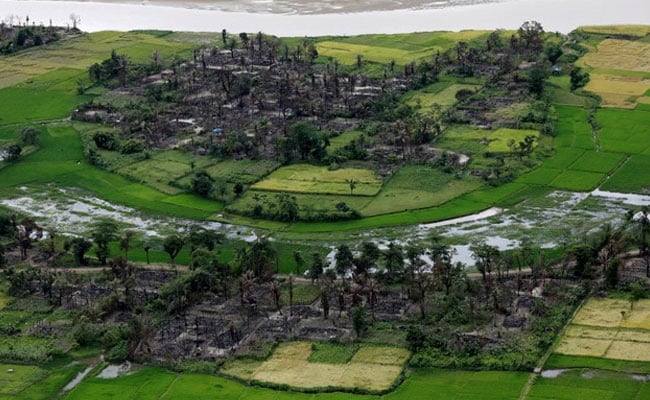 Aerial view of a burned Rohingya village near Maungdaw, north of Rakhine State in Myanmar

In the four months since the Myanmar military began a crackdown after Rohingya militants attacked an army base and police posts on Aug. 25, around 655,000 members of the stateless Muslim minority have fled the western state of Rakhine and crossed into neighbouring Bangladesh.

A Reuters graphic makes use of data from the U.N. Operational Satellite Applications Programme (UNOSAT) to show hundreds of villages in Rakhine state that were once inhabited by the Rohingya, but have now been burned down.

A total of 354 villages have either been completely or partially destroyed, Human Rights Watch said on Dec. 18.

The data, which was gathered from Aug. 25, the day of the Rohingya militant attack, to Nov. 25, shows burned settlements in an area stretching 110 km (68 miles) from the green hills of Rakhine's northern tip to beaches near the state's capital Sittwe in the south.

Top officials in the United Nations and United States have described the Myanmar military's crackdown as ethnic cleansing.

Myanmar has denied human rights abuses, saying its military is engaged in legitimate counter-insurgency operations. The military exonerated itself of all accusations of atrocities in an internal investigation, which published its findings on Nov. 13. Myanmar's civilian government has said that the burnings were carried out by Rohingya militants and the Rohingya themselves.

Myanmar's military did not respond to Reuters' questions about its role in the alleged atrocities against the Rohingya described in this graphic.