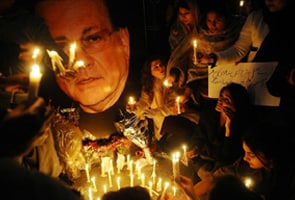 Washington: The assassination last week of one of the most moderate politicians in the Pakistani political elite was shocking enough, even in a country known for settling religious and political disputes with a hail of gunfire.

But it was Pakistan's reaction to the killing of the governor of Punjab, Salman Taseer -- starting with the rose petals showered on the smiling accused assassin as he was led into court -- that really rocked the Obama administration, as it tries to sustain its public line that the Pakistani government is a close ally, fully committed to countering terrorism.

"Everything about what's happened in the past few days is a reminder of how we're still losing ground in Pakistan," said one administration official who deals with the country often, but would not speak on the record because public criticism of Pakistan's two governments -- its weak civilian leadership and its always-dominant military -- is avoided at all cost. "It's trouble on many different levels."

Three levels, at least, and at each a threat to assumptions that underlie the Obama administration's strategy. One is that Pakistan is moving toward the West, even if sporadically. Another is that the United States can gradually deal more with Pakistan's elected government, and less with its military. The third, and most critical, is that Pakistan's expanding nuclear arsenal is truly safe from betrayal by insiders.

On the first level, the assassination left little doubt that a civil war is underway in Pakistan, one not confined to the border regions where the Taliban and Al Qaeda operate. Perhaps more than at any time since Pakistan reluctantly signed up to take on the Taliban and Al Qaeda, the battle is joined between those Pakistanis who believe their nation should be essentially a secular Islamic state, and religious extremists with visions of taking over the country.

"What was once a problem confined to the borderlands is now an infection inside the entire body-politic of Pakistan," Bruce Riedel, who ran President Obama's first review of Pakistan and Afghanistan policy in early 2009, said after the assassination. "It is another reminder that Pakistan has had an Islamic jihadist dictator before, and he can be re-incarnated." Mr. Riedel was referring to Gen. Mohammad Zia ul-Haq, who ran the country in the 1980s and whose government imprisoned Mr. Taseer at the time for opposing religious parties.

Second, Mr. Obama has often talked about engaging with Pakistan's democratically-elected government, starting with President Asif Ali Zardari, a friend and ally of Mr. Taseer. But the killing has further weakened the Zardari administration -- so badly that almost none of the country's top leaders were willing to attend his funeral or condemn his killing.

Instead, the leaders signaled that they would drop their advocacy of changing the blasphemy laws that Mr. Taseer had opposed. Those laws, a leftover of the Zia era, mandate a death sentence for anyone convicted of insulting Islam.

The third level is less discussed, at least publicly. But it may be the most frightening. It is the question of what this killing may indicate about the security of Pakistan's nuclear weapons, whose number and location are among the country's greatest secrets. For years, Pakistani officials have described an intense vetting system to make sure that "fundos," as the Pakistanis call the fundamentalists, are not involved in protecting the country's nuclear assets. A similar system, they said, was supposed to assure that armed bodyguards are loyal to the government, and to the officials they are supposed to protect.

By all accounts, Mr. Taseer was shot, at a public market, more than twenty times -- and none of the other guards in the area shot at his alleged 26-year-old attacker, Malik Mumtaz Qadri, a member of an elite police force.

No one is saying how Mr. Qadri, who smiled at the cheers he received from exultant supporters, got through the vetting process. But one American official said, "it's one more reason to give pause" when thinking about what could happen if a like-minded guard or scientist decided to make his point by seizing nuclear materials.

It is a subject American officials never talk about in public. But they do in private, as the WikiLeaks cables that emerged from the American embassy in Pakistan made clear. "Our major concern," Anne W. Patterson, then the American ambassador, wrote to Washington on Feb. 4, 2009, "is not having an Islamic militant steal an entire weapon but rather the chance someone working in GOP [Government of Pakistan] facilities could gradually smuggle enough material out to eventually make a weapon."

In an angry reaction to the disclosure of Ms. Patterson's secret cable, Pakistani officials said this was another American-generated conspiracy theory, probably intended to justify secret American military plans to seize the country's atomic arsenal in case of a political meltdown. They explained, again, that anyone who gets inside the high walls of the country's nuclear facilities first has to pass a "personal reliability program" run by the Strategic Plans Division, which is in charge of nuclear security. The program is designed to screen out Taliban sympathizers, religious extremists and Al Qaeda spies.

So far, despite one or two scares, it has worked -- at least since 2003, when Pakistan broke up the black market in nuclear weapons technology run by A. Q. Khan, a founder of its nuclear program. But Mr. Riedel, a former C.I.A. officer and author of the soon-to-be-published "Deadly Embrace: Pakistan, America and the Future of the Global Jihad" (Brookings Institution Press, 2011), said: "This assassination raises further questions about the vetting process in the Pakistani security system. And it's worth remembering that on their list of potential threats to their nuclear assets, the United States is No. 1, and terrorists and religious fundamentalists are further down the line."

For Pakistan itself, the assassination suggests that its internal upheavals are bound up with its myriad economic problems. And these threaten to exacerbate the country's many divisions.

For years the country has been under pressure from America, other lenders and creditors, and the International Monetary Fund to enact a series of economic reforms. Pakistan's wealthy elite rarely pay taxes, and the huge divide between them and the country's desperately poor breeds resentments. Those feelings, in turn, create conditions that insurgents can easily exploit.

Last year, during a visit to Pakistan, Secretary of State Hillary Rodham Clinton minced few words in declaring that serious economic reform had to get underway, and Prime Minister Yusuf Raza Gilani pushed through increases in fuel prices that edged toward those reforms. But after another major political party quit the governing coalition, threatening to undo the government, Mr. Gilani announced on Thursday that the fuel price increase -- aimed at the country's wealthy -- would be rolled back. Other economic reforms seem dead in the water.

"The country's economic team knows what's needed, but there is no political will," said Shuja Nawaz, the director of the South Asia Center of the Atlantic Council. The I.M.F. has already warned Pakistan that billions in aid are dependent on the country carrying through on promised reforms. But politicians facing ouster from power or condemnation by the global financial markets almost always choose the second.
Comments
Salman TaseerSalman Taseer shootingMumtaz Qadri