A Masked Shooter. A Campus Killing. And A Manhunt 159 Years Before Columbine.

Now almost totally forgotten, the episode bears some resemblance to the modern scourge of school shootings. 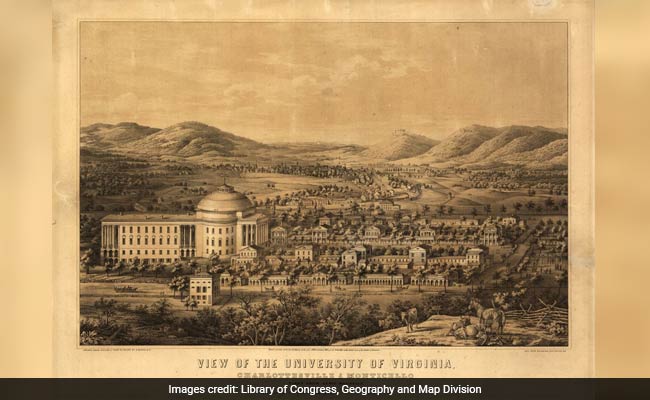 An illustration of the University of Virginia campus from the 1860s.

On the morning of Nov. 15, 1840, the Richmond Enquirer reported the nation's first campus shooting on the bottom corner of Page 2.

In a single paragraph labeled "Painful Occurrence," the paper said John A.G. Davis, a beloved University of Virginia law professor, "was shot by an unknown hand, with a pistol, in front of his dwelling" and "the ball was received just below the navel."

Davis died. A manhunt was on for his killer.

Now almost totally forgotten, the episode bears some resemblance to the modern scourge of school shootings - from the 13 people who died at Columbine High School 19 years ago on April 20, 1999, to the recent slayings at Marjory Stoneman Douglas High School in Florida.

The senselessness of motive. The randomness of victims. The gun culture gone awry.

Back in the country's early days, students were prone to riot over the smallest matters - for instance, cabbage.

In telling the story of the professor's death, Virginia Magazine noted this:

"In the early 19th century, rioting was a common practice in the United States among students who either didn't like the food, the rules or the punishments meted out to them. William and Mary students rioted in 1802 after professors punished two fellow classmates for dueling. Bad food - old fish and overripe cabbage - ignited Harvard's Rotten Cabbage Rebellion in 1807."

In Charlottesville that November, students at the university founded by Thomas Jefferson were not, as far as we know, concerned with cabbage.

Matthew Pearl, a novelist who wrote a short story based on the shooting, described the clash in an essay for The HuffPost in 2011:

"For several years at the University of Virginia, students had an annual tradition of raising hell around campus, burning tar barrels and shooting pistols into the air. The rioters wanted the freedom to carry arms on campus and each year marked the anniversary when restrictions were put into place that resulted in some defiant students being expelled."

On the evening of Nov. 12, gunfire erupted near the campus homes of the school's professors and staff. One of the students with a gun was Joseph Semmes, who like the others was wearing a mask.

Davis heard the shots and "stepped out," Virginia Magazine said, "to put a halt to the hullabaloo" and things went south from there:

"Around 9:00 p.m., he saw one of the masked students hiding behind one of the pillars. Davis jumped for him and reached to unmask the student. The student fled, but turned after a few steps, pointed his pistol, and, without uttering a word, fired at Davis' gut. The bullet pierced Davis' abdomen, and he fell to the ground with a groan. Students soon flocked to the pavilion as word spread that a professor had been shot. Several picked up Davis' limp, bleeding body and brought the wounded man inside."

While students were, like today, not all that enthused with authority, they were horrified by the death of a popular professor. Siding with administrators and police who asked for help, students hunted down Semmes, finding him a day or so later in a pine grove. Semmes seemed to care little about the professor's death, laughing and joking while in custody. When a judge asked him to take an oath on a bible to tell the truth, Semmes protested he was atheist.
The next thing that happened would seem shocking today: Semmes was released on bail.

Not shocking: He disappeared.

Rumors spread about his whereabouts for several years. Some students said they heard he moved to Texas. Others said he committed suicide. One rumor was correct, but it was only confirmed fairly recently.

In 2013, Jean L. Cooper, a U-Va. librarian who maintains a blog about 19th-century U-Va. students, tracked down a Baltimore newspaper from July of 1847 that reprinted an item from The Charlottesville Republican about his death.

"He shot himself with a pistol, the ball entering the left eye and penetrating the brain," the Charlottesville paper said, describing his body slumped in a chair at his brother's house in Georgia. "On the table was found an open note, stating, in the form of a certificate, dated July 9th, 1847, that his death was occasioned by himself."

(This story has not been edited by NDTV staff and is auto-generated from a syndicated feed.)
Comments
US school shootingColumbine