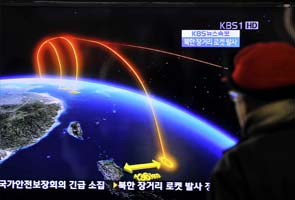 Seoul: North Korea's missile program is a point of national pride, with state TV regularly broadcasting past liftoffs set to rousing military anthems. But Pyongyang provides precious few details about its program's inner workings, leaving outside analysts to squeeze details from satellite photos and comparisons with other countries' missiles.

Here's a look at the painstaking picture outsiders have drawn of the North's secretive missile program:

TAEPODONG: This group of rockets represents North Korea's highest level of missile technology, according to experts in the U.S., South Korea and elsewhere. Taepodong missiles essentially use the same technology as Unha and Paektusan rockets, according to those experts. The North says they are space launch vehicles (SLVs) designed to send satellites into orbit. Taepodong is the name given by foreign experts after a village near North Korea's east coast launch site, according to the James Martin Center for Nonproliferation Studies.

TAEPODONG-1: Estimated range of 2,500 kilometers (1,550 miles), twice as far as the earlier Rodong missile, according to South Korea's Defense Ministry. North Korea calls its model the Paektusan-1, a carrier rocket named after the highest mountain on the Korean Peninsula, Mount Paektu.

North Korea launched the Paektusan in 1998 and claimed to have successfully placed a satellite into orbit, but South Korean and U.S. officials say the launch ended in failure. Still, the launch shocked the world because it went well beyond North Korea's known capability at the time.

Both lower stages are liquid-fueled, with a potential solid-fuel third stage, according to the Federation of American Scientists (FAS), which estimates the payload at about 500 kilograms (1,100 pounds). Accuracy is reportedly poor, with no meaningful strike capability.

TAEPODONG-2: A three-stage rocket with a potential range of more than 6,700 kilometers (4,100 miles), putting Alaska within striking distance, according to South Korea's Defense Ministry. The first two stages are liquid-fueled while the third is believed to be solid-fueled, according to FAS.

ADVANCED TAEPODONG-2: Experts in the U.S. and South Korea have dubbed the missile version of the Unha rocket that North Korea launched on Wednesday an "advanced" Taepodong-2. South Korean defense officials call it a long-range missile with a potential range of about 10,000 kilometers (6,200 miles), putting the U.S. West Coast, Hawaii, Australia and eastern Europe within striking distance. However, experts question whether North Korea has mastered the technology needed to shrink and mount a nuclear warhead on the missile.

KN-08: North Korea unveiled this long-range missile at a military parade in April 2012. However, Markus Schiller and Robert Schmucker of Germany's Schmucker Technologie dismissed it as a poorly made mockup. They took issue with casings that appeared too thin to withstand flight, and discrepancies among the missiles of the same make on display. South Korea media reports said in April that the missile's range was up to 6,000 kilometers (3,730 miles).

The missile was transported on a large mobile launch vehicle in a parade that capped weeks of celebrations marking the 100th anniversary of the birth of the country's founder, Kim Il Sung. KN-08 is a NATO code name; its North Korean name is unknown.

MUSUDAN: North Korea has deployed this intermediate range ballistic missile since 2007, according to South Korea's Defense Ministry. Unveiled in 2010, it has a range of 3,000 kilometers (1,800 miles). Parts of the Philippines are within the far end of its striking range. North Korea is believed to have used Russian SS-N-6 submarine-launched ballistic missile technology for the mobile, land-based missile, according to the James Martin Center for Nonproliferation Studies. It reportedly is liquid-fueled with one or two stages. Accuracy is unknown. The United States calls the missile the Musudan, naming it after a village near its test site, according to Jane's Information Group. Its North Korean name remains unknown.

RODONG: U.S. bases in Japan are the likely target of this medium-range missile, according to Seoul's Institute of Foreign Affairs and National Security. Reportedly known in North Korea by the name Hwasong, Rodong is closely related to Iran's Shahab-3 and Pakistan's Ghauri II (Hatf V), according to the James Martin Center for Nonproliferation Studies. The similarity is considered strong evidence of the countries' collaboration, and of North Korean sale of technology and missile equipment to others.

All three countries continue to refine the design. This missile is believed to be capable of carrying a nuclear warhead, according to the Center for Arms Control and Non-proliferation. It has an estimated range of 1,300 kilometers (800 miles) and payload of 700 kilometers (1,500 pounds), according to South Korea's Defense Ministry.

They are single-stage, liquid-fuel missiles on mobile launchers, according to FAS and GlobalSecurity.org. Most reportedly have fairly poor accuracy, though some may have been fitted with warhead separation and more modern guidance systems. Foreign experts named the missile Rodong after the North Korean village where it first was spotted.

Promoted
Listen to the latest songs, only on JioSaavn.com
SCUD: Single stage, liquid-fueled missile with a range of up to 800 kilometers (500 miles). Some versions of this missile are also called Hwasong in North Korea. The SCUD B and SCUD C have estimated ranges of 300 and 500 kilometers (180 and 310 miles), respectively, putting South Korea within their range, according to Seoul's Defense Ministry. The SCUD D has an extended range of 700 kilometers (430 miles) with a decreased payload compared to SCUD C, and could target Japan, according to Missilethreat.com. Accuracy is reportedly considered extremely poor.

Ballistic missile programs in Pakistan and Iran were built on SCUD technology, Postol said in 2009.

A Teen Tech Genius Figured Out How to Hijack Teslas