Much of what researchers know about megalodon sharks were based on the fossilized remains of its teeth. 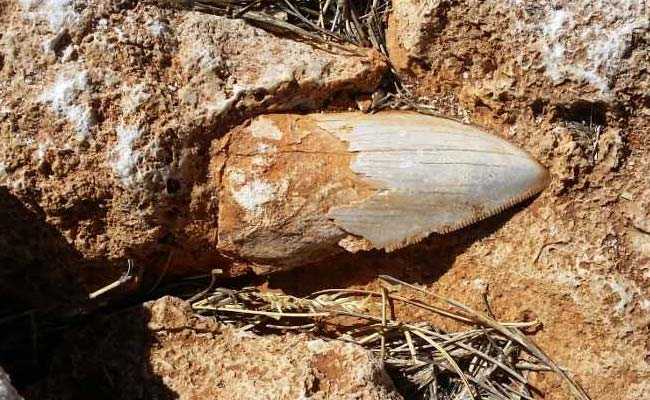 A piece of pointed, fossilized tooth, which once belonged to a massive shark known to have dwarfed even the great white, sat undisturbed in a remote, secret location in western Australia.

That had been the case, until last week. Wildlife officials said the megalodon tooth, believed to be about 1.6 million years old, had been removed and stolen from its resting place in the vast Cape Range National Park on Australia's Ningaloo coast. Few people knew of the exact location of the ancient fossil, said Arvid Hogstrom of western Australia's park and wildlife agency, and it remains unclear who the thief is.

A member of the public told wildlife rangers on Friday that the tooth was missing.

Hogstrom said the fossil was stolen just as his team was figuring out ways to secure it.

"We've been looking at everything from bulletproof glass covers and other sorts of cages to enclose it," he told ABC. "But obviously someone's got in there before we've been able to [secure it]."

This ancient shark species, which has a name that literally means "giant tooth," grew to about 50 feet long. That's three times the size of an adult female great white shark, which can be about 16 feet long. A megalodon weighed more than 20 tons, roughly three times the weight of a Tyrannosaurus rex.

"A great white is about the size of the clasper, or penis, of a male megalodon," Peter Klimley, a shark expert and professor at the University of California at Davis, told National Geographic in 2008.

Much of what researchers know about megalodon sharks were based on the fossilized remains of its teeth. Researchers say it preyed on giant prehistoric turtles and whales, which a megalodon could chew with a force between 24,000 to 40,000 pounds. That's strong enough to crush a car.

"Megalodon's killing strategy was to bite the tails and flippers off large whales, effectively taking out their propulsion systems," said Stephen Wroe of the University of South Wales in Australia, the National Geographic reported in 2008.

Scientists say this shark species went extinct about 2 million years ago, during the middle of the Miocene era, though they have only speculated as to why. One theory is that megalodon sharks were unable to adapt as the temperature of the Earth's oceans dropped.

"His father, myself, and his younger brother were downstream from him at the time and heard him yelling what he'd found and saw him holding it up. We were speechless," the boy's mother, Tina Frazier, told the Myrtle Beach Sun News.

In 2013, megalodon sharks became the subject of a Discovery Channel documentary that was created based on the notion that the ancient shark might still be alive today. The film featured actors pretending to be scientists on the hunt for a nearly 70-foot-long megalodon off the coast of South Africa, according to National Geographic.

The documentary, titled "Megalodon: The Monster Shark Lives," angered many, including scientists.

Promoted
Listen to the latest songs, only on JioSaavn.com
"If this megalodon special had aired on the Syfy Channel, I probably would have loved it," David Shiffman, then a doctoral student studying shark ecology, told National Geographic. "But Discovery bills itself as the premier science education television station in the world, and they're perpetuating this utter nonsense."

(This story has not been edited by NDTV staff and is auto-generated from a syndicated feed.)
Comments
MegalodonGiant Shark tooth