When the creators of a "A Dog's Way Home" launched a search for a lead, they had one demand: It had to be a shelter dog. 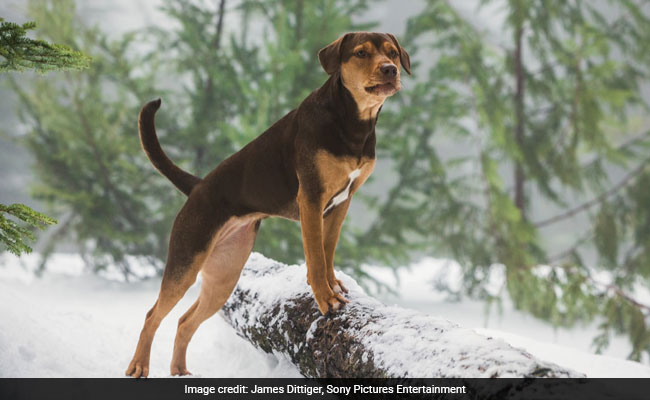 Shelby has come a long way from the dump, and now lives in Huntington Beach, California

We've all heard the cliched stories of an actor's struggles before a career breakthrough: living hand to mouth, waiting tables, temping, couch surfing and generally scraping by before landing that major role.

The star of "A Dog's Way Home," now in theaters, has a hard-luck tale that could top them all. Before her big break, she was living in a landfill, rooting through garbage for her next meal.

Meet Shelby, the tan-and-black mutt who portrays Bella, occupying the screen, often solo, for much of the film's 97 minutes - and whose trash-to-riches saga could itself be a gripping cinematic yarn.

Shelby's big break came in April 2017, when animal-control officer Megan Buhler was driving in Cheatham County, Tennessee, a rural area about 25 miles from Nashville. Out on an unrelated call, Buhler spotted and approached what she recalled was a noticeably skittish dog emerging from the dump.

"So I knelt down and just said, 'Oh, come here, baby,' " said Buhler, 29. "There were lots of cars driving by - I mean, it was heavy traffic. She was so scared, and she finally came right up to me, and I was able to put her in my truck."

The pair headed to the county animal shelter, where the staff took to calling the new resident Baby Girl.

Buhler and TJ Jordi, then the shelter's animal-control director, had no inkling that 2,000 miles away, Hollywood was looking for a dog to play Bella in a film written by Cathryn Michon and W. Bruce Cameron and based on Cameron's book.

A central story line involves breed-specific legislation or local laws that prohibit certain dog breeds from living within municipalities or counties. In this case, the focus was Denver's ban on "pit bull breeds."

Cameron is a prolific author who specializes in dog books, perhaps most notably "A Dog's Purpose," which was on the New York Times bestseller list for nearly five months and was made into a 2017 movie starring Dennis Quaid. (A sequel to that film, "A Dog's Journey," opens May 17.)

Cameron and Michon, who are married, are unabashed dog lovers and say part of their passion is expressed by advocating for homeless dogs whenever possible.

"We started off in the very beginning saying that the dog that is the star of the movie will have to be a rescue, because we were trying to prove something," Cameron said. "We think we're making a difference in the animals' lives when they are adopted, and we're trying to reveal to the world that rescue dogs are wonderful animals."

The filmmakers hired trainer Debbie Pearl, whose company Paws for Effect functions as an animal talent agency of sorts, one known for finding adoptable dogs and training them for on-screen roles.

Pearl then assigned the find-a-Bella job to Teresa Ann Miller, a freelance trainer whose credits include "White God," an acclaimed 2014 Hungarian film that features more than 200 dogs. Miller's mission was to search shelters nationwide for a dog that could play Bella - and then give her the acting chops to do it.

"We initially started looking for a kind of Rottweiler/shepherd/pit bull mix," Miller said. "That's kind of what (Cameron's) book cover looked like to me."

Meanwhile, back in Tennessee, Baby Girl was already getting diva treatment. The shelter's staff believes that shooting stellar photographs of its animals immensely boosts their adoption prospects. Jordi, the former animal-control director, recalled being so encouraged by the results of the earliest photos that he "eventually built things up to the point we actually had a full studio setup."

"Honestly, it was a really good picture, and she was flat-out smiling," Miller said. "I mean, it was beautiful."

Still, Miller was wary. Two promising canine candidates already hadn't panned out, and a third possible Bella had been adopted out of a Los Angeles shelter the night before Miller was scheduled to meet and videotape the dog.

But the Miller-Baby Girl summit proceeded without a hitch, spanning two hours, with the trainer assessing her new friend on personality, temperament and the ability to respond to simple commands. Miller was sold.

Within two weeks, Cameron and Michon traveled to Tennessee, met Baby Girl and developed the same crush. In an email, Michon said that she was struck by "the extraordinary sweetness of her soul." Baby Girl, she added, "was loving, smart, oh-so-eager to please, and we knew instantly we had found our Bella."

In short order, Miller adopted Baby Girl from the shelter on behalf of Pearl and Paws for Effect, renamed her Shelby ("a really cute Southern name") and took her to California for training.

Miller said her approach reflects the style of her late father, a well-known Hollywood animal trainer, eschewing quick commands in favor of talking in sentences to elicit more relaxed behavior.

"Instead of saying, 'Come, sit, stay,' - you know, all these sharp commands where the dog's looking at the trainer - we might say: 'Can you come over here? Hey, what are you doing?' " Miller explained. "She'll stop and she'll look around a little bit more, and I'll say, 'Why don't you go ... go lie down, put your feet up.' And she'll start to do it, and I'll say, 'That's good.' ... So it's kind of a different type of training technique."

Miller and Shelby trained for just over three months before filming began. Then they were together each day on the set. Most of the film's reviews, thumbs up or down, have lauded Shelby's performance. Variety wrote that the film "is at its best when relying on Shelby and her trainers: It's amazing how much of the humor, drama and emotion is carried on her canine shoulders."

Has its heroine gone Hollywood? Sunglasses at night? Not Shelby. After additional training, she's now working as a therapy dog on location at places that include veterans' facilities, hospitals and schools attended by students with special needs.

Shelby now lives with Pearl in Huntington Beach, California. And at age 2½, Shelby has turned out to be as gifted a therapy dog as a thespian, Pearl said.

"She just has this insight of what she needs to do when she needs to do it," Pearl said. "And not all dogs have that, even dogs that I've used for therapy dogs for a long time."

Shelby has come a long way from the dump. But Buhler, the animal-control officer, said she saw Shelby recently and needed only a split-second to compare the movie star with the dog she coaxed away from piles of trash.

(This story has not been edited by NDTV staff and is auto-generated from a syndicated feed.)
Comments
A Dog's Way HomeShelby the dogbella dog movie