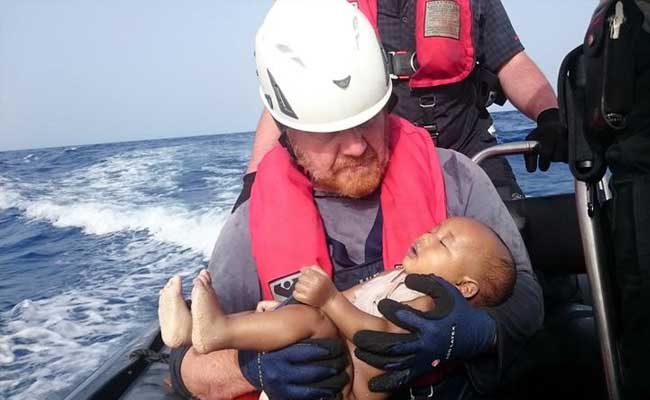 A German rescuer from the humanitarian organisation Sea-Watch holds a drowned migrant baby, off the Libyan cost May 27, 2016.

LONDON: At first, the baby looked as "if it were alive."

But when a German rescuer who gave his name as Martin looked closer, he noticed the "shining, friendly but motionless eyes," and the body that looked like a doll with its "arms and tiny fingers stretched toward the sky." The baby was one of at least 25 drowning victims discovered by Martin and his colleagues in the sea between Libya and Italy on Friday, he said in an email on Tuesday.

"Nobody in our boat talked. Only six hours ago this baby had still been alive," he recalled.

But the rescuers had come too late. According to the German aid group Sea-Watch, the baby was on a boat with dozens of other Europe-bound migrants that wound up sinking. At least 45 of them died and 135 were rescued, it said. Both Sea-Watch and the Italian navy participated in the rescue operation, and bodies of the victims were turned over to the navy. According to German rescuer Martin, most of the other drowned refugees were women; two of them appeared to have been pregnant.

The rescuer, a father who usually works as a music therapist in Germany and was volunteering with Sea-Watch, said of his reaction to recovering the baby's corpse: "I wanted to scream, but I decided to sing instead, in order to calm myself and the baby which should never have died - and to give some kind of expression to this incomprehensible, heartbreaking moment."

Since May 21, more than 1,000 migrants have died in the Mediterranean Sea as their boats sank, according to data released by the International Organization for Migration (IOM) on Tuesday.

Until last week, fewer than 1,500 refugees were believed to have drowned this year, the organization said. On Tuesday, the IOM said the number of casualties had risen to 2,443 by Monday - over 30 percent more than in the first five months of 2015. Last week, there were still 24 percent fewer confirmed fatalities than last year's total through all of May.

Amid the surge in victims, Sea-Watch decided to release the photo on Monday. It was first published by Reuters.

"If you don't want to see these pictures - stop producing them," Sea-Watch said in a statement sent to The Washington Post.

"The death of refugees is being tolerated to scare off others who might come after them," Sea-Watch founder Harald Hoppner was quoted as saying.

Criticism of the European Union's mission to prevent migrant deaths in the Mediterranean has increased in recent weeks. A report by the British House of Lords, the upper house of Parliament, found that the mission was "an impossible challenge," partially because the search and rescue was "not its core mandate."

Instead, the E.U. has recently put a stronger emphasis on trying to disrupt the human trafficking networks in countries like Libya that facilitate the dangerous sea crossings. However, nongovernmental groups and human rights organizations fear that an even stronger focus on that part of the mission could "lead to much higher death rates at sea," one expert quoted in the British report argued.

Last September, the world reacted with outrage at photos of a drowned refugee boy, 3-year-old Alan Kurdi, whose family had fled from a Kurdish-dominated region in northern Syria. He was found dead on a beach in Turkey.

Those photos went viral and had enormous impact. After they appeared, for example, the Canadian government removed some of the legal obstacles that asylum seekers coming to the country had faced. Elsewhere, the photo was credited for shifting public opinion in favor of refugees.

But the photo of Alan Kurdi came at a time when thousands of refugees from Syria and other war-torn countries were being welcomed as they arrived in Europe after dangerous boat trips from Turkey. Over time, however, the huge crush of newcomers resulted in increasing calls on authorities to place limits on the number of arriving migrants and refugees.

Meanwhile, in the Mediterranean Sea, private organizations such as Sea-Watch try to make up for the alleged shortcomings of the European Union's current mission.

After German rescuer Martin had handed over the baby's body to the Italian navy, he and his colleagues returned to the boat wreckage.

"It was extremely touching to see a young couple: The two - both of them were probably in their mid-20s - had embraced each other so strongly that they were hard to separate," when the rescuers pulled the bodies out of the water, Martin recalled.

"I hope this photo helps to put a spotlight on the countless other people who have drowned silently and who wanted nothing apart from a better future," the German rescuer said.

(This story has not been edited by NDTV staff and is auto-generated from a syndicated feed.)
Comments
drowned babyEurope-bound migrantsMediterranean Refugee CrisisInternational Organization for Migrationdrowned baby photo