San Fele survives economically by pitching itself as a weekend tourism destination. Before the pandemic, on many summer Sundays, dozens of tour buses from other parts of Italy would pull up, in what amounted to a momentary doubling of the town's population. 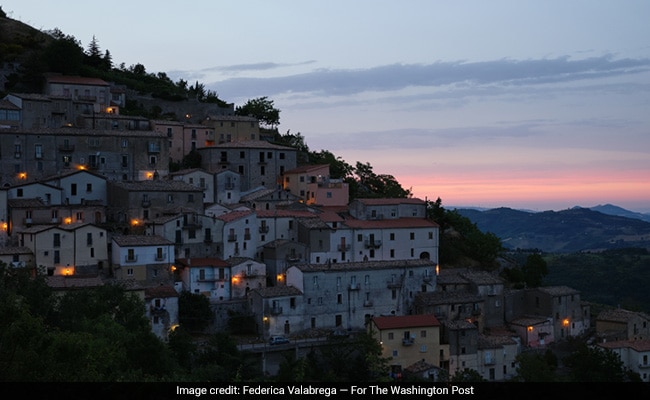 The mountaintop town is four hours south of Rome, reachable by switchback roads - appropriately remote for an alternate reality. Here, far away from the coronavirus pandemic, in a place where nobody has tested positive or gotten sick, it was lunchtime, and a restaurant in town was filling up: tables of four, tables of six, a table of eight, and then the biggest table of all, reserved for teachers and middle schoolers celebrating graduation.

The teenagers had taken their final exams online - per national rules - but this was San Fele, so they were able to push through the restaurant doors, laughing, eating in a hurry, trading seats, no masks in sight. The teachers weren't wearing masks either. Nor the mayor, sitting at another table. Nor the live musicians, who started belting out tunes in the kind of celebration that could only happen in a place where nobody was deemed a threat.

"It's almost normal," said Elisabetta Chieca, 37, a city councilor, sitting at a nearby table where the mayor was fighting to speak over the din. 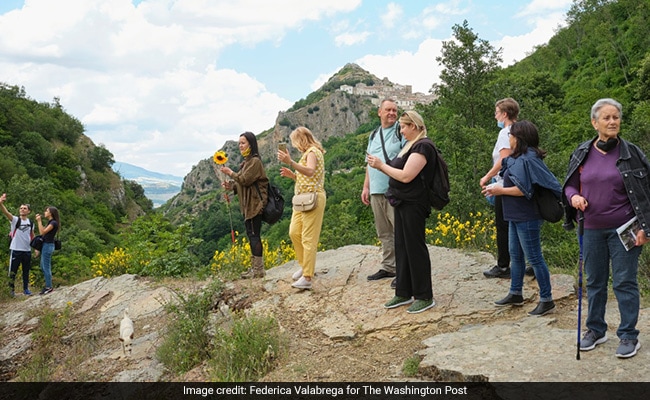 The first tour bus arrived in San Fele this past week.

"All locals here," said Donato Sperduto, the mayor. "Everybody knows everybody."

With some combination of geographic isolation, initial precautions and good fortune, the town of San Fele never even had a coronavirus curve to flatten - and it now has the enviable chance to ride out the pandemic as a New Zealand-like oasis, free from the virus's dangers and disruptions.

But like other places around the world that have managed to control or prevent outbreaks, from island nations to nursing homes, there is recognition here that coronavirus-free status is a precarious state. At any moment, somebody with the virus could come up the switchback roads.

"Our fear," Sperduto said, "is those who come from the outside." 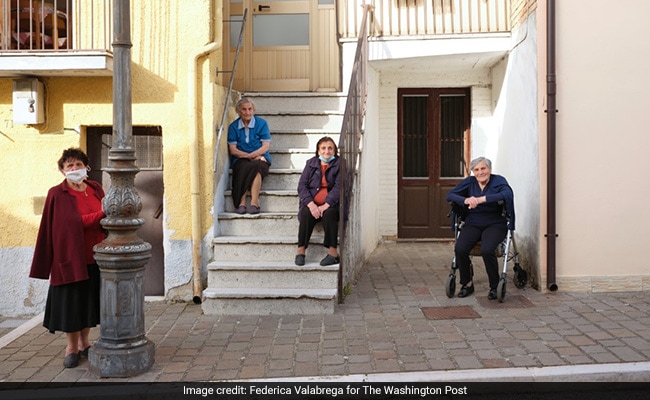 San Fele survives economically by pitching itself as a weekend tourism destination. Before the pandemic, on many summer Sundays, dozens of tour buses from other parts of Italy would pull up, in what amounted to a momentary doubling of the town's population. Visitors would stroll through the city center. They'd buy ricotta at a local farm. After hikes to see the nearby forest and waterfalls, they'd stop at the very restaurant where the mayor was now talking about how to navigate Italy's reopening.

"We can't rest easy," he said, as the server brought out pasta topped with truffles, then roast lamb.

So after lunch, the mayor took the three newest arrivals in town - two reporters and a photographer - back into the city center, where the stone streets were too narrow for cars. He led the way around the corner and walked up the steps to the office of one of San Fele's two doctors. 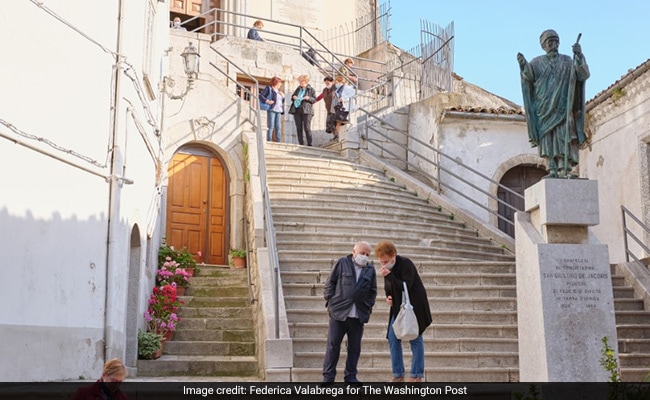 The door opened, and a nurse spread out three coronavirus antibody tests, a batch of which the mayor had ordered for the town at the beginning of Italy's outbreak.

"As soon as somebody arrives, we'll try to test them," Sperduto said. "Of course, it's all based on being aware of who visits."

A nurse, with a prick, drew blood samples from three fingertips. A couple of minutes later, the results were back.

The town was still coronavirus-free. 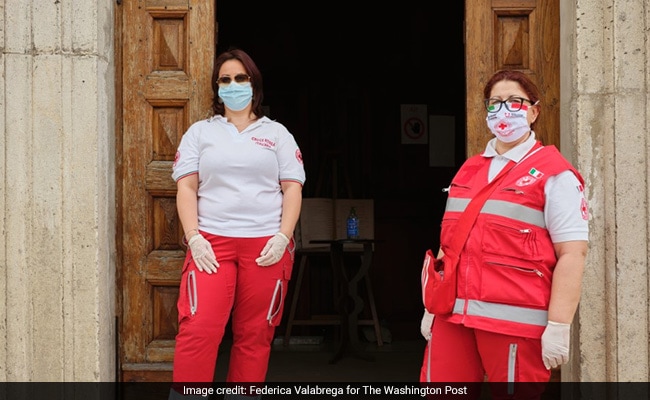 From the highest point in San Fele, one can see the signs of decay common in so many Italian hilltop towns - places built for medieval defense, but less practical for the modern world.

The town, over the past century and a half, saw its population get halved and then halved again, to 2,800. Most of the youth left for college or jobs, returning only as visitors to see their elderly parents.

The town center has become a hollowed husk, 30% occupied, beautiful but crumbling. Weeds twist through some of the sidewalks and walls. A couple of front doors are padlocked. Some of the windows are knocked out. One resident, leading a short tour down the street where she lived, pointed to the houses all around her.

Because those who remain in San Fele are largely older - it has an estimated 15 centenarians, and many more in their 90s - officials had worried at the outset of the pandemic that the town might be in for a disaster. While outbreaks raged in Italy's north, experts warned about what could lie ahead for Italy's poorer south, given its dearth of hospital intensive care beds and medical resources.

So San Fele took precautions in every way it could. It barred people from entering the pharmacy and instituted home deliveries for prescriptions. It administered coronavirus tests to volunteers, police officers, trash collectors - anybody having contact with others. Meanwhile, a nationwide lockdown halted most movement, and saved the south from a calamity of the scale experienced in the north.

San Fele's region - Basilicata, the obscure instep of Italy's boot - has had only 401 coronavirus cases, and only two in the last month.

At least one was a person who entered the region from the outside.

In retrospect, the mayor said, San Fele felt most secure during the lockdown. People were anxious, but almost nobody was arriving in town.

Italy loosened restrictions on inter-regional travel June 3. Now it is opening up to travelers from across Europe. Many of the people who grew up in San Fele and moved away now have the chance, at last, to come back.

And gradually, that is what is happening.

The mayor's eldest daughter, 26, who lives in the northern city of Turin, recently made plans for a return visit. A man from Milan showed up in town on a recent weekend, wearing an N95 mask, to check in on his mother.

"Most of my family - grandfather, brothers, cousins - all left," said Vito Ricigliano, 72, who then mentioned that a cousin who lives in Rome was also returning to San Fele later that day.

"We grew up together," he said. "We trust one another. But anything is possible. When I go visit him, I'll wear a mask."

Several hours later, Ricigliano was knocking on the door of his cousin, who was still unpacking and cleaning up. The cousin, Michele Maselli, 72, moved away from San Fele at age 14 and said the place was "dying," but he came back every summer - for the "tranquility," and because it was home.

Maselli mentioned that, when he arrived in town, somebody stopped him and asked why he was wearing a mask.

He was taken aback.

"Out of respect," he replied. He didn't consider himself high-risk - there weren't many new daily cases in Rome and he and his wife had driven directly to town. Still, it seemed the right thing to do.

"Here," Ricigliano said with a laugh, "you are the threat."

The new arrivals had no duty to inform the town they were coming, and so they hadn't yet been tested. Meanwhile, the town had no chance to test people who were just passing through.

The following day, around 10 a.m., the first tour bus of the season pulled up to a parking lot at the base of the town. It brought a group of 23 people from across Italy's south. They had started the morning in Matera, one hour away. They got off the bus here wearing backpacks and sneakers, holding walking sticks. Most had masks.

For the next three hours, they trekked through the town center and into the surrounding forest, on trails crowded with day-trippers. They took photos at the waterfalls. At lunchtime, they made their way to the restaurant.

It was even more packed than it had been a few days earlier. Big families, with children and grandparents, were there for their Sunday meals. One teenager, with balloons at his table, was celebrating a birthday.

A server pushed several tables together. The group of 23 out-of-towners sat down.