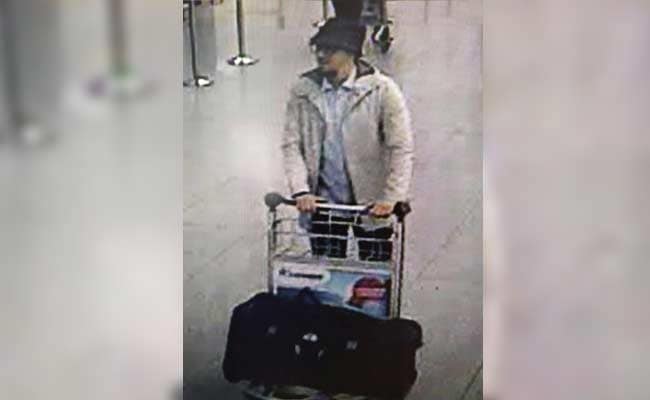 The grainy picture shows one of the suspects pushing trollies with suitcases past the check-in area at Brussels airport. (Reuters photo)

Brussels: The Belgian federal prosecutor's office confirmed the three men in a picture published in the Belgian news media are suspects in the airport bombings.

We have come to expect this demeanor from the Islamic State fighters dispatched from Syria to carry out mass murder in Europe. "Calm" and "determined" were among the most frequently used descriptions by witnesses who saw the attackers during the November attacks in Paris. "Ready to die," was another.

Belgian officials have identified the three men in the photo as central suspects in the bombings at the airport: Two of them, in black and wearing single black gloves on their left hands, were thought to have been killed. The third, wearing white, is still being sought in the attack, which along with another bombing at a train station was quickly claimed by the Islamic State militant group.

The image offers some potential clues to the techniques and mindset of the suspects, though the photo alone cannot provide answers.

First, the gloves on two of the suspects prompted some observers to speculate that they were hiding detonation devices. In the Paris attacks on Nov. 13, hostages held by the Islamic State attackers inside the Bataclan concert hall reported seeing the gunmen pacing the hall with detonators in their hands. And next to the bodies of those who set off their explosive vests, officials found electrical wire, 9-volt batteries and melted plastic believed to have been part of the detonation mechanisms.

The bombs in the November attacks were made of triacetone triperoxide, or TATP, an explosive used in seven places across Paris, and traces of which were found in what were suspected to be Islamic State safe houses in Belgium. The explosives used in Tuesday's attack have not yet been identified, but given that TATP has become the Islamic State's signature explosive for attacks in Europe, experts are expecting the bombs to also have been made from a TATP recipe.

Among the ways a TATP bomb can be ignited is through an electrical charge, using a simple battery and wiring that can be held in the palm of one's hand, explained Jimmie C. Oxley, a professor of chemistry at the University of Rhode Island, considered a leading expert on TATP. Shown the image of the three suspects, Oxley noted, however, that it would be odd for the bombers to wear a single glove, because it might draw attention.

Second, based on the extensive damage inside the airport, including video showing tiles or paneling in the ceiling that had been blown out, Oxley surmised that the bombers most likely had more than just suicide belts. A belt like those used in Paris can carry around one pound of TATP.

She estimated that the damage in the Brussels airport, based on the available images, was probably caused by a bomb containing between 30 and 100 pounds of TATP. The video of the three suspects shows them pushing suitcases, which could have carried the bomb, but then the detonation mechanism most likely would not have been carried by hand, she explained.

One of the telltale signs to look for is a crater. If the bomb or bombs were in the baggage, and the suitcase was about 6 inches off the ground on the cart, that would likely have burrowed into the floor of the terminal, she explained. In the available pictures so far, it is unclear whether craters were left behind.

In an interview with Agence France-Presse, the mayor of Zaventem, the Brussels suburb where the airport is, said that there were bombs in three of the bags pictured on the men's luggage carts. He said that two had exploded, the third not.
In her own laboratory in Rhode Island, Oxley routinely blows up mailboxes as demonstrations for her graduate students - it takes only 15 to 20 grams of TATP to do it, a volume roughly the size of a wristwatch face.

Their beards seem to be trimmed close to their faces, in contradiction of the strict Islamic codes practiced by the Islamic State in the territories they control in Syria, Iraq and Libya, where men are not allowed to trim their facial hair. But as it has stepped up its efforts to stage international terrorist attacks, the Islamic State has instructed its operatives to shave their beards while in Western countries so they blend in better, according to court documents and statements on the group's media outlets.

Some public officials have pointed to mosque attendance or conservative Islamic styling like hijabs for women or long beards for men as signs of radicalization. But more often, the opposite is the case: None of the known attackers in Paris, or in the previously foiled plots in Belgium, were regular attendees at mosques.

And in Paris, closed-circuit TV video of the bombers showed men much like the ones walking into the check-in terminal at the Brussels terminal. Beyond being calm, they also had closely trimmed beards, and their appearance was designed to mimic that of a typical young European men.

The gunmen inside the Bataclan were described as wearing sports clothes. And at the Stade de France, the leg of one of the bombers was still inside a tracksuit bearing the logo of a German soccer club.
© 2016, The New York Times News Service