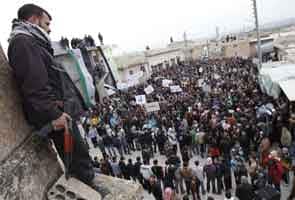 Damascus: The Syrian regime's rocket and shell bombardment of protest hubs has left another 79 civilians dead, activists said, as Washington closed its Damascus embassy and Britain recalled its ambassador.

The opposition Syrian National Council (SNC) said the regime was surrounding Homs with tanks on Monday ahead of "a major offensive" and warned of a "genocide" in the central Syrian city.

The Syrian Observatory for Human Rights said at least 42 civilians were killed in Homs alone in another day of blood-letting, and warned the death toll was likely to rise with many of the dozens of wounded in critical condition.

State media reported the deaths of three soldiers and said a "terrorist group" blew up an oil pipeline in Homs.

The army also launched an assault on the Zabadani area near Damascus with heavy tank shelling, killing at least ten people, according to the Britain-based Observatory.

It also reported civilian deaths in Rastan, Hula and Qusair, all towns in Homs province, as well at Sarghaya, near Damascus, in the northern city of Aleppo and in Idlib, northwest Syria.

"What is happening is horrible, it's beyond belief," said activist Omar Shaker, reached by telephone as loud detonations were heard in the background.

"There is nowhere to take shelter, nowhere to hide," he said. "We are running short of medical supplies and we are only able to provide basic treatment to the injured."

One video posted on YouTube apparently showed a field hospital hit by shelling in the Baba Amro district and wounded patients lying on stretchers on the floor amid pools of blood and shattered glass.

Footage shot by a BBC undercover team in Homs showed buildings ablaze in rebel neighbourhoods as they were pounded with heavy weapons.

The violence comes as Western powers seek new ways to punish Damascus amid growing outrage over Saturday's veto by Russia and China of a UN Security Council resolution condemning Syria for its near 11-month crackdown on dissent.

US Secretary of State Hillary Clinton called the veto a "travesty."

The State Department said it had closed the American embassy in Syria and withdrawn remaining staff after Damascus refused to address security concerns.

The Polish government is to provide emergency consular services to any American citizens remaining in Syria.

US President Barack Obama shied away from talk of military intervention and vowed to pursue diplomatic means.

"It is important to resolve this without recourse to outside military intervention and I think that's possible," he said in an NBC television interview.

"We will use our remaining channels to the Syrian regime to make clear our abhorrence at the violence that is utterly unacceptable to the civilised world," Hague said.

Neither France nor Germany, he said, would accept the "blocking" of action on Syria.

Russia and China both defended their vetoes, with Moscow condemning as "hysterical" the West's angry reaction.

Russian Foreign Minister Sergei Lavrov and Foreign Intelligence Service chief Mikhail Fradkov are due in Damascus on Tuesday, as news reports said the mission could try to persuade Assad to quit.

China called on both sides of the conflict to halt the violence that has claimed the lives of at least 6,000 people since March, according to opposition activists.

The Syrian National Council said the "genocide" in Homs showed the regime was "increasing the pace of its crimes and repression."

Saudi Arabia called for "critical measures" on Syria and warned of an impending "humanitarian disaster" after the failure of the UN resolution.

The six-nation Gulf Cooperation Council, of which Riyadh is the leading member, is to meet on Saturday on Syria, on the eve of an Arab League ministerial meeting at the organisation's Cairo headquarters.

Referring to Arab League chief Nabil al-Arabi, Ashton at a meeting in Brasilia said she and Patriota discussed "how much we support him on the Arab League's initiative and the importance of seeing that leadership (being) able to support the people of Syria into a future free of bloodshed."

Meanwhile the British-born wife of Syria's president has spoken in support of her husband for the first time since the uprising began, a British newspaper reported on Tuesday.

Promoted
Listen to the latest songs, only on JioSaavn.com
"The president is the president of Syria, not a faction of Syrians, and the first lady supports him in that role," The Times quoted Asma al-Assad as saying in an email sent via an intermediary from her office.