7-Year-Old Migrant Girl Who Died In US Custody Was Healthy, Says Father

The family's attorneys disputed reports that the girl, Jakelin Caal, went several days without food and water before crossing the border, which contradicts statements by the Department of Homeland Security. 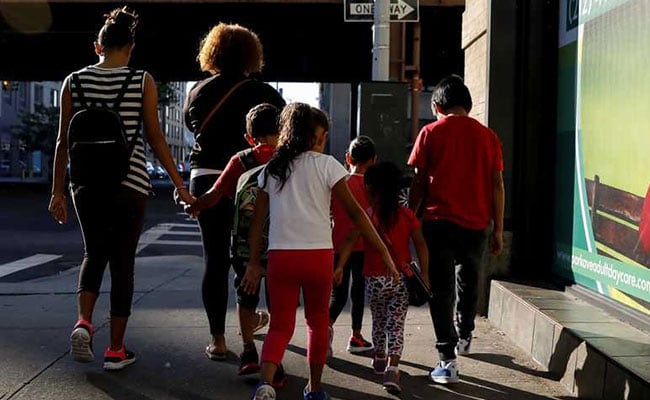 The 7-year-old Guatemalan girl who died in US Border Patrol custody was healthy before she arrived, and her family is now calling for an "objective and thorough" investigation into her death, a representative for the family said Saturday.

In a statement, the family's attorneys disputed reports that the girl, Jakelin Caal, went several days without food and water before crossing the border, which contradicts statements by the Department of Homeland Security. Ruben Garcia, founder and executive director of Annunciation House - an El Paso-based nonprofit that aids migrants - said that the girl's father, 29-year-old Nery Caal, said she was healthy and had no preexisting conditions.

"He's been very clear, very consistent that his daughter was healthy, and his daughter very much wanted to come with him," Garcia said during the news conference.

Garcia said he could not comment on specifics related to the girl's death, and discouraged the media from speculating about the cause, which is now the subject of an internal investigation at the Department of Homeland Security. Congressional Democrats have also called for meetings with US Customs and Border Patrol officials and a full accounting of the incident.

Annunciation House said in a Facebook post that the girl's father was in their care and being hosted in one of their houses. Nery Caal, who was granted provisional release from CBP custody according to consular officials, was not present at the briefing and has not spoken publicly about his daughter's death Dec. 8 from dehydration, shock and liver failure.

"The death of any person while that person is in the custody of Border Patrol needs to be thoroughly and transparently investigated," the post read. "This is doubly so when the person is a 7-year-old."

Jakelin's death was announced Thursday by US Customs and Border Patrol after inquiries by The Washington Post, raising questions about the conditions of their facilities. CBP Commissioner Kevin McAleenan told the Senate Judiciary Committee on Tuesday that its stations were not properly suited to handle the record number of asylum seekers crossing the border, which include families and children.

CBP and Department of Homeland Security officials deny that the agency is responsible for what happened to the girl. The Trump Administration has also denied responsibility for her death.

More than a day before she died, Jakelin, her father and 161 other Central American migrants crossed the US border outside of Antelope Wells, NM, seeking to turn themselves in to Border Patrol agents.

A sobering account of Jakelin's death posted on Facebook by the Department of Homeland Security called the incident "incredibly tragic." The agency said the girl did not show any signs of health issues during a routine check that took place when she and her father were taken into custody.

"The initial screening revealed no evidence of health issues. During the screening, the father denied that either he or his daughter were ill. This denial was recorded on Form I-779 signed by the father," the DHS account said, adding that they were offered food and water, and had access to restrooms. The form was supplied in English, but CBP officials said agents provided a verbal translation.

The family's attorneys said in the statement that it was "unacceptable" to have Caal sign a document in a language that he didn't understand. They also said that false speculation about her death could "undermine" the investigation.

In a letter to Rep. Kevin Yoder, R-Kan., late Friday, McAleenan said the child's father said she "drank water and ate the food offered" while in custody and "was not demonstrating any signs of distress" before her father later notified agents that Jakelin was ill. Yoder is the chairman of the appropriations subcommittee for Homeland Security.

The two were picked up by a bus nearly eight hours after they crossed the border. It was here, DHS said, that Jakelin's father complained that the 7-year-old was sick and vomiting. Her condition apparently worsened over the course of the 90-minute bus ride toward Lordsburg, N.M., which CBP officials said Friday was the fastest way for her to get medical attention.

Her father said his child was no longer breathing as the bus arrived to the station on the morning of Dec. 7. The girl's fever had reached 105.9 degrees and agents providing medical care revived her twice, DHS said.

She died 15 hours later at the Providence Children's Hospital, according to DHS and consular officials. Her father was present during her death.

"We urge investigating authorities to conduct a transparent and neutral investigation into Jakelin's death while in custody," her attorneys said in the statement.

In a letter to DHS Inspector General John Kelly on Friday, senior Democratic lawmakers, including members who will soon chair the House Judiciary and Homeland Security committees, demanded an immediate investigation into the girl's death.

In a Friday morning tweet, Hillary Clinton suggested that the incident was symbolic of the "humanitarian crisis" taking place at the border.