The bombing in the eastern province of Nangarhar was the latest in a wave of deadly insurgent attacks which has claimed the lives of hundreds of civilians and security forces across Afghanistan. 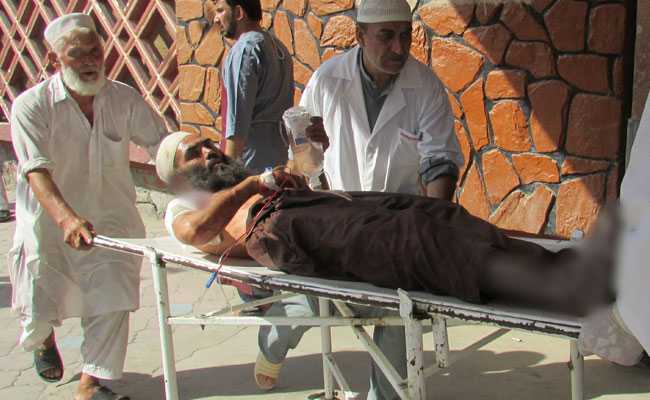 The dead and wounded were rushed to several hospitals in the back of pickup trucks and ambulances.

The death toll from a suicide attack on Afghan protesters has soared to 68, officials said Wednesday, as violence flares across the country ahead of elections and a key Islamic holy day.

The bombing on Tuesday in the eastern province of Nangarhar was the latest in a wave of deadly insurgent attacks which has claimed the lives of hundreds of civilians and security forces across Afghanistan.

There has been no claim of responsibility for the massacre, but ISIS, which has carried out most of the recent suicide bombings in Afghanistan, is active in the province.

Scores of demonstrators had blocked the highway between the provincial capital of Jalalabad and a major Pakistan border crossing in protest over the appointment of a local police chief when the suicide bomber blew himself up.

The dead and wounded were rushed to several hospitals in the back of pickup trucks and ambulances, overwhelming doctors and nurses as they struggled to cope with the huge number of casualties.

Zar Khan, one of the injured, told AFP he saw a young man get out of a car and run towards the protesters shouting "Allahu akbar" (God is greatest).

"Then the explosion happened and I found myself surrounded by blood and flesh," Khan said from his hospital bed.

It was the deadliest attack since an ambulance packed with explosives detonated in a crowded street in the heart of Kabul in January, killing more than 100 people, mostly civilians. That bombing was claimed by the Taliban.

Violence across the country has intensified in recent weeks as the Taliban make gains on the battlefield and ISIS launches deadly urban attacks.

It comes as Afghanistan enters a typically violent period of the year -- the holy month of Muharram, which began on Tuesday.

Ashura, the most important Shiite observance, falls on the 10th day of Muharram and is often marred by deadly attacks.

The fighting has tempered optimism that had been tentatively growing as Afghan and international players ratchet up efforts to convince the Taliban to negotiate an end to the 17-year conflict.

An unprecedented ceasefire in June followed by talks between US officials and Taliban representatives in Qatar in July raised hopes that peace negotiations could bring an end to the fighting.

There has been speculation the two sides will meet again this month.

The intensified fighting has also fuelled speculation over whether Afghanistan's long-delayed parliamentary elections will go ahead on October 20.

The country's stretched security forces will be tasked with protecting thousands of polling stations around the country at a time when they are already struggling to beat back terrorists.

Delivering ballot papers and monitoring the vote, which is seen as a test run for next year's presidential election, will be challenging, officials have warned.

There are already concerns about widespread fraud.

In recent days, Taliban terrorists killed nearly 60 members of the security forces in a spate of attacks in the country's north, and threatened a provincial capital for the second time in as many months.