6 People Arrested In Brussels After Attacks 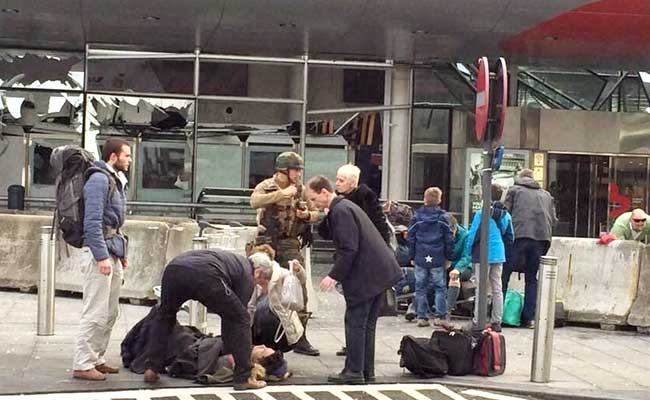 The Brusels attacks, killed at least 31 people and left about 250 others injured, were promptly claimed by the ISIS.

Brussels, Belgium: Six people were arrested on Thursday in a series of police raids in Brussels, federal prosecutors said, two days after terrorist attacks in the Belgian capital left 31 dead.

The arrests come as Belgian ministers under fire for intelligence failings over Tuesday's ISIS-claimed suicide blasts admitted "errors" and offered to quit.

Prime Minister Charles Michel refused to accept the resignations of the interior and justice ministers, who have been severely criticised for allowing the attackers -- at least three of whom were known to authorities -- to slip through the net.

Hundreds of people gathered late into the night at the Place de la Bourse in Brussels to mourn the victims of the suicide attacks on the city's airport and metro on Tuesday.

"Our love for Brussels is stronger than terror," read a banner held by a young couple.

Led by King Philippe, Belgians also observed a minute of silence on the third and final day of mourning for the 31 people killed and 300 injured in attacks.

Harrowing new footage of the moments after the Zaventem airport attack meanwhile emerged on Belgian television, showing a lone baby left crying in the wreckage next to the lifeless body of a woman.

With criticism growing that international authorities failed to follow links between Tuesday's bombings and the attacks on France in November, key Paris suspect Salah Abdeslam insisted he was unaware of plans to strike the Belgian capital.

Police arrested Abdeslam in Brussels on Friday, after he spent four months on the run as the last surviving member of the group that killed 130 people in Paris.

Abdeslam's lawyer Sven Mary said on Thursday his client now did not want to fight extradition to Paris and insisted he "didn't know" in advance about the Brussels attacks.

But Belgium is reeling from revelations that three of the Brussels attackers -- including Ibrahim El Bakraoui and his brother Khalid, who bombed Maalbeek metro station -- were known to police and had strong links to Abdeslam.

Interior minister Jan Jambon and Justice Minister Koen Geens both tendered their resignations over the claims that Ibrahim El Bakraoui had slipped through the net despite being arrested by Turkey near the Syrian border and deported to the Netherlands.

"There were errors at Justice and with the (Belgian) liaison officer in Turkey," Jambon was quoted as telling the Le Soir daily.

Prosecutors meanwhile confirmed that Khalid El Bakraoui was the subject of an international warrant for terrorism in relation to the Paris attacks and had rented out a flat used by the Paris cell in the Belgian city of Charleroi.

Belgian authorities are now seeking a new suspect with a large bag captured on CCTV talking to Khalid El Bakraoui at Maalbeek station, who then did not get on to the train with the bomber, police sources told AFP.

Attacks 'Not A Surprise'

A huge manhunt was still going on for a third attacker whose bomb failed to go off at Brussels airport, a man wearing a hat seen on security footage.

Raids have taken place in the Brussels district of Schaerbeek where the three airport attackers left from on Tuesday morning carrying three explosive-packed suitcases. There have been no arrests in the neighbourhood.

Over the border in France, police arrested man in the Paris area who was in "the advanced stages" of a plot to attack France, French Interior Minister Bernard Cazeneuve said.

Cazeneuve said the man, a French national, belonged to a terrorist network but added there was "no tangible evidence linking the plot to either the attacks in Paris or Brussels".

Belgium on Thursday lowered its terror alert to the second highest level for the first time since the attacks, but soldiers still guarded key sites, streets were eerily quiet and public transport shut down again in the early evening.

EU justice and interior ministers convened in Brussels for an emergency meeting to show "solidarity" to Belgium and work out a plan to address the threat to Europe posed by terrorists.

"The attacks did not come as a surprise," said European Home Affairs Commissioner Dimitris Avramopoulos, calling on EU nations to push through plans to share the names of all air passengers.

People of around 40 nationalities were killed or wounded in the attack, that struck the symbolic heart of Europe and has left security agencies across the continent on edge.

Very few of the dead have been formally identified but stories were emerging of lucky escapes and tragic ill fortune of people caught in the wrong place at the wrong time.

A young German couple headed for a New York holiday after their wedding last year were among the victims of the Brussels airport attack, which left the wife missing and the man in a coma, the Bild daily reported.

Adelma Marina Tapia Ruiz, a 37-year-old Peruvian woman, was killed by the airport bomb but her two young daughters and husband survived because the twin girls had run off and the father was chasing after them.

US Secretary of State John Kerry is due to arrive in Brussels on Friday in a show of solidarity, during which he will pay tribute to the victims at the airport.