A 36-year-old father's search for campfire wood unearths a note from a captain of the Soviet Navy. 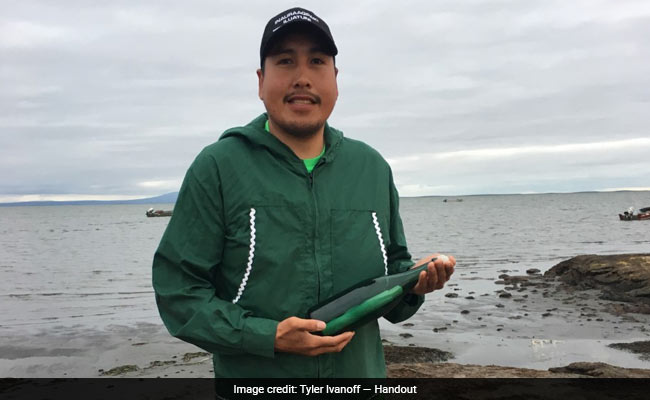 Tyler Ivanoff holds the bottle on a beach just outside of Shishmaref, Alaska.

On a breezy summer evening, Tyler Ivanoff took his family on a boat trip to a remote beach in western Alaska. While his children plucked salmonberries on a hillside, Ivanoff searched the coastline for driftwood to use in a campfire. That's when a green bottle in the sand caught his eye.

He darted back up the hill on Aug. 5, and showed his children the glinting bottle with a cork cap and piece of paper curled up inside.

"Dada, is that a treasure map from a pirate ship?" his 8-year-old daughter exclaimed, Ivanoff recalled in a Sunday interview with The Washington Post.

Ivanoff uncorked the vessel and pulled out a wrinkled sheet with a message crafted in blue ink. The penmanship was worn but legible, and, as Ivanoff recognized from language classes in college, written in Russian.

He fell asleep that night unsure of what he had discovered, but with the help of thousands of Facebook users and the Russian media, Ivanoff would soon unravel a mystery dating back 50 years that originated across the Bering Strait in the Soviet Union.

Ivanoff, 36, lives in Shishmaref, Alaska, an island village of around 600 people not far from Russian territory. He spends most of the year working as an educational aid at a local school and chips in at a construction company during the summer. He had been preparing a campfire to roast hot dogs when he spotted the green bottle lying a few feet from the water.

"It was out of the ordinary just lying there," he recalled. "I had to go see what it was."

After his kids oohed and aahed at his discovery, Ivanoff tucked away his find. But before he went to bed, he posted a photo of the note to Facebook, asking for help deciphering its message.

"I found a message in a bottle today," Ivanoff wrote. "Any friends that are Russian translators out there?"

He woke up hours later to 500 shares on the post and messages from friends of friends offering insight into what it said.

"Sincere greetings! From the Russian Far East Fleet mother ship VRXF Sulak," it read, according a translation on the BBC. "I greet you who finds the bottle and request that you respond to the address Vladivostok -43 BRXF Sulak to the whole crew. We wish you good health and long years of life and happy sailing. 20 June 1969."

The message, it seemed, was sent by someone affiliated with the Soviet navy more than 50 years ago.

Within the day, Russian reporters had gotten wind of the bottle and by the end of the week, they had tracked down its author: Capt. Anatoliy Botsanenko, now 86 and living in Crimea.

Reporters from Russia-1, the state broadcaster, visited Botsanenko at his home to show him the note. The captain studied a photo of the paper, growing teary-eyed as he recognized his handwriting from decades ago.

"It looks like my handwriting," he said, according to a translation provided by Russia-1 to KNOM. "Really . . . looks like. But I'm not sure. Wait . . . For sure! East industry fishing fleet! E-I-F-F!"

Botsanenko had tossed his message into the sea when he was 36 and serving aboard the Sulak, a ship he told reporters he helped construct and then sailed on until 1970.

While it's not unheard of for messages tossed into the sea to reconnect with their owners decades later, Botsanenko's tale does have particular interest for some historians. According to Mark Edele, a historian of the Soviet Union at the University of Melbourne, the note illuminates a key difference between the U.S.S.R. under Leonid Brezhnev, the premier at the time Botsanenko threw the bottle, and Joseph Stalin, who ruled almost two decades earlier.

"The bottle message clearly shows that Brezhnev's Soviet Union was a much more liberal place than Stalin's," he said in an email to The Post, adding that under Stalin, "nobody in his right mind would have sent a random message abroad and given his address on it."

The captain and Ivanoff have not yet spoken, but Ivanoff hopes to connect with Botsanenko one day.

"I would like to say hello and a heartfelt greeting to him also," Ivanoff said. "I also wish him good health, a long life and happy sailing."

(Except for the headline, this story has not been edited by NDTV staff and is published from a syndicated feed.)
Comments
Message In A BottleSoviet Navy