Officials said there were 71 people on board the US-Bangla Airlines turboprop plane from Dhaka when it crashed just east of the runway. 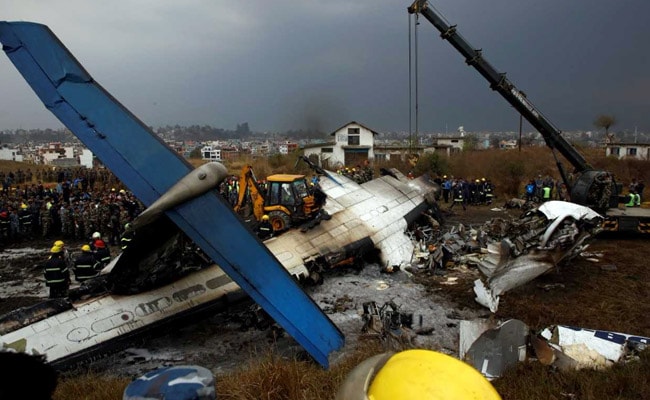 Kathmandu: Forty-nine people were killed when a Bangladeshi plane crashed and burst into flames near Kathmandu airport on Monday, in the worst aviation disaster to hit Nepal in nearly three decades.

Officials said there were 71 people on board the US-Bangla Airlines turboprop plane from Dhaka when it crashed just east of the runway and skidded into a nearby football field.

Rescuers cut apart the mangled and charred wreckage of the upturned aircraft to pull people out, while other passengers were found buried under debris that scattered as the plane hit the ground.

"Forty people died at the spot and nine died at two hospitals in Kathmandu," police spokesman Manoj Neupane told AFP, adding another 22 were being treated in hospital, some in a critical condition.

Survivor Sanam Shakya, who climbed out of a window of the smouldering plane, said he didn't realise the aircraft was in trouble until it hit the ground.

"The plane was going up down, right and left, up down... so I thought that was some air traffic only. But I came to know that the aircraft had a problem only when it forcibly landed," the 33-year-old said from a hospital bed.

The cause of the crash was not immediately clear, but a statement from airport authorities said the plane was "out of control" as it came in to land.

"Our pilot is an instructor of this Bombardier aircraft. His flight hours are over 5,000 hours. There was a fumble from the control tower," Asif told reporters outside the airline's offices in Dhaka.

An airport source, who spoke on condition of anonymity, said there may have been confusion between air traffic control and the pilot over which end of Kathmandu's sole runway -- referred to as 'Runway 02' and 'Runway 20' -- the plane was meant to land on.

A recording purportedly of the conversation between the controller and pilot has been published online. AFP could not independently verify the recording.

Eyewitnesses said the plane -- a Canadian-made Bombardier Dash 8 Q400 turboprop -- crashed as it made a second approach towards the airport, shuddering violently as it lost height before hitting the ground and bursting into flames.

"It should have come straight but it went in the other direction... then it crashed towards the field," said airport cleaner Sushil Chaudhary, who saw the crash.

Desperate relatives searched for the names of their loved-ones on a list of casualties hung outside a hospital where most of the victims were taken. One woman collapsed in tears after checking the list.

Another bewildered-looking survivor, 27-year-old Basanta Bohara, told AFP at a hospital that he couldn't remember how he escaped from the burning wreckage.

"I remember the accident. Nothing else. I don't know how I got out," Bohara said.

Airline spokesman Kamrul Islam said 33 of the passengers were Nepali, 32 were Bangladeshi, one each from China and the Maldives. Local media reported that many of the Nepali passengers were college students returning home for a holiday.

Kathmandu airport briefly closed after the accident, forcing inbound flights to divert, but it has since reopened.

It is Nepal's only international airport and experts say the mountainous landscape with the towering Himalayas to the north poses difficulties for pilots coming in to land.

"The landing at Kathmandu because of the terrain is a little challenging," said Gabriele Ascenzo, a Canadian pilot who runs aviation safety courses in Nepal.

Depending on the direction of approach, pilots have to fly over high terrain before making a steep descent towards the airport, Ascenzo added.

The accident is the deadliest since September 1992, when all 167 people aboard a Pakistan International Airlines plane were killed when it crashed as it approached Kathmandu airport.

The Dhaka-based US-Bangla Airlines launched just four years ago and made its first international flight in May 2016 to Kathmandu. It has since expanded with routes to South Asia, the Middle East and Southeast Asia.

Promoted
Listen to the latest songs, only on JioSaavn.com
In 2015 one of its planes overshot the runway on landing at Saidpur in northwest Bangladesh. There were no reports of injuries.

(This story has not been edited by NDTV staff and is auto-generated from a syndicated feed.)
Comments
nepal air crashUS-Bangla Airlines