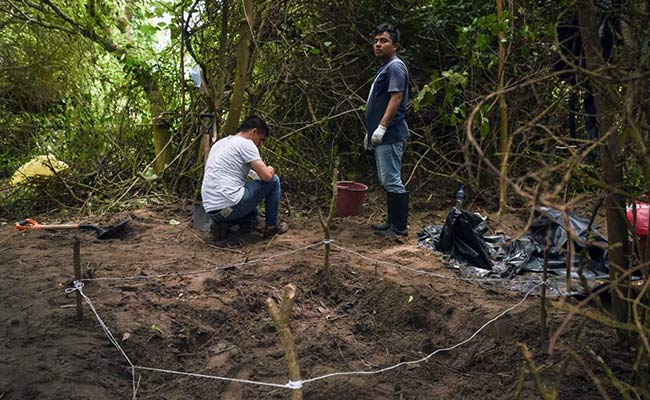 In September, more than 160 human skulls were found inside a mass grave in Veracruz, Mexico. (AFP)

Mexican authorities began looking for bodies Monday at a new mass grave in the violent state of Veracruz, where hundreds of corpses have been found at similar sites in recent years.

The Solectio collective, a group of mothers searching for their missing children, said it learned about the site from an anonymous tip.

"The information we have is that there could be 400 to 500 bodies," said Rosalia Castro Toss, the group's spokeswoman.

The site is located about five kilometers (three miles) from another mass grave, the Colinas de Santa Fe, where 296 bodies have been found so far.

Home to one of Mexico's largest ports, Veracruz is the scene of bloody turf wars between the rival drug cartels Jalisco New Generation and Los Zetas.

Corrupt officials are accused of colluding with the cartels during the administration of jailed ex-governor Javier Duarte.

A string of top security officials face charges of running police death squads that took out their enemies during Duarte's administration (2010-2016).

Since 2006, when the government deployed the army to fight drug trafficking, more than 200,000 people have been murdered. Another 30,000 are missing.

(Except for the headline, this story has not been edited by NDTV staff and is published from a syndicated feed.)
Comments
VeracruzVeracruz Mass GraveMexico Mass Grave