An elderly Scovill Zoo inhabitants, an alligator, was given a trip to a water park in US, marking the end of the summer season's visitor season. 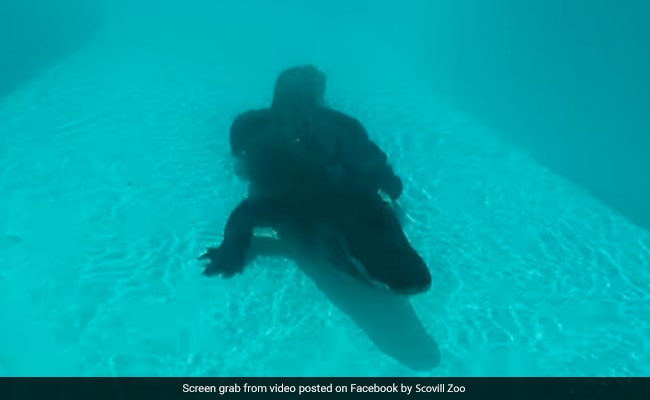 One of the elderly Scovill Zoo inhabitants, an alligator, was given a trip to a water park in Illinois, United States, marking the end of the summer season's visitor season. A post was shared by the official handle of Scovill Zoo on Facebook on Thursday along with a video of the alligator taking a fresh swim into the water body. The male alligator named 'G' is a long-term resident of Scovill Zoo. It was given a day-long field trip to Splash Cove to visit the lazy river, the post said.

'G' is a 39-year-old alligator having a weight of 300 pounds and length of 12 foot. Before the visit to the water park, G had never left his captivity very far, and it had never been plunged in water deeper than a few feet. Its dedicated keepers decided to take G swimming as a method of enhancing its life and providing other experiences.

"He loved freshening up on his swimming skills, floating in the river current, and let us know that he enjoyed his trip to the lazy river by refusing to leave," the post said.

"G finally decided to come out and then basked in the sun on the concrete deck for a few minutes before safely venturing back to his home at Scovill Zoo. We are pretty sure he had a big alligator smile and was loving life on his vacation day," the post further said.

G and its keepers of the zoo are hoping that there should be an annual trip for the alligator at the end of every summer when humans vacate the water park facility and before the staffs drain the pools for the winter.

The post has received over 61,000 views and more than a thousand likes since being shared. In the comment area, there have been a variety of responses.

"He needs a larger enclosure for every day living. I couldn't imagine being held in such a small space my entire life," wrote a user.

Another said, "My 3-year-old wants to know if he got to go down the water slides too."