Three people were killed and over 20 others injured in the blast outside Saeed's Jauhar town residence on June 23, 2021 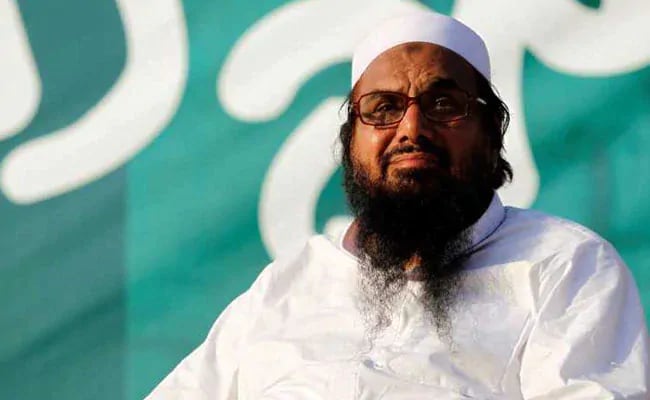 Hafiz Saeed is in jail in Lahore in terror-related cases. (File)

An anti-terrorism court in Pakistan has started the trial of three more suspects in a car bomb blast that killed three people outside the house of jailed terrorist leader Hafiz Saeed, considered the mastermind of the 2008 Mumbai attack.

Saeed, chief of the banned Jamaat-ud-Dawah (JuD) has been serving jail sentence at the Kot Lakhpat Jail in Lahore for terror financing cases. There were unconfirmed reports that he was present at his house when the blast took place in June last year.

"The prosecutors of the Counter Terrorism Department (CTD) of Punjab Police declared the suspects — Samiul Haq (mastermind) Aziz Akbar and Naveed Akhtar (facilitators) — guilty before the court," a CTD official told PTI on Thursday. He said the suspects, who were brought amid tight security, pleaded not guilty before the court. The official said the Anti-Terrorism Court (ATC) Lahore directed the prosecution to present witnesses before it on October 4.

The court had also handed down five years' imprisonment to a woman, identified as Ayesha Bibi, during the in-camera trial proceedings at the high-security Kot Lakhpat Jail here.

The prosecution had presented 56 witnesses against these five convicts.

Three people were killed and over 20 others injured in the blast outside Saeed's Jauhar town residence here on June 23, 2021, that also damaged a number of houses, shops and vehicles in the area.

According to the CTD, TTP's Eid Gul had installed explosives in the car used in the blast. The car belonged to Peter Paul David and other three — Sajjad Shah, Ziaullah and Ayesha — were facilitators.

Hafiz Saeed, the 71-year-old radical cleric and a UN-designated terrorist, whom the US has placed a USD 10 million bounty on, has been convicted for over 68 years' imprisonment in multiple terror financing cases moved by the ATC. His punishment is running concurrently.

Saeed-led JuD is the front organisation for the Lashkar-e-Taiba (LeT) which is responsible for carrying out the 2008 Mumbai attack that killed 166 people, including six Americans.

The US Department of the Treasury has designated Saeed as a Specially Designated Global Terrorist. He was listed under the UN Security Council Resolution 1267 in December 2008.

The global terror financing watchdog Financial Action Task Force (FATF) is instrumental in pushing Pakistan to take measures against terrorists roaming freely in the country and using its territory to carry out attacks in India.