Those three shots were what it took to kill an armed robber outside her daughter's school and turn Katia Sastre's life upside down. 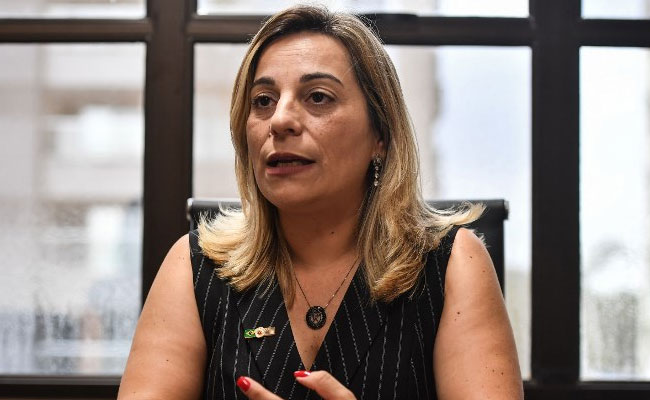 Katia Sastre was not shy in using the video of her dramatic shoot-out in the election run-up.

It took three gunshots to change Katia Sastre's life, turning the police officer first into a heroine and then one of the most successful politicians in Brazil's general election.

Those three shots were what it took to kill an armed robber outside her daughter's school and turn Sastre's life upside down.

She was praised by Sao Paulo's governor and having been fast-tracked into politics, Sastre received 264,000 votes as she was elected to Congress.

Known locally as "mother police officer," Sastre was not shy in using the video of her dramatic shoot-out to promote herself in the election run-up.

"I shot and I would do it again. I'm brave," she said in a campaign video, dressed in her police uniform.

In the video, an armed robber appears suddenly pointing a gun at a woman, but just as quickly, as others scream and run away, the off-duty Sastre pulls a weapon from her handbag and shoots him, twice in the chest and once in the leg.

The 21-year-old assailant died in a hospital.

"I'm not happy about the death, which no one wants. But I am happy for having saved good people," the 42-year-old Sastre told news agency AFP from her office in Suzano, a city in the Sao Paulo metropolitan area.

Family affair
Sastre wasn't just some ordinary passer-by, though. She joined the military police two decades ago, following in the footsteps of her father, grandfather and great-grandfather, while her husband also works for the same force.

Her moment of fame came on Mothers' Day in May, after which the video quickly went viral on social media.

"When I left the police station after making a statement, people started ringing me and congratulating me as they'd seen the video," she recounts with a smile.

Her actions proved popular not least because security and safety have been major campaign issues in Brazil, where 63,800 people were murdered last year alone.

Sastre's phone didn't stop ringing and almost every political party made overtures hoping to cash in on her sudden fame, recognizing her instant marketability.

She opted for the conservative Party of the Republic and became one of 35 armed forces candidates to earn seats in parliament, twice the number prior to the October 7 general election.

Although she proved highly popular, Sastre's campaign wasn't without controversy.

She had to pull the shooting video for a few days after an appeal by two leftist parties that said it incited violence, but the courts subsequently sided with Sastre.

"I used it to show what people go through day after day, the violence we suffer," said Sastre, who added that it's unlikely she would use the video again.

"The bad guys are very well armed, even better than the police. We want good citizens to be free to carry arms so they can defend themselves," she said.

Although she didn't join Bolsonaro's Social Liberal Party, she is supporting the ex-army captain in Sunday's presidential run-off, where he is widely expected to defeat leftist Fernando Haddad.

Bolsonaro has a reputation for making outlandish statements many deemed misogynist, racist and homophobic.

The social media "EleNao" (Not Him) movement has seen thousands of women rally against Bolsonaro's candidacy, but Sastre isn't among them.

She says that opposition is because Bolsonaro says he's against feminism.

"I'm also against feminism," she insisted. "Women don't need to unite to get something done. If they want to do something, just go out and do it."

In a country terrorized by the fear of violence, Sastre feels there are more important issues, where ex-army captain Bolsonaro's tough on crime stance resonates.

"People can no longer tolerate violence and that's why there are so many military in politics now, to try to resolve what's going on," she said.

Now, after 21 years working for the military police, she's about to enter the reserves so that she can embark on a career that six months ago would have seemed unimaginable.

"But once you're military, you are forever," she added.