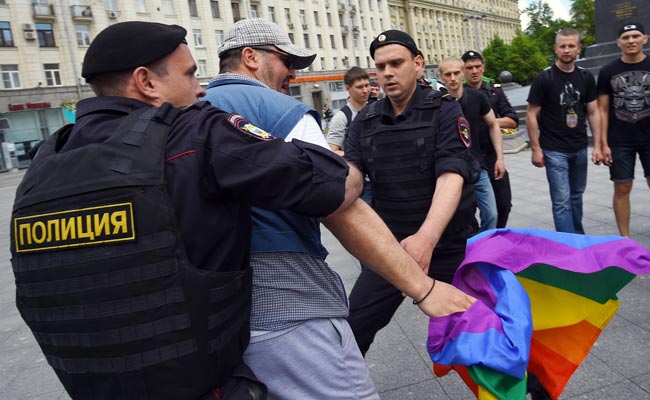 Gay and LGBT rights activist Nikolai Alexeyev (R) holds a flare as he rides a quad-bike during an unauthorized gay rights activists rally in central Moscow on May 30, 2015. (AFP Photo)

Moscow, Russia: The organiser of an unauthorised gay pride rally in Moscow was jailed for 10 days today along with two other activists for disobeying police.

The event's main organiser, Nikolai Alexeyev, was jailed after being detained by police at Saturday's brief protest outside the Moscow mayor's office.

"The court hearing was a farce!" he wrote on Twitter.

On Saturday Alexeyev rode past the mayor's office on the main Tverskaya Street on a quad bike decked with a rainbow flag and waving an orange smoke flare. The mayor's office had refused permission for a rally and a court rejected activists' appeal.

Police detained around a dozen people at the rally after some 30 nationalist counter-demonstrators in camouflage clothing and football fans hurled eggs at the activists and attacked them.

Gays in Russia face regular harassment and requests to hold pride parades have been consistently rejected by authorities in the capital.

The law has been widely condemned in the West as stoking intolerance.

Russia decriminalised homosexuality in 1993, and only stopped classifying it as a mental illness in 1999.