Lima's Mayor Jorge Munoz said the bus burst into flames at a bustop that authorities had banned just weeks ago because it was located next to an illegal shop that sells fuel. 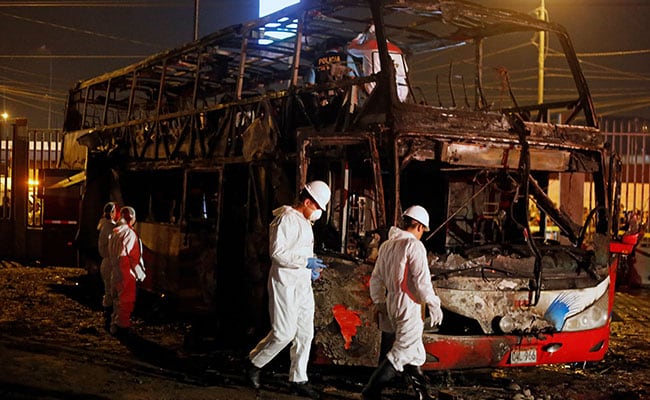 The cause of the fire is under investigation, officials said. (Reuters)

At least 20 people were killed and eight injured when the double-decker bus they were traveling in caught on fire in the Peruvian capital Lima on Sunday, a spokesman for the country's firefighters said.

Witnesses said the fire started in the bus's motor at the rear of the vehicle and quickly spread to its interior, according to the spokesman Lewis Mejia, in broadcast comments on local TV channel Canal N.

The cause of the fire is under investigation, he added.

Lima's Mayor Jorge Munoz said the bus burst into flames at a bustop that authorities had banned just weeks ago because it was located next to an illegal shop that sells fuel.

"It appears that on the second floor of bus, where most of the victims were found, they were transporting fuel. That's a very serious matter," Munoz told journalists in broadcast comments before visiting survivors at a local hospital.

Eight units of firefighters were deployed to put out the fire on the bus, which had been headed to the northern coastal city of Chiclayo, according to local broadcaster RIP.

TV images showed the scorched remains of the vehicle surrounded by crowds of people in the district of San Martin de Porres on the outskirts of the capital.

Authorities in Lima have repeatedly failed to reign in the city's so-called "informal" transportation system, a chaotic network of independent and unauthorized vans and buses used by millions of people every day.

Munoz vowed to punish the owners.

"They have defied a municipal order...I'm completely outraged," Munoz said. "These people must be removed and criminal sanctions will be sought.