Police estimated the crowd at 2,500, making it one of the largest protests in U.S. states against lockdowns over the past week. 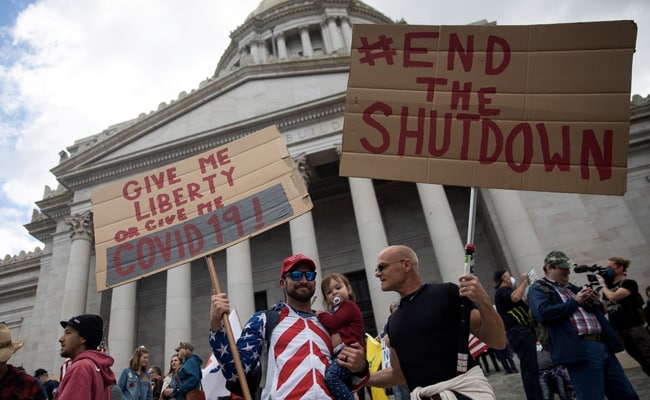 An estimated 2,500 people rallied at the Washington state capitol on Sunday to protest Democratic Governor Jay Inslee's stay-at-home order to limit the spread of coronavirus, defying a ban on gatherings of 50 or more people.

Despite pleas from rally organizers to wear face coverings or masks, many did not.

Police estimated the crowd at 2,500, making it one of the largest protests in U.S. states against lockdowns over the past week. In Olympia, hundreds gathered in close quarters on the steps of the capitol building and around a fountain, contravening state and federal health guidelines during the novel coronavirus pandemic.

"Shutting down businesses by picking winners and losers in which there are essential and non-essential are violations of the state and federal constitution," rally organizer Tyler Miller, 39, an engineer from Bremerton, Washington, and a Republican precinct officer, told Reuters.

"There is no question whatsoever the defense of liberty means risking all hazards," Miller said, paraphrasing a John Adams quote. "The American Revolution was fought at the height of the smallpox epidemic. Our founders were very aware of these sorts of risks."

Crowds remained on the capitol grounds after the scheduled finish of the rally, but Washington state police did not issue any citations, said spokesman Chris Loftis.

Trump on Friday tweeted support for similar protests in Michigan, Minnesota and Virginia to "liberate" them from social distancing rules.

While Miller stopped short of describing his rally as an effort to liberate Washington, he said, "It gives me comfort that he's got my back."

Earlier on Sunday, Inslee said state Republican lawmakers were supporting rebellion against his social-distancing rules that have largely shut down the economy.

"Comments in the news by some Republican legislators calling for 'open rebellion,' claiming a 'deep state' plot and other radical statements are irresponsible and could needlessly lead to more people getting sick," Inslee, a Democrat, said in a statement.

"I support free speech. But crowd counts or speeches won't determine our course. This isn't about politics. It can only be about doing what is best for the health of all Washingtonians."

Washington state had the nation's first confirmed coronavirus case in late January and the first deadly cluster at a nursing home outside Seattle.