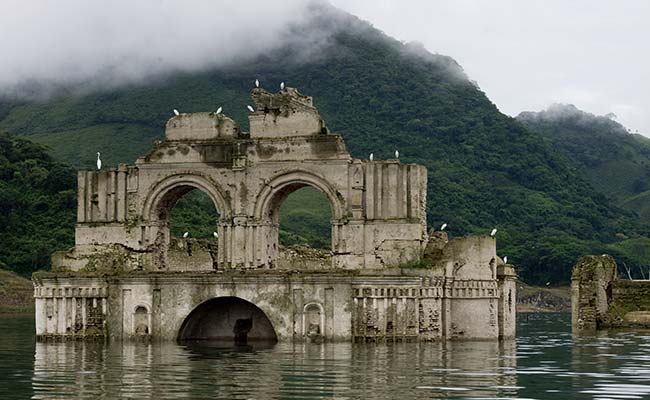 View of the Temple of Santiago built in the 16th century, which has been partially exposed due to the lowering of the water level of the Malpaso dam in Chiapas state on October 21, 2015. (AFP Photo)

Tecpatan, Mexico: A 16th century church submerged in a southern Mexico dam project 49 years ago has reappeared following a severe drought, drawing visitors by boat to gaze at the spectacular ruins.

The Apostle Santiago church, built by Dominican friars, vanished under water in 1966 when the hydroelectric dam was built in the Grijalva river.

Between 1,000 to 2,000 indigenous Zoque people who lived in Quechula, as their town was named, were relocated and their homes were submerged.

Around half of the 15-meter (49-foot) high church, which no longer has a roof, emerged in recent weeks in the Nezahualcoyotl reservoir.

Birds have been landing on the ruins and vegetation has grown on the stone, while Juan Alvarez Diaz has used his 10-seater boat to take visitors to the church.

It's not the first time that the church reappears. The last time was in 2002, when the entire, 60-meter long building could be seen.

At the time, the Zoques population "organized a pilgrimage to the church" and brought the statues of the patron saint Apostle Santiago and the Virgin of Guadalupe, which they had rescued before the reservoir was built, Alvarez said.

But the water level has risen again as Chiapas has seen heavy rainfall since Sunday.

US Still Ready To Meet Iran, Not "Dogmatic" On How