Rescuers were searching for 14 others still missing after floods hit the Kumamoto region on the southwestern island of Kyushu, destroying houses, sweeping away vehicles and causing bridges to collapse. 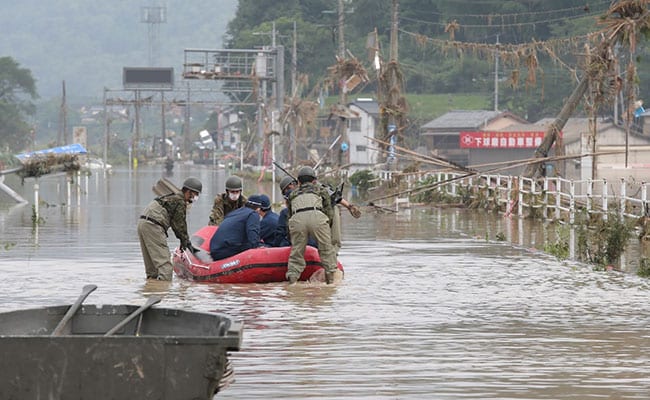 About 34 people are either confirmed or feared dead -- including 14 at a nursing home -- after torrential rain in Japan triggered massive floods and mudslides, authorities said Sunday.

Rescuers were searching for 14 others still missing after floods hit the Kumamoto region on the southwestern island of Kyushu, destroying houses, sweeping away vehicles and causing bridges to collapse.

The regional government confirmed 18 people had died, while another 16 were declared in a state of "cardio-respiratory arrest" -- a term often used in Japan before a doctor officially certifies death.

Fourteen of those feared dead were at a nursing home inundated when local rivers broke their banks. Emergency services rescued 50 people from the facility.

"Tables and sofas were floating around and you could not move," an official, who helped lead rescue efforts at the home where his wheelchair-bound elderly mother was among the victims, told private TV network JNN.

Japan almost always suffers from flooding during its rainy season but rescue and evacuation efforts this year have been further complicated by the coronavirus outbreak.

Authorities at emergency shelters made evacuees wash their hands, wear masks and maintain social distance to avoid the virus adding to the problems.

"We will do our utmost to prevent the spread of the infection and make the lives of those who had to flee their home as comfortable as possible," Disaster Management Minister Ryota Takeda told reporters after visiting a gymnasium in Hitoyoshi city where 600 residents are sheltering.

At a cabinet-level meeting in Tokyo on the disaster, Prime Minister Shinzo Abe pledged financial support, while warning residents in Kumamoto to brace for more rain.

"As we speak, more than 40,000 personnel from police, fire, coast guard and Self-Defence troops are conducting search and rescue operations which will continue through the night," Abe said.

"Saving lives is our priority."

Heavy rain is expected in the region through Monday, Abe added.

"We must remain vigilant," he said, warning residents to monitor news for further risks associated with flooding and landslides.

"This is too harsh"

Communities along the Kuma River, which passes through Hitoyoshi, have been hit hard by the floodwaters.

Although the rain had eased in Kumamoto by Sunday morning, collapsed bridges and blocked roads due to flooding and mudslides have left many isolated in the region.

A large "SOS" sign was created on the grounds of what used to be an elementary school in Yatsushiro city, where about 10 people waved white towels at rescue and media helicopters.

Rescue workers and troops from the Self-Defense Forces used boats and helicopters to reach those stranded. Television footage showed choppers winching people to safety from homes surrounded by muddy water.

Although Japan has been relatively spared by the coronavirus compared to other major economies -- with fewer than 20,000 cases and 1,000 deaths -- local business owners said the flooding was an additional blow.

The manager of a tour bus company in Hitoyoshi feared that the rain had destroyed all 23 of his buses.

"We were just saying that in this time of the coronavirus, we just have to hang in there and we were trying to cheer ourselves up to stay motivated," he told public broadcaster NHK.

"Then came this natural disaster. I just don't know what to say," he said, fighting back tears.

A young man trying to clean a mud-covered restaurant in Hitoyoshi told JNN: "After corona, we have this. This is too harsh."