When asked what he likes most about the US President, Mr Krishna said he was most impressed by Donald Trump for his straightforwardness and candour. Bussa Krishna, who considers himself Donald Trump's "fan for life" unveiled a statue on Trump's birthday

A young man from Telangana's Konnea village, who unveiled a six-feet statue of US President Donald Trump last week, said on Wednesday that he believes Donald Trump had something to do with India's win over Pakistan at the recently-held world cup match. He also said that he observes a fast every Friday for the American leader.

Bussa Krishna unveiled the statue on the occasion of Donald Trump's birthday on June 14 and carried out a traditional Indian ceremony and prayer service in his honour.

"I have installed Donald Trump's statue on his birthday and I pray to him like a God. For the first time, I saw Trump in my dream and it (recently) repeated for the second time. On the day of the India vs Pakistan cricket match, I saw him in my dream and thankfully India won the match. Since then, I have even kept Trump's picture as a wallpaper in my mobile," he told news agency ANI.

He went on to say that "I installed Trump's statue with my own money and it cost me around Rs 1.3 lakh. After installing his statue many people are calling me a Trump fan. I also observe a fast every Friday for Trump. I will live as a Trump fan and die as a Trump fan." 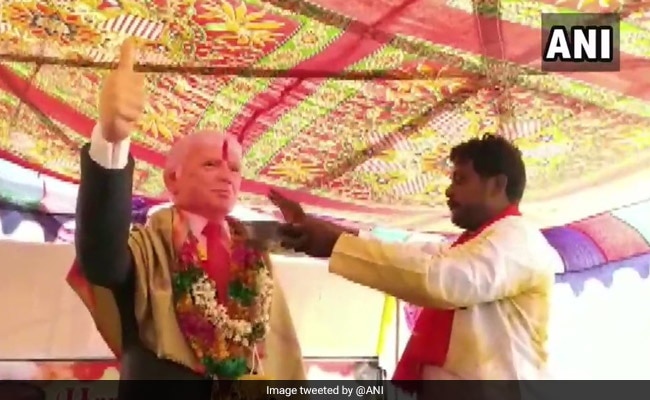 Another villager said, "I thought Krishna has gone mad as he was worshipping Trump. He has repeatedly performed pujas (prayer ceremonies) for the last three years. Later, I started respecting him for his passion. He also celebrates Donald Trump's birthday in a grand manner."

When asked what he likes most about the US President, Mr Krishna said he was most impressed by Donald Trump for his straightforwardness and candour.

Mr Krishna's appreciation and devotion for Donald Trump has even got the attention of the media abroad, a lot of whom have come to cover his story in recent times.