From 800-Metre To 8-Km Detour, Secunderabad Residents vs Cantonment

Residents in Telangana's Secunderabad are protesting against closure of 21 roads in the cantonment area. Demanding right of way, the residents said walls have been built across the roads, or barricades and security checks have been put up, blocking their way.

For over seven years now, residents in north and northeast Hyderabad have been protesting what they call alleged illegal closure of 21 roads in Secunderabad Cantonment area by the local military authority. For some, this has led to a detour of 8 km from what used to be an 800-metre commute.

Though the Andhra Pradesh High Court had allowed the closure in September 2014, citing security reasons, subsequently on appeals from the residents, the then Defence Minister Nirmala Sitharaman and the Army Headquarters in May 2018 had ordered that the roads should be opened.

Yet, the residents say, the local military authority has not complied and even walls have come up, blocking passage. Under the RK Puram ROB or road overbridge, for instance, the service road has been blocked by building a wall and lawns have been extended inside. In Bolarum Golf Course, roads have gone under the extended golf course. 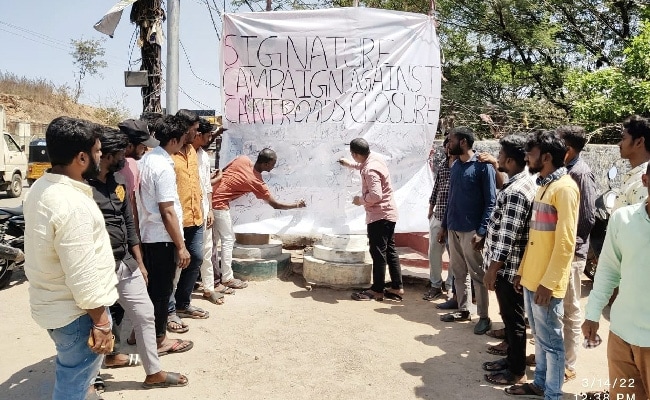 Chief Minister K Chandrasekhar Rao said that unlike other cantonments, the land in question belonged to the state government

"We request the Defence Minister, Army Headquarters, Chief of Defence Staff to immediately intervene and reopen these roads closed illegally by the local military. If you have to close it, close it as per procedure," said CS Chandrasekhar, secretary of Federation of North Eastern Colonies.

"We have to be heard. We civilians have a voice and our objections are valid. Our ambulances are being barred. Our senior citizens are going through hell. We don't have a streetlight on this 3.5-km road," Mr Chandrasekhar said, pointing out that due procedure has not been followed to close any of the roads.

"The central government in the cantonment and the local military authorities are unnecessarily harassing our Hyderabad citizens. We have complained several times. They close roads, they build check dams to stop drains. This is not good. Telangana is not a separate country. We won't hesitate to take harsh action like cutting water or power supply. We need to live together, co-exist. On behalf of our people, we may have to do this, in order to convince them," KTR said in the state assembly.

Chief Minister K Chandrasekhar Rao said that unlike other cantonments, the land in question belonged to the state government.

There are 62 cantonments in India and they were originally set up by the British to house troops, troop families and civilians who supplied goods and services to the troops. Central government directly administers the cantonments.

All those that were under British India were passed on to the central government. But Hyderabad was a princely state, not in British India, or in independent India at the time of independence and the Nizam had handed over the land to the state.