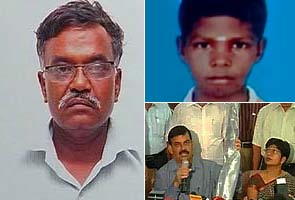 Chennai: It's judgment day in the Dilshan murder case in Chennai. In July last year, the 13-year-old boy from a slum had been shot dead, allegedly by retired Army officer Kandasamy Ramaraj while he was plucking almonds from a tree in the Island Grounds Army Residential complex in Chennai.

The accused, 58-year-old retired Lieutenant Colonel Ramaraj, was an Assistant Engineer in the Arms Section of the Electrical Mechanical Department. He has been charged under Section 302 of the Indian Penal Code (IPC).

Following a public outcry, Tamil Nadu Chief Minister Jayalalithaa ordered a probe by the Crime Branch. As there were no eyewitnesses, the police had to trace mobile phone signals to verify the movements and presence of the officers in the quarters; they even send divers to recover a weapon that was allegedly used by the retired Army officer to commit the crime.

According to the police, though initially they came to know there were only three children at the time of incident, it later came to light that there was a fourth boy who informed them about a senior Armyman who tried to erase the evidence.

With the help of fourth boy, police could zero in on Mr Ramraj. The police said Dilshan was shot in the head with a Sringfield Rifle.

The Tamil Nadu government later handed over the case to CB-CID. The post-mortem report confirmed the teenager died due to a bullet injury in the head. The ballistic report said the shrapnel found from Dilshan's body and the injury matched the ammunition used to fire from the weapon recovered.

A fast track court has so far examined over 50 witnesses. The police are confident of getting a conviction in the case. Dilshan's mother wants the culprit to be awarded at least life imprisonment.

Promoted
Listen to the latest songs, only on JioSaavn.com
The Defence lawyer, however, maintains that the Retired Lieutenant Colonel has been framed in the case and that there was no intention or motive to kill the boy.