Cruising across the Silicon Valley of India, MYn offers an alternative, cancellation-proof cab booking service to the masses 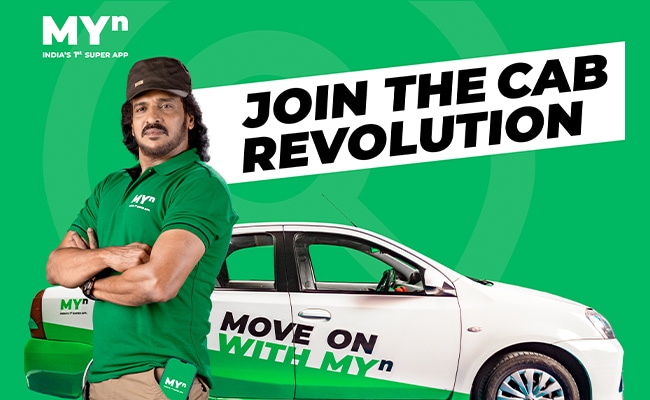 Increasing reliance on the ride-hailing apps has given rise to problems with these ride-booking services, in Bengaluru. Harried commuters in the city complain about constant cancellations, delayed ride bookings, unpredictability of availability, and most of all, surge prices on their regular app-based cab services. From drivers requesting cancellations from the passenger's end, or hassles in planning travel budget due to unforeseen surge fares, commuters have gotten delayed, have had to pay heavy surges at high demands, and also cancel plans last minute. While the city's commuters deal with these regular issues of a convenience-centric service, a new, alternate solution takes the city by storm - MYn.

MYn, India's first Super App, launched by Multiverse Technologies Pvt. Ltd., is an all-purpose system built for users, creators, service providers, and small and large enterprises alike. It is a digital revolution that is committed to data privacy like no other app in the business. Driven by the zeal to fundamentally solve the issue of hefty commissions for service providers, data privacy for internet users, eradicate targeted advertisements, and provide a lot more secure online experience, MYn is one single system that does it all. From providing a chat space that is secure to the core, a social media feed sans all forms of targeted advertisements, and enabling ownership and autonomy for traders, drivers, and content creators, MYn is a super app that unites all use cases that are found in other commonly-used apps, with the added benefit of absolute data privacy.

While the country rapidly moves towards absolute digitalisation, MYn's bird-eye-view integrates what the other digital approaches have failed to see – the human essence of any system. By humanising every use-case that the app delivers, MYn is a connection rather than an application. ‘MYlocal' is one such crucial facet of MYn. Driven by the purpose to foster accessibility and convenience in our day-to-day life, MYn's MYlocal feature is the ride-hailing alternative in the city for users to book cabs and autos. Taking the city by storm as the next best reliable cab app, and on boarding more than 10,000 cabs in a span of one month, drivers on MYn are empowered with absolute ownership and autonomy of their service, as they do not pay any commission and are not owned by aggregators. Moreover, with a unique and rounded approach to benefit the drivers, MYn allows for healthy and flexible work timings that leave room for them to attend to personal commitments – an advantage no cab aggregator in the market can promise today. As for the user, this ground breaking solution has a surge-free model where the latter only pays the fare approved by the Government – making the user friendly app workable across the country and equally appealing for customers (drivers) and the users (us).

MYn has partnered with Karnataka's favourite superstar, Upendra as their brand ambassador. MYn and the star have amplified and announced the MYlocal launch as the disruption the city needs. As of today, MYn has upstaged itself by on boarding 15,000 cabs (and counting) onto the app and launching it at a grand scale in 2022, MYn is sturdily riding the revolution towards changing the way we travel. More than 15,000 drivers have chosen to trust the brand and participate in this journey towards progress. With referral programs, health covers, and instructional inventories at the driver's disposal, MYn is determined to establish and nurture a system where drivers feel gratified and most importantly, valued. Empowered by the offerings of MYn, and the unique opportunity to work with dignity, the service is on a mission to furnish a happier digital transportation ecosystem in the country today. Not only does the super app's MYlocal initiative enable the drivers to explore beyond their profession, but it is also a testament to the value that the community of drivers add to the city's transportation ecosystem.

MYn's MYlocal feature is also an amplification of the Government's “vocal for local” stance, as it encourages everyone to discover, find, and shop from local stores, and help grow local trade and commerce, rather than rely on digital supermarkets with commission-heavy aggregators. It enables Ecommerce for those near us, whether it is products or services, on its unique map interface, thus, increasing digital discoverability for local businesses, and solving the Ecommerce experience issue faced by regular people daily. As a never-been-before social commerce ecosystem, MYlocal is a technological disruption in the world of local Kirana stores in India.

A revolution in the digital cosmos, MYn – pronounced as “mine” to reinforce the feeling of complete ownership, takes the definition of ‘super app' up a notch by facilitating other multifaceted experiences, such as call, storage via the MYown feature, social media and content consumption via the MYworld feature, digital business communication via the MYwork feature, and ride-hailing and proximity commerce via the MYlocal feature – sorting out every individual's day-to-day web experience. Thriving to empower all its consumers, and completed user journeys, MYn, India's first Super App, is a momentous shift from mundane and unreliable cyber systems to a healthy, secure, and revolutionary digital ecosystem.