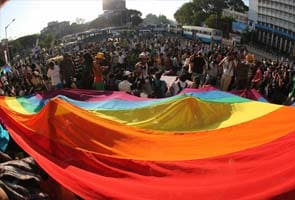 Over a thousand people belonging to the gay community attired in colourful costumes took part today in the 5th annual celebration of 'Queer Pride' in Bangalore.

Attired in colourful costumes and dancing to the beat of drums,they took out a march from Tulsi Park to Townhall as part of the celebrations, organised by the Coalition for Sexual Minority Rights (CSMR).

The 11-day Pride celebrations, which commenced on November 22, are an opportunity to mark the local, national, and global changes (social and political) that have improved the lives of sexual minorities, CSMR said in a statement.

"This is also an opportunity to remember the fierce activism that has gotten us where we are, as well as a chance to commemorate the lives that have been lost to social injustice and hate", it said.

"Bangalore Pride is our opportunity to reject the invisibility of our marginalisation, to rejoice that we are here and will always be here. We have been deprived of our voices, our right to be ourselves, and even our citizenship.

But we are not fighting a losing battle. Section 377 (IPC unnatural offences) is, for the moment, no longer a threat", the statement said.

Promoted
Listen to the latest songs, only on JioSaavn.com
A welfare board has been set up for transgenders in Karnataka and schemes for pension, housing, and voter ID cards are being discussed. Many same sex couples are now living a fulfilling life together, Soumya Reddy, one of the organisers of the parade, said.

"He Has Proved Himself": Telangana Ministers On "Chief Minister KTR" Buzz