The sit-in was also organised to protest the Karnataka government's alleged insensitivity to the problem of farm loan waivers, which they claimed had been "dumped in the cold storage", and the IMA Jewels Ponzi scheme 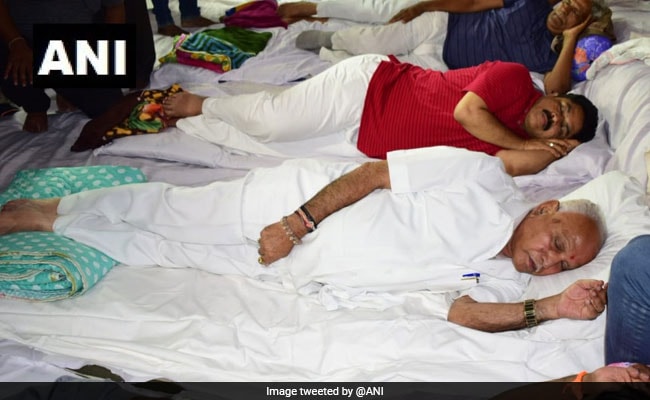 BJP Karnataka president BS Yeddyurappa spent yesterday night participating in the second day of a two-day round-the-clock sit-in to protest the sale of 3,667 acres of land to JSW Steel at "throwaway" prices. The BJP has alleged the sale of the land at only Rs 1 lakh per acre will provide the ruling Congress-JDS coalition with "kickbacks".

The sit-in was also organised to protest the state government's alleged insensitivity to the problem of farm loan waivers, which the BJP has claimed has been "dumped in the cold storage", and the IMA Jewels Ponzi scheme.

Karnataka: BJP State Chief BS Yeddyurappa and other BJP leaders during the party's all night dharna in Bengaluru against the JSW land deal. BJP has alleged that the state government would get kickbacks once the deal is finalized. pic.twitter.com/DUK1FmNkGM

The Karnataka government had earlier been embarrassed by Congress veteran HK Patil questioning the land deal with the Sajjan Jindal-helmed firm.

Mr Yeddyurappa had suggested earlier this month that the Congress-Janata Dal Secular coalition government instead give 1,000 acres of the land to JSW Steel on lease.

Caught in the middle of a row, the Karnataka government yesterday referred the JSW Steel land sale decision to a cabinet sub-committee, members of which have yet to be named, for re-consideration.

The BJP also criticised the state government for failing to keep its promises with regard to farm loan waivers, particularly in the face of prevailing drought situation and drinking water crisis facing farmers across large regions of Karnataka.

"Our main contention is that the farm loan waiver has been dumped in the cold storage. They (government) said they would waive loans of Rs 46,000 crore but so far not even Rs 3,000 crore loan has been waived. In some areas, the loan amount has been taken back," the former Karnataka Chief Minister said.

Demanding to know how much money had been released by the BJP-ruled central government, Mr Yeddyurappa attacked Chief Minister HD Kumaraswamy for "not coming out of his comfort zone" and not meeting suffering farmers.

"Drought is intense but nobody has gone to see the condition of the farmers. The chief minister is not coming out of his comfort zone and is meeting only the businessmen. Now he is going to villages under his "Grama Vastavya (village stay)" programme. People will not appreciate it," the BJP leader claimed.