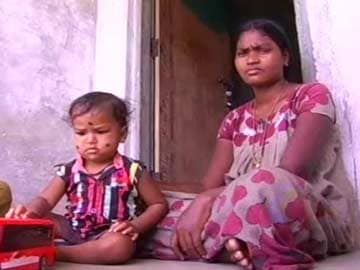 The new-born baby of Silvi Eashwar (in the photo), from Kerala's Attapady, died of severe malnourishment

Attapady, Kerala: Behind the scenic beauty of Attapady, a tribal village in Kerala's Palakkad district, hides a terrible reality: rampant malnourishment among its children.

One of those children is one-and-a-half-year-old Suja from the hamlet of Paloor, who is four kilograms underweight and severely malnourished.

Last year, the village had lost 51 children to malnourishment.

Though the government has taken several steps to curb infant deaths since then, those could not help Silvi Eashwar, from Paloor, who lost her new-born baby recently.

"My child was underweight. Doctors said she died because she was unable to breathe," she says.

Dr Subhash, who works at the government hospital in Attapady, regularly conducts field visits to check on these women.

"Most of the children here are moderately malnourished. But when that is coupled with sickness and infections, it becomes a case of severe malnourishment, sometimes leading to death," he says.

A report by the National Rural Health Mission states that of the 4,841 children in Attapady who are under five years of age, as many as 572 are malnourished; 127 of those cases are 'severe'.

Meanwhile, official records claim that only 250 children in the region are malnourished.

The report blames the 'lack of nutritious food and proper healthcare for tribal women" for the malady.

"Most pregnant women here are anaemic. The issue is not about food alone, it is also about changes in their way of living. Traditionally, they survived on subsistence agriculture. But now, most of them depend on market products," says Rajendra Prasad, head of a local NGO.

The steps taken by the government include setting up a nutrition rehabilitation centre and anganwadi systems, ensuring prompt cash payments to pregnant women and providing medical officials on the field.

Promoted
Listen to the latest songs, only on JioSaavn.com
VR Madhu, the Associate Project Officer who is in-charge of implementing these schemes, says, "We have also developed a software to periodically monitor the condition of the tribal women. But the NRHM report needs to be studied further."

That these measures work, sometimes, is proved by Shainesh, the one-year-old son of Marianatha, a local woman. Born as one of the many underweight children of Paloor, today he is a healthy and well-nourished boy.