Neptune's Tiny New Moon, Could Be Fragment Of It's Larger Moon Proteus

The moon, dubbed Hippocamp is about the size of Chicago and so faint only the powerful Hubble Space Telescope can spot it 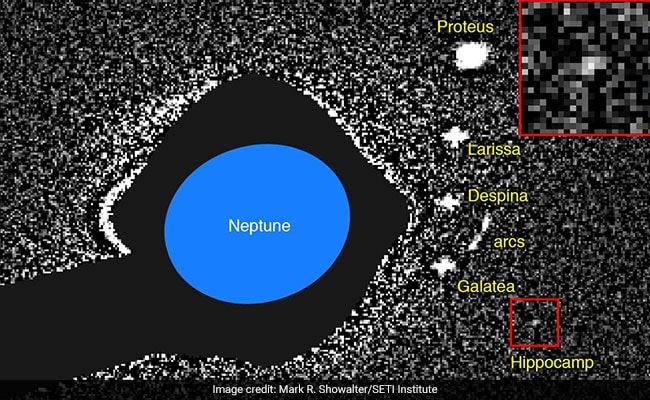 The earliest image of Hippocamp, obtained by the Hubble Space Telescope in 2004

A diminutive nugget of a moon has been discovered lurking in the inner orbit of Neptune.

The moon, dubbed Hippocamp for the half-horse, half-fish sea monster from Greek legend, is about the size of Chicago and so faint only the powerful Hubble Space Telescope can spot it. But by examining data stretching more than a decade, researchers were able to discern its dim form from 3 billion miles away.

"Being able to contribute to the real estate of the solar system is a real privilege," said planetary scientist Mark Showalter, the lead author of a study on the discovery published Wednesday in the journal Nature. "But it shows how much we still don't know about the ice giants, Neptune and Uranus."

Showalter and his colleagues suggest Hippocamp is a fragment of a larger neighboring moon called Proteus, broken off during a cataclysmic collision some 4 billion years ago.

Neptune has been explored just once in human history, with a brief flyby of the Voyager 2 spacecraft in 1989. "But there are all these interesting processes going on there, that we only got a glimpse of," Showalter said. "Atmospheric phenomena, rings with peculiar properties . . . and these collisions and breakups that formed the inner moons."

"It's not just a dinky little moon we've found," he continued. Moons such as Hippocamp "are witnesses to the formation and evolution of the planets they orbit. In my mind, they have very interesting stories to tell."

Showalter, a senior research scientist at the Search for Extraterrestrial Intelligence (SETI) Institute in Mountain View, California, is something of a distant moon detective. By accumulating scores of long-exposure Hubble images, then adjusting them to account for an orbiting body's predicted movement, he has already uncovered two new moons each around Pluto and Uranus.

The resulting images "are not pretty," Showalter said. The planets are so overexposed they become big white blotches, and the moons at their centers are little more than pale dots. The procedure generally does not capture enough data from the moons to allow scientists to take spectra - splitting light into its component parts to reveal clues about the moons' composition.

Hippocamp is the first new inner satellite found around the solar system's outermost planet since the Voyager 2 flyby. 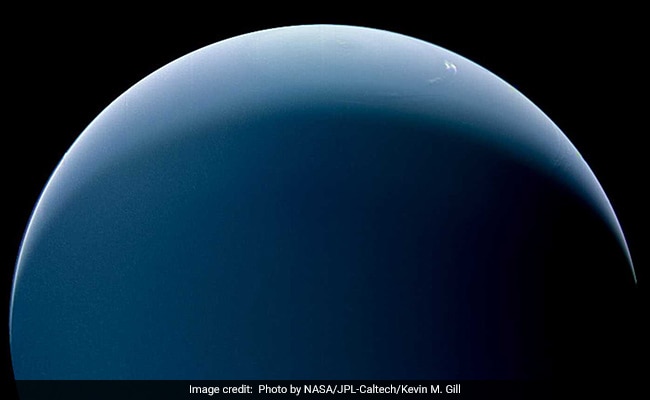 Neptune has been explored just once in human history, with a brief flyby of the Voyager 2 spacecraft in 1989

Researchers were initially surprised to find the tiny rock so close inside the orbit of Proteus, which is more than 100 times its size. Observations suggest tidal forces have been slowly pushing Proteus away from Neptune; a few billion years ago, it would have sat right where Hippocamp is today.

"Our initial thought was that's a very strange place to find a moon," Showalter said.

Proteus also has a massive crater on its surface, called Pharos, likely left behind after an impact from a comet or another passing object that nearly destroyed the moon at some point in its history.

Perhaps, Showalter and his colleagues suggest, Hippocamp is some of the shrapnel from that ancient collision. Only by sending a spacecraft back to the Neptune system to compare the worlds' compositions can scientists know for sure.

Though the outer solar system is sometimes seen as dark, cold and dreary, the story of Hippocamp demonstrates how much activity has gone unnoticed in this distant region, said Kathleen Mandt, a planetary scientist at the Johns Hopkins University Applied Physics Laboratory who was not involved in the new research.

Scientists say Neptune's icy largest moon, Triton, is an object acquired from the Kuiper belt sometime after the planet's formation. Its arrival probably jostled the inner moons, causing collisions that flung some bodies outward and fragmented others.

In addition, many of the exoplanets, or planets outside our solar system that have been discovered orbiting other suns, are roughly the same size and mass as the ice giants. Further study of Neptune and Uranus could offer insight into those even more alien worlds.

"There is a lot each of these systems can tell us that we don't know because we haven't had the opportunity to visit and stay long enough to see it," she said.

During the planetary science community's last 10-year survey of goals for space exploration, scientists named a large-scale mission to one or both of the ice giants among their top three priorities. Mandt served on a NASA committee to outline what such a mission might look like, but nothing has been funded. The project will likely be bumped to the next decanal survey.