The raft spotted by the Hoults has been compared in size to Manhattan, Washington and 20,000 football fields 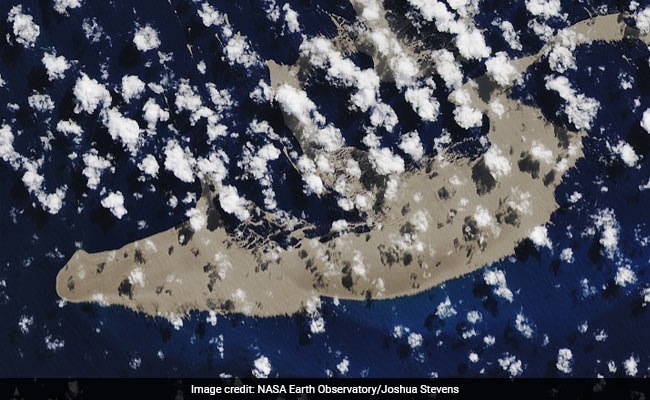 Michael and Larissa Hoult were sailing from the Vava'u islands of Tonga to Fiji in the South Pacific Ocean when they saw it - a "total rock rubble slick" extending for miles around them. The rocks, some the size of marbles and others as big as basketballs, bumped against their boat and clogged their rudders.

"It was quite eerie, actually," Larissa Hoult told CNN. "The whole ocean was matte."

The couple had sailed upon what scientists call a "pumice raft," a mass of floating, porous rock that forms when a volcano erupts from the ocean floor. The hot lava, full of gas bubbles, cools in the ocean water and produces pumice, which floats to the surface above the eruption.

The raft spotted by the Hoults has been compared in size to Manhattan, Washington and 20,000 football fields.

The Hoults had received an Aug. 14 email warning of "pumice fields," which had been spotted by other sailors and detected from space by NASA satellites. By the evening of Aug. 15, they were surrounded by the rocks and their sulfur smell, they said in a post on the Facebook page that tracks their sailing and surfing adventures.

"The rocks were kind of closing in around us, so we couldn't see our trail or our wake at all," Michael Hoult told CNN. "We could just see the edge where it went back to regular water - shiny water - at night."

They posted photos of their discovery to Facebook, and in the week since have received homework assignments from scientists and university professors looking for photos and specimens of the pumice the Hoults collected.

Among them was Scott Bryan, a geologist and associate professor at Queensland University of Technology, who has been studying underwater volcanic pumice for two decades, he told the Australian Broadcasting Corporation.

This mass, he told ABC, is slowly floating toward Australia's coastline - where in seven to 12 months it could arrive with a host of marine life ready to potentially revive the badly damaged Great Barrier Reef.

"In this 150-odd square kilometers of pumice out there right now, there's probably billions to trillions of pieces of pumice all floating together, and each piece of pumice is a vehicle for some marine organism," Bryan told ABC.

Organisms such as algae, barnacles, snails, crabs and possibly even corals could attach themselves to the pumice raft, serving as a "natural mechanism for species to colonize, restock and grow in a new environment," Bryan said.

Warming waters, caused by climate change, have caused devastating bleaching to the Great Barrier Reef, which stretches 1,400 miles off the coast of Australia and is the world's largest coral reef. When ocean heat waves drive nutrient-rich algae from coral cells, they lose their color and begin to die. There are degrees of severity to the bleaching that coral reefs are facing, but the warmer the waters stay - and the longer the nutritious algae stays away - the greater the threat.

The pumice raft has the potential to deposit new, healthy coral around the reef, Bryan said.

"It's just one way that nature can help promote regeneration," he told ABC.

Martin Jutzeler, a lecturer at the University of Tasmania who studies underwater volcanoes, told the BBC that one downside is that pumice rafts can also transport nonnative, invasive species from one ocean habitat to another.

It's possible the raft might not even make it to Australia, he said. Over time, it will probably break apart and disperse.

Terry Hughes, director of the ARC Center of Excellence for Coral Reef Studies at James Cook University in Australia cautioned that if the planet continues to warm, the world's coral reefs won't be saved by a pumice raft or any other technological tools.

"Reefs will be gone unless we tackle anthropogenic heating," Hughes wrote on Twitter, about atmospheric warming caused by human activities such as burning fossil fuels.

He also noted that the pumice raft is just one two-thousandth the size of the Great Barrier Reef, and that coral rarely settles on pumice.

NASA's Terra satellite detected the pumice raft Aug. 9, and the Operational Land Imager on Landsat 8 captured images of it days later on Aug. 13, according to the Earth Observatory at NASA. The photos showed the mass floating near Late Island in Tonga. Around the raft was discolored water, a sign that the volcano that produced it was just below, the Earth Observatory reported.

Shannon Lenz and Tom Whitehead encountered the pumice raft as well, telling the BBC in a video interview that the floating stones had stretched "to the horizon on all sides."

"First we thought it was whale poop," Whitehead told BBC. "But then as it became obvious there was way more of it than any normal-sized pod of whales could come up with."