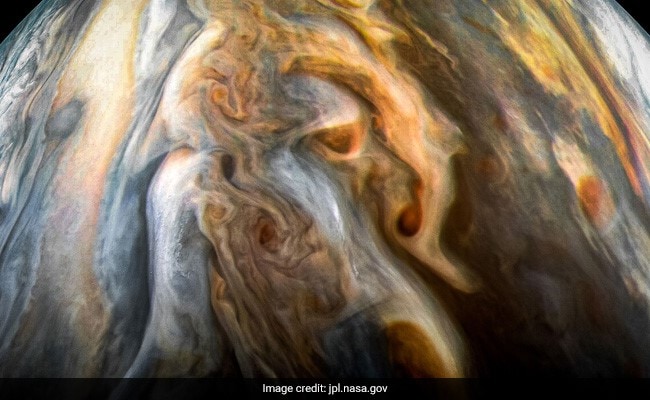 NASA's Juno mission has provided its first science results on the amount of water in Jupiter's atmosphere. Published recently in the journal Nature Astronomy, the Juno results estimate that at the equator, water makes up about 0.25 per cent of the molecules in Jupiter's atmosphere - almost three times that of the Sun.

These are also the first findings on the gas giant's abundance of water since the agency's 1995 Galileo mission suggested Jupiter might be extremely dry compared to the Sun (the comparison is based not on liquid water but on the presence of its components, oxygen and hydrogen, present in the Sun).

An accurate estimate of the total amount of water in Jupiter's atmosphere has been on the wishlists of planetary scientists for decades: The figure in the gas giant represents a critical missing piece to the puzzle of our solar system's formation. Jupiter was likely the first planet to form, and it contains most of the gas and dust that wasn't incorporated into the Sun.

The leading theories about its formation rest on the amount of water the planet soaked up. Water abundance also has important implications for the gas giant's meteorology (how wind currents flow on Jupiter) and internal structure. While lightning -- a phenomenon typically fueled by moisture -- detected on Jupiter by Voyager and other spacecraft implied the presence of water, an accurate estimate of the amount of water deep within Jupiter's atmosphere remained elusive.

Before the Galileo probe stopped transmitting 57 minutes into its Jovian descent in December 1995, it radioed out spectrometer measurements of the amount of water in the gas giant's atmosphere down to a depth of about 75 miles (120 kilometres), where the atmospheric pressure reached about 320 pounds per square inch (22 bar). The scientists working on the data were dismayed to find 10 times less water than expected.

Even more surprising: The amount of water the Galileo probe measured appeared to be still increasing at the greatest depth measured, far below where theories suggest the atmosphere should be well mixed. In a well-mixed atmosphere, the water content is constant across the region and more likely to represent a global average; in other words, it's more likely to be representative of water planetwide. When combined with an infrared map obtained at the same time by a ground-based telescope, the results suggested the probe mission may have just been unlucky, sampling an unusually dry and warm meteorological spot on Jupiter.

"Just when we think we have things figured out, Jupiter reminds us how much we still have to learn," said Scott Bolton, Juno principal investigator at the Southwest Research Institute in San Antonio. "Juno's surprise discovery that the atmosphere was not well mixed even well below the cloud tops is a puzzle that we are still trying to figure out. No one would have guessed that water might be so variable across the planet."

Measuring Water From Above

A rotating, solar-powered spacecraft, Juno launched in 2011. Because of the Galileo probe experience, the mission seeks to obtain water abundance readings across large regions of the immense planet. A new kind of instrument for deep-space planetary exploration, Juno's Microwave Radiometer (MWR) observes Jupiter from above using six antennas that measure the atmospheric temperature at multiple depths simultaneously. The Microwave Radiometer takes advantage of the fact that water absorbs certain wavelengths of microwave radiation, the same trick used by microwave ovens to quickly heat food. The measured temperatures are used to constrain the amount of water and ammonia in the deep atmosphere, as both molecules absorb microwave radiation.

The Juno science team used data collected during Juno's first eight science flybys of Jupiter to generate the findings. They initially concentrated on the equatorial region because the atmosphere there appears more well-mixed, even at depth, than in other regions. From its orbital perch, the radiometer was able to collect data from a far greater depth into Jupiter''s atmosphere than the Galileo probe -- 93 miles (150 kilometres), where the pressure reaches about 480 psi (33 bar).

"We found the water in the equator to be greater than what the Galileo probe measured," said Cheng Li, a Juno scientist at the University of California, Berkeley. "Because the equatorial region is very unique at Jupiter, we need to compare these results with how much water is in other regions."

Juno's 53-day orbit is slowly moving northward, as intended, bringing more of Jupiter's northern hemisphere into sharper focus with each flyby. The science team is eager to see how atmospheric water content varies by latitude and region, as well as what the cyclone-rich poles can tell them about the gas giant''s global water abundance.

"Every science flyby is an event of discovery," said Bolton. "With Jupiter, there is always something new. Juno has taught us an important lesson: We need to get up close and personal to a planet to test our theories."