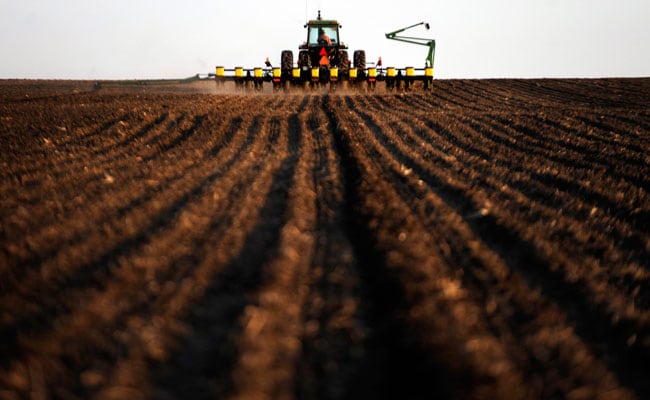 To start, Indigo will pay farmers $15 per ton of carbon, using venture capital raised by the company.

Last month carbon dioxide levels in the atmosphere surpassed 415 parts per million, the highest in human history. Environmental experts say the world is increasingly on a path toward a climate crisis.

The most prominent efforts to prevent that crisis involve reducing carbon emissions. But another idea is also starting to gain traction - sucking all that carbon out of the atmosphere and storing it underground.

It sounds like an idea plucked from science fiction, but the reality is that trees and plants already do it, breathing carbon dioxide and then depositing it via roots and decay into the soil. That's why consumers and companies often "offset" their carbon emissions by planting carbon-sucking trees elsewhere in the world.

But an upstart company, Boston-based Indigo AG, now wants to transform farming practices so that agriculture becomes quite the opposite of what it is today - a major source of greenhouse gas emissions.

By promoting techniques that increase the potential of agricultural land to suck in carbon, the backers of Indigo AG believe they can set the foundation for a major effort to stem climate change. On Wednesday, the company announced a new initiative with the very ambitious goal of removing one trillion tons of carbon dioxide from the atmosphere by paying farmers to modify their practices.

Called the Terraton Initiative (a "teraton" is a trillion tons), the company forecasts that the initiative to sign up 3,000 farmers globally with more than 1 million acres in 2019.

David Perry, the company's chief executive, says he has lined up a group of buyers who will purchase carbon credits, from nonprofits to consumer-focused food companies who could claim their products are not merely carbon neutral, but carbon negative. Farmers will be given training and tools to institute what are known as "regenerative" practices. Indigo scientists will test soil samples for carbon content and farmers will be paid accordingly.

"It's completely outcome-based. We don't really care how you get there. There's no requirement to be big or small, organic or conventional."

At the core is the idea that plants breathe, and through the process of photosynthesis turn carbon dioxide from the atmosphere into sugars that become leaves, stems and roots. When a plant dies, decay brings organic material, a component of which is large carbon-based molecules called humic acids, into the soil and binds them to the soil's molecules. Thus the carbon is "captured" underground. The healthier and more fertile the soil, the more carbon it can store.

The Rodale Institute, a major agricultural think tank, predicts that more than 100 percent of current annual global carbon emissions could be captured with a switch to widely available and inexpensive farming practices - such as not turning the soil over through tilling or plowing; replanting with cover crops after a main crop has been harvested; and rotating through different crops to put a range of nutrients back in the ground.

Merely planting trees won't get the world very far. Large and slower-growing trees can sequester more carbon than smaller plants, but the world faces dramatic deforestation and has enormous agricultural needs. Farming seems like a practical focus for how to mitigate growing atmospheric carbon.

Whether they can get to one trillion tons of carbon is unknown, Perry says, but this represents one of the largest agricultural experiments lately, with software and satellite tools available to every farmer who signs up. The goal is to find out which crops, practices and geographic locations have the ability to drive more carbon into the soil.

To start, Indigo will pay farmers $15 per ton of carbon, using venture capital raised by the company.

Some farmers have already embraced the techniques. Russell Hedrick, a regenerative grower who farms non-GMO and heirloom corn, soy, barley, oats and triticale in Hickory, N.C. has been measuring the carbon in his 1,000 acres and the best he's ever done is 1.5 tons per acre.

He says the Indigo incentives could prove strong, especially at a time when farm bankruptcies are high and crop prices are sagging.

Hedrick says that in 2018, the average American farmer lost about $60 per acre before subsidies, and made just $20 per acre after federal subsidies. So, if a farmer can put a ton and a half of carbon in each acre of soil and get paid by Indigo, they could double their profits.

Hedrick, a first-generation farmer, learned these practices from books and online videos from regenerative farmers. He doesn't till or plow, and he plants a cover crop within 10 days of harvesting a cash crop like corn or soy, mostly small grains with roots that can go down six feet and reduce soil compaction and help retain moisture.

Indigo is not the first organization to encourage farmers to prioritize putting carbon back in the soil. Iowa farmers tried it in the 1990s and the California Healthy Soils Initiative has an incentives program that funds farmers who use practices like compost application, mulching, no-till and cover cropping.

What makes Indigo's initiative different is the scale of the project and its multipronged approach, according to Mark Bradford, an expert in soil and ecosystem science at the Yale School of Forestry & Environmental Studies.

"In soil science, there are all these initiatives to rebuild carbon in soil. The problem is measurement and verification - how do we make this economically and logistically feasible?" he said. "What I'm impressed by is (Indigo) has data science PhDs and they're trying to do peer-reviewable, credible science."

That said, Bradford says the scientific community has far from a consensus on whether this is the right approach. Some wonder if it is feasible to change farmer practices to such an extent and whether herculean efforts will result in meaningful atmospheric carbon reductions. Other scientists worry that a focus on carbon in soil will redirect attention away from minimizing greenhouse gas emissions. And still others think that building up carbon could produce more nitrous oxide gas, which is even more warming than carbon dioxide.

"No one has the models or the data to determine who is right yet," Bradford said. "We have a lack of measurements. (Indigo is) doing the work on the ground to ask if this is feasible."

Perry says that while most farmers are sustainability-minded, it's hard to ask them to make sacrifices to sequester carbon for the good of the planet, especially in the face of so many other financial and climatic challenges. Paying them to make this a priority, he says, is the answer.

"It is the only action we can take today whose impact matches the scale of the problem," he said. "Instead of reducing the speed at which we approach the climate cliff . . . this enables us to start backing away from the climate cliff entirely."

COVID-19 Antibodies May Last From Days To Years: Study Shows What It Depends On