Telescope In Pune Discovers Most Distant Radio Galaxy Ever Found

GMRT is an array of thirty fully steerable parabolic radio telescopes of 45 metre diameter, operated by the National Centre for Radio Astrophysics. 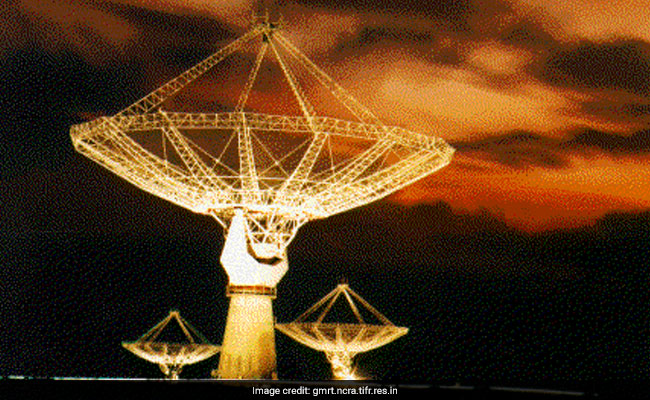 A telescope in Pune discovered the most distant radio galaxy ever, located 12 billion light-years away

Astronomers have used an Indian telescope to discover the most distant radio galaxy ever known, located at a distance of 12 billion light-years.

The galaxy from a time when the universe was only seven per cent of its current age was found using the Giant Meter-wave Radio Telescope (GMRT) in Pune.

GMRT is an array of thirty fully steerable parabolic radio telescopes of 45 metre diameter. It is operated by the National Centre for Radio Astrophysics.

The distance to this galaxy was then determined using the Gemini North telescope in Hawaii and the Large Binocular Telescope in Arizona.

The galaxy is perceived as it looked when the universe was only a billion years old, according to the study appearing in the journal Monthly Notices of the Royal Astronomical Society.

This also means that the light from this galaxy is almost 12 billion years old.

"It is very surprising how these galaxies have built up their mass in such a short period of time," said Aayush Saxena from Leiden Observatory in the Netherlands.

Radio galaxies are very rare objects in the universe. They are colossal galaxies with a supermassive black hole in their centre that actively accretes gas and dust from its surroundings.

This activity initiates the launch of high-energy jet streams, which are capable of accelerating charged particles around the supermassive black hole to almost the speed of light.

These jets are very clearly observed at radio wavelengths.

The fact that such galaxies exist in the distant universe has surprised astronomers.

The discovery of such galaxies at extremely large distances is important for our understanding of the formation and evolution of galaxies, researchers said.

Studying these radio galaxies in detail also sheds light on the formation of primordial black holes, which have driven and regulated the growth of galaxies, they said.

(Except for the headline, this story has not been edited by NDTV staff and is published from a syndicated feed.)
Comments
Radio GalaxyPune TelescopeMost Distant Radio Galaxy

Journey Towards The Sun: NASA To Launch First Sun-Skimming Spacecraft