Where did Iron Man go?

Robert Downey Jr swapped his metal armour for something more suited to the local costume while promoting Iron Man 3 with Gwyneth Paltrow in Munich, Germany. 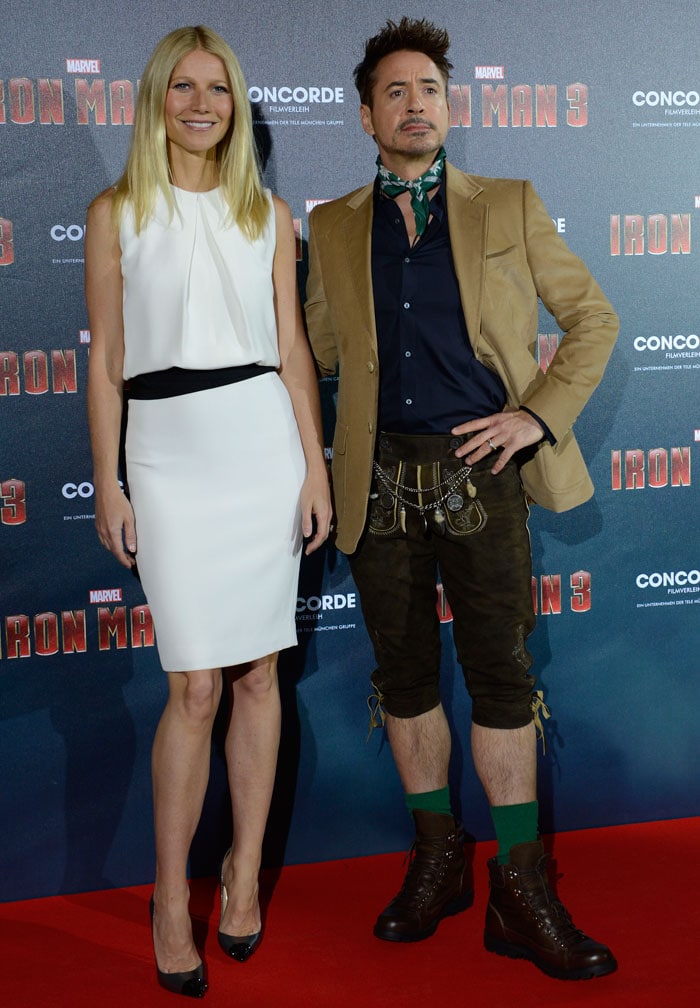 Robert Downey Jr swapped his metal armour for something more suited to the local costume while promoting Iron Man 3 with Gwyneth Paltrow in Munich, Germany.

The actor chose to wear a pair of traditional German lederhosen for the photocall, complete with leather boots and a kerchief wrapped around his neck.

Gywneth Paltrow was her usual elegant safe in a white KaufmanFranco dress, and looked happy enough to be photographed with her quirkily-costumed co-star.

Coming Up: The moment someone tried to grab Will Ferrell's award 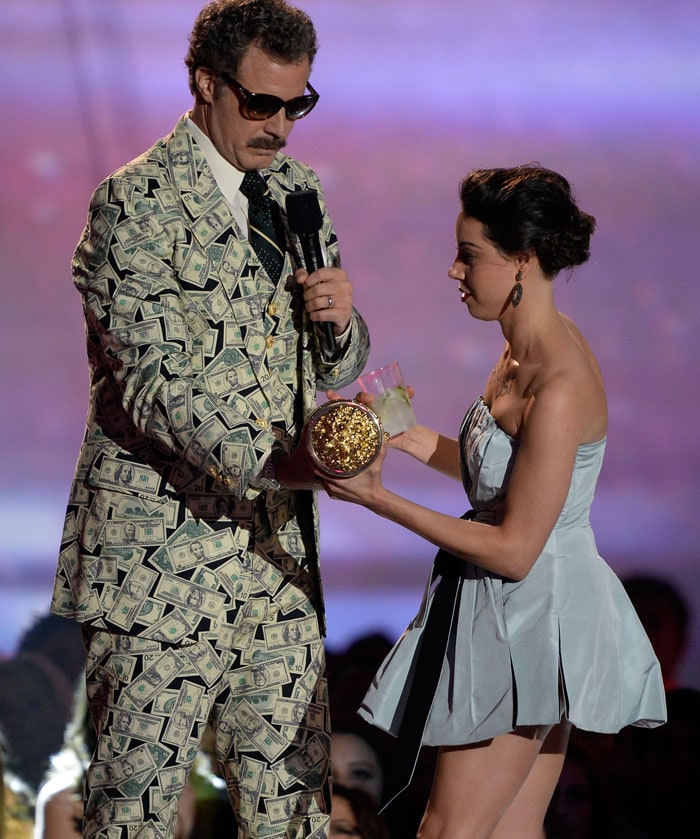 Comedian Will Ferrell, bedecked in a dollar-print suit, had a Taylor Swift moment as he accepted the Comedic Genius Award at the MTV Movie Awards in California. The actor was giving his thank you speech when young actress Aubrey Plaza suddenly walked up to him, barefoot and with a drink in her hand, and tried to grab the trophy away from Will.

According to reports, Will was taken aback but he did manage to defend his trophy from award-crasher Aubrey who then silently left the stage after she failed to snatch the popcorn bag-shaped gong.

Aubrey was later asked to leave the awards function.

At the 2009 MTV Music Video Awards , Best Female Video award winner Taylor Swift was left in tears when rapper Kanye West rushed on-stage, interrupting her speech to say that Beyonce should have won. 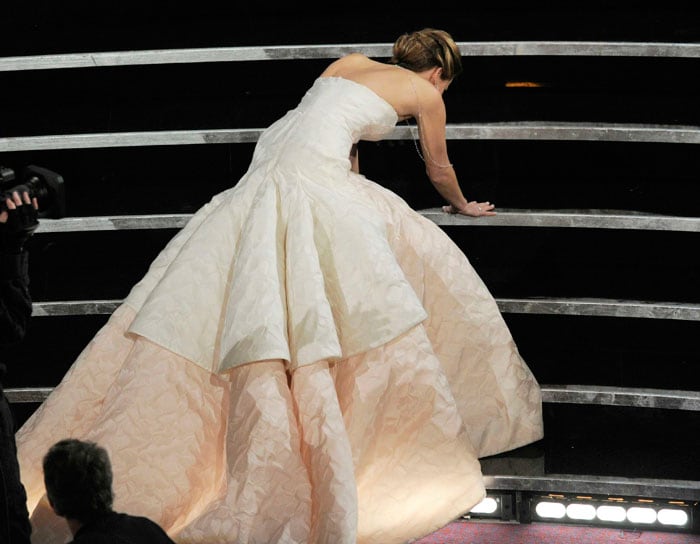 Jennifer Lawrence, who won the Best Actress Oscar for Silver Linings Playbook, was in such a rush to get to her little golden man, that she tripped over the huge skirt of her Dior dress and was photographed sprawled on the stairs that led up to the Oscar podium. Jennifer gamely picked herself up and made a valiant recovery, even joking about her fall in her speech: "You lot are just standing up because you feel bad that I fell, and that's embarrassing." 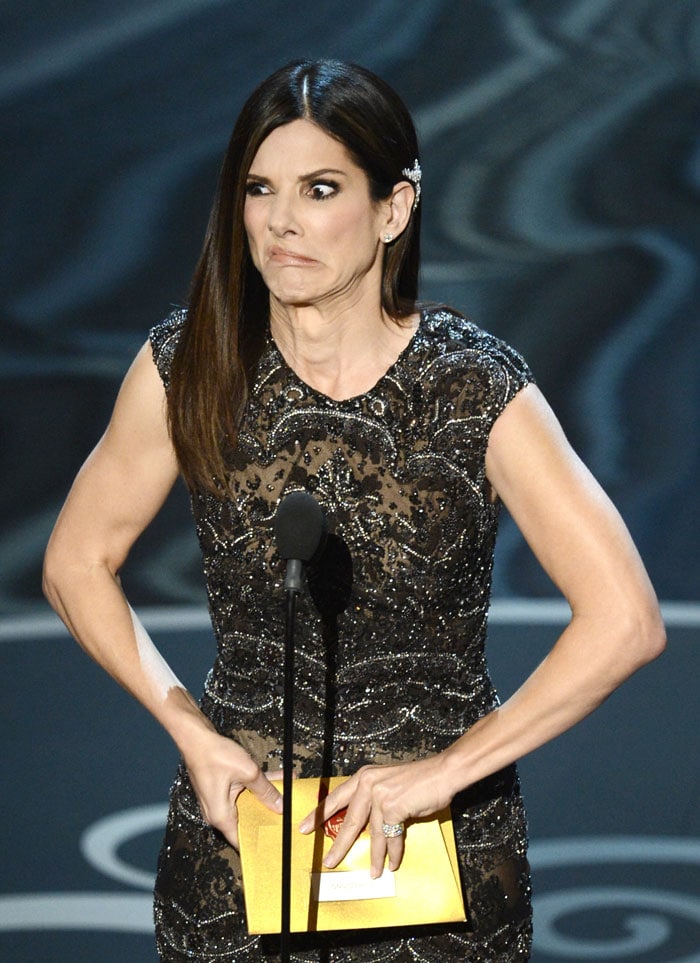 Do they use industrial glue on these things? Sandra Bullock has a bit of trouble opening the envelope while presenting the Oscar for Best Film Editing (which went to Argo). 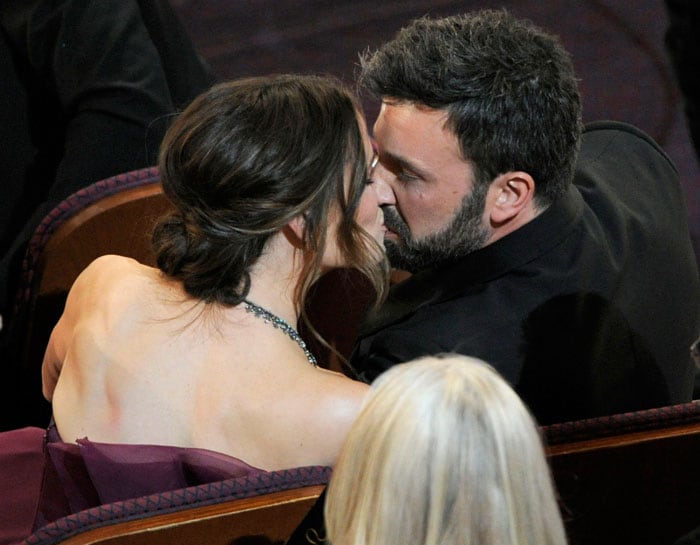 Oscar magic: Ben Affleck and Jennifer Garner seal it with a kiss. 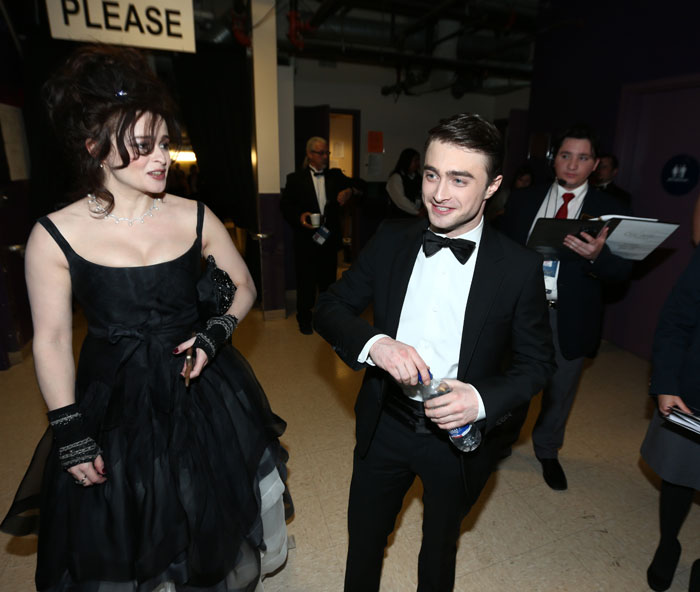 But she killed Sirius! Bellatrix Lestrange and Harry Potter hang out at the Oscars. 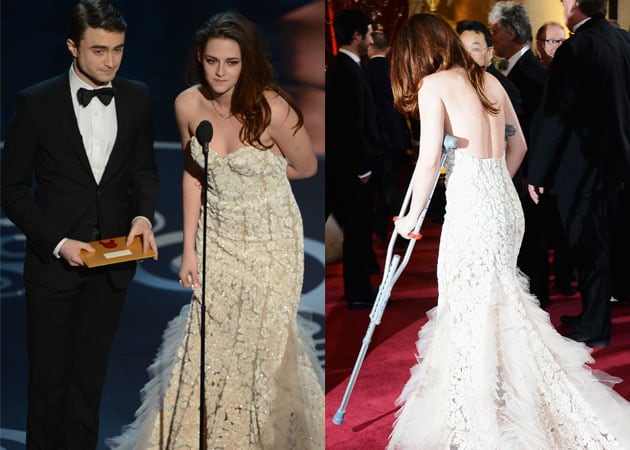 Kristen Stewart hobbled onto the red carpet using crutches after an unspecified injury but ditched them when she went on-stage to present with Daniel Radcliffe. Not only did her hair look badly in need of a hairbrush, she also slouched her way through her lines, appearing both disheveled and bored. The Twitter-verse was unforgiving. "Kristen Stewart are you ok? And by that I mean where were the hash brownies before u got hit by bus (hash)bruise (hash)limp," tweeted comedian-actor David Spade. 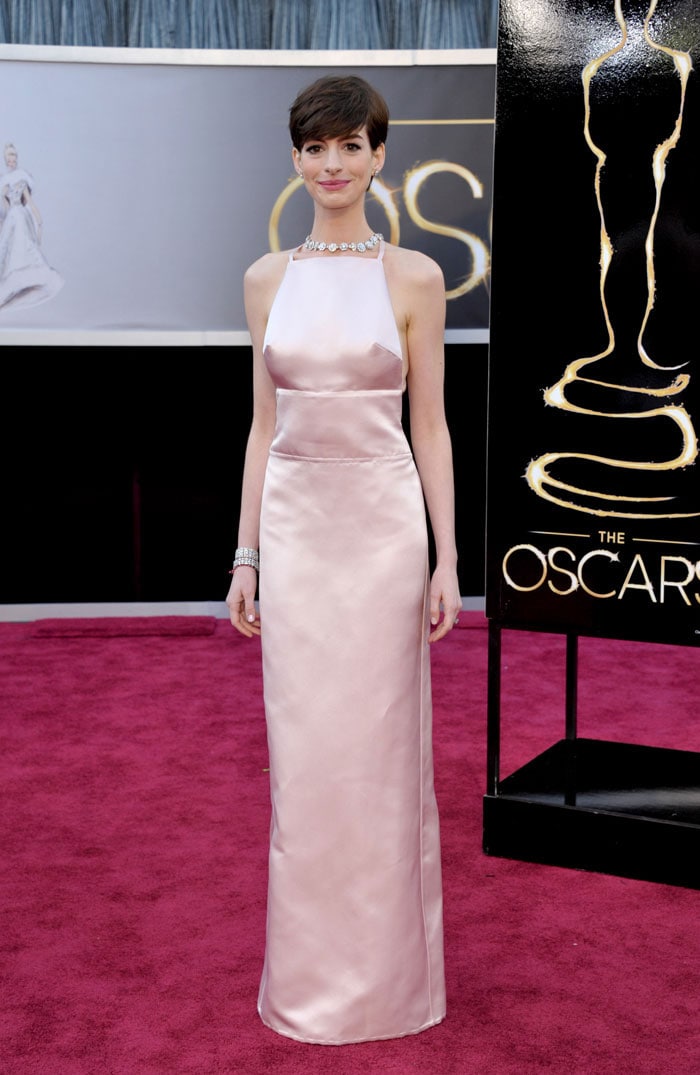 Anne Hathaway collected her first Oscar this year – Best Supporting Actress for Les Miserables. But she chose an unfortunate dress to do it in. The pink Prada landed her on more worst dressed lists than best dressed, not least because the absence of underwear was all too visible. 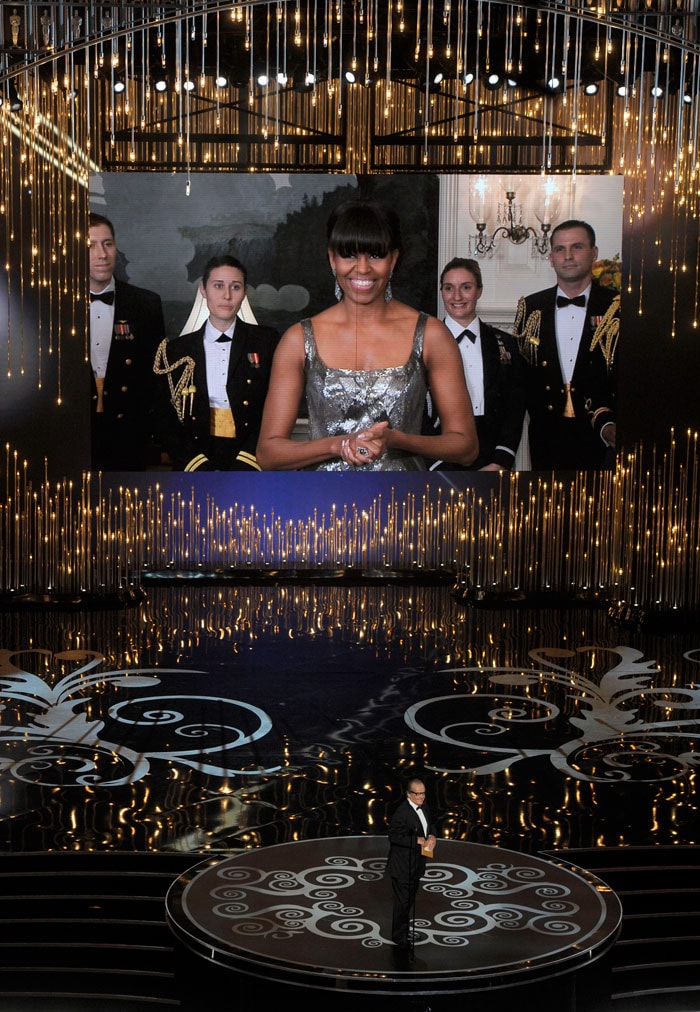 Michelle Obama made a surprise appearance via video link to announce the final and the biggest award of the Oscars - Best Picture. Beautiful in a silver beaded Naeem Khan dress, the US first lady paid tribute to this year's Best Picture nominees in her speech before announcing Ben Affleck's Argo as winner. 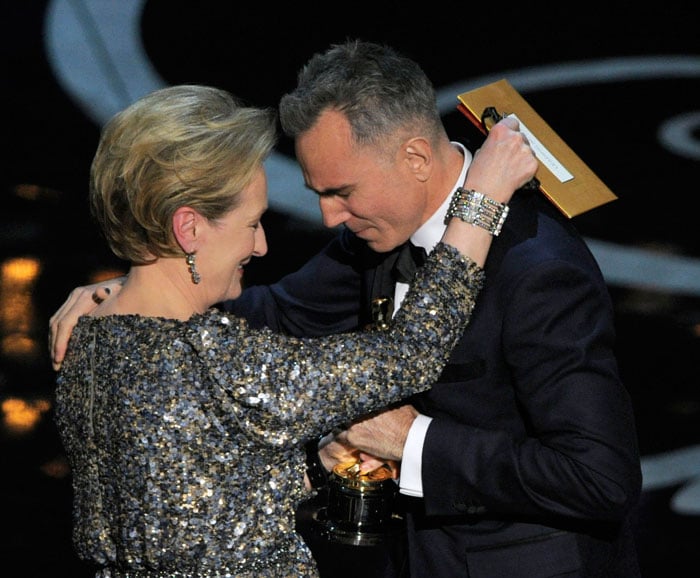 Daniel Day-Lewis made history in this year's Oscars when he bagged the Best Actor award for the third time, for playing the first US president in Lincoln. Daniel Day-Lewis now has the most Best Actor wins ever - three. After accepting the award from Meryl Streep, he said, "Three years ago, before we decided to do a straight swap, I had been committed to play Margaret Thatcher... Meryl was Steven (Spielberg)'s first choice for Lincoln. And I'd like to see that version." 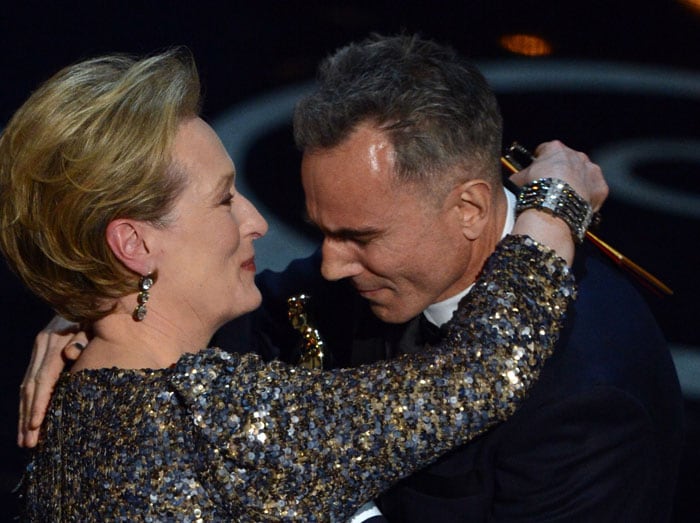 A Kodak moment between Meryl Streep, the most nominated actress, and Daniel Day-Lewis, the most awarded actor. 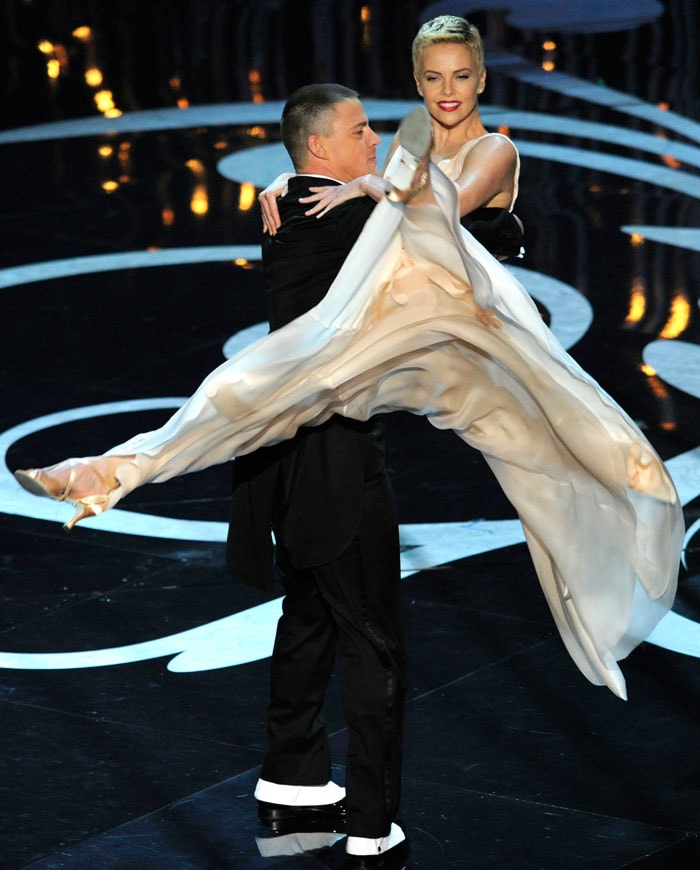 Who knew that Charlize Theron could dance like a dream? Certainly not Dustin Hoffman, who complimented his co-presenter on stage later, on her graceful ballroom number with actor Channing Tatum as host Seth MacFarlane sang The Way You Look Tonight. 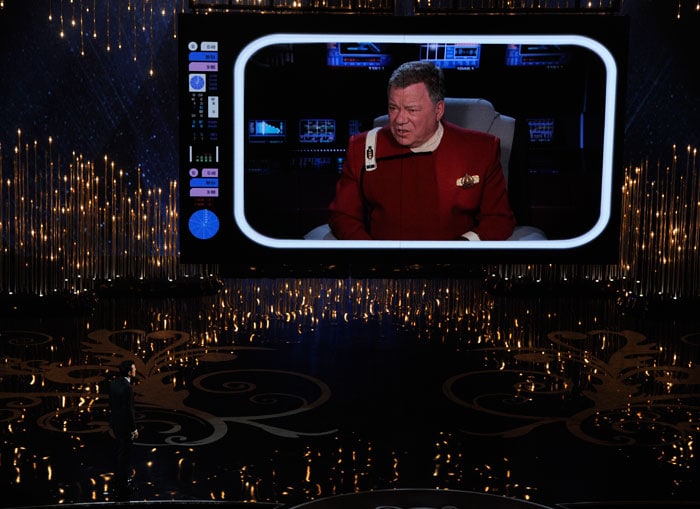 Seth MacFarlane was taken to task for being "worst Oscar host" by William Shatner in character as Captain Kirk from Star Trek. "Why can't they get Tina and Amy? Tina and Amy should host everything," grumbled Captain Kirk jokingly, referring to Golden Globes hosts Tina Fey and Amy Poehler. 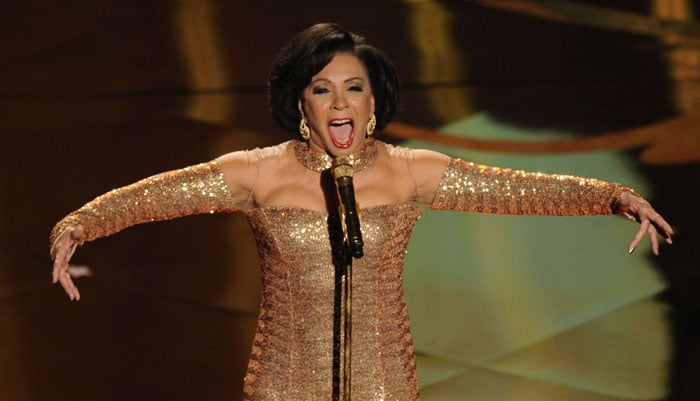 Singer Shirley Bassey paid a powerful 50th birthday tribute to James Bond by singing Goldfinger from the 1964 Bond film. Dressed in a shimmering golden dress, the singer earned a standing ovation for her performance.