The Most Beautiful Woman's best looks

Actress Gwyneth Paltrow has been named the World's Most Beautiful Woman by People magazine. And in September 2012 People magazine also honoured Gwyneth for being the World's Best-Dressed Woman. So, here's a quick recap of some her fashion highs. 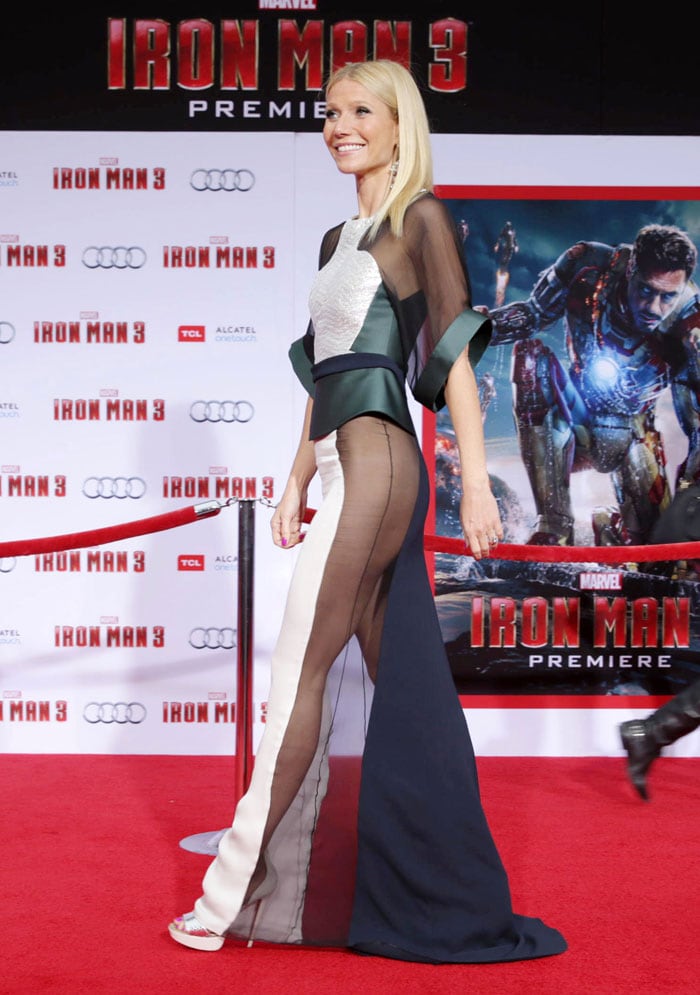 Actress Gwyneth Paltrow has been named the World's Most Beautiful Woman by People magazine. And in September 2012 People magazine also honoured Gwyneth for being the World's Best-Dressed Woman. So, here's a quick recap of some her fashion highs.

Gwyneth stunned fans and critics by wearing a revealing Antonio Berardi column dress at the Hollywood premiere of Iron Man 3 on April 24, 2013, in Caifornia. The dress revealed the entire length of the actress' toned legs and hips seen from the side. Quite a bold move, for an actress known to err on the side of modesty rather than sexiness. 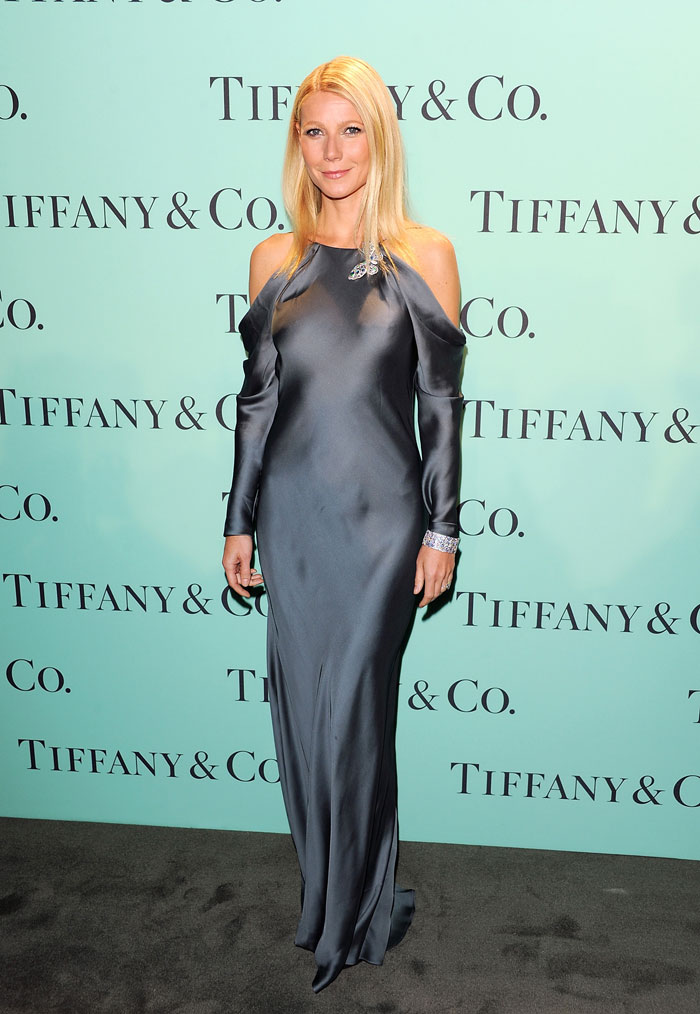 Gwyneth looked elegant at the Tiffany & Co Blue Book Ball on April 18, 2013. She wore a teal silk gown by Ralph Lauren that left her shoulders exposed and accessorized with diamonds. 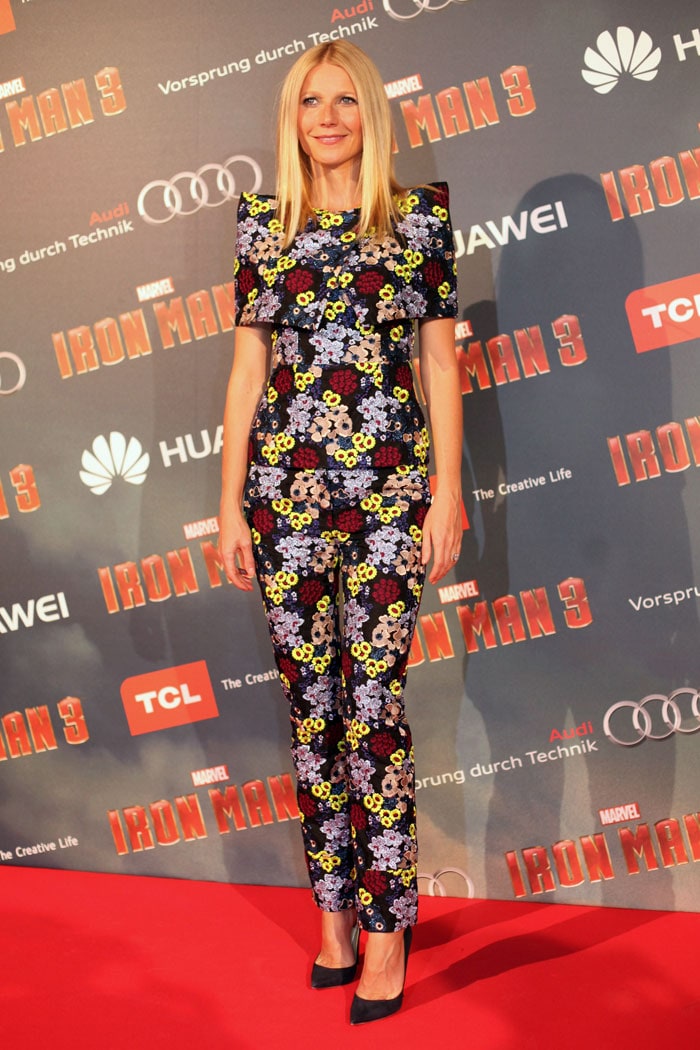 Gwyneth kept it floral at the premiere of Iron Man 3 in Paris on April 14, 2013. She wore an Erdem ensemble and Jimmy Choo pumps. 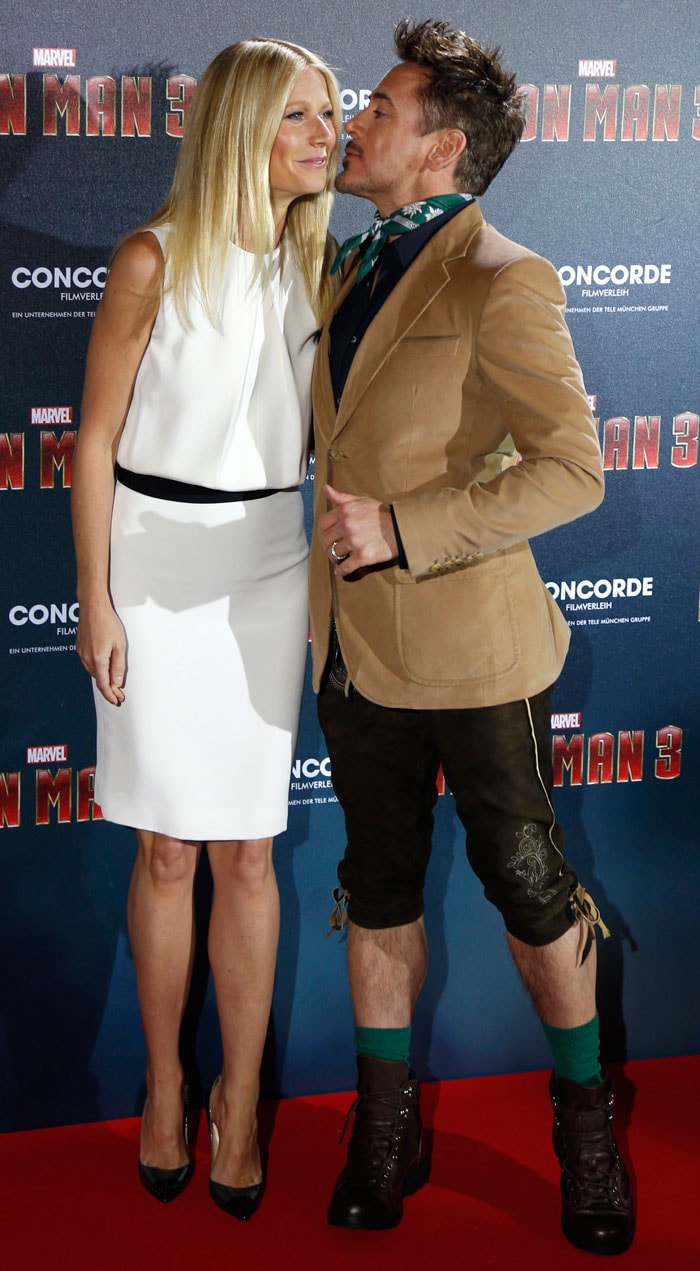 Gywneth was her usual elegant safe in a white KaufmanFranco dress while promoting Iron Man 3 with Robert Downey Jr in Munich, Germany, and looked happy enough to be photographed with her quirkily-costumed co-star on April 12, 2013. 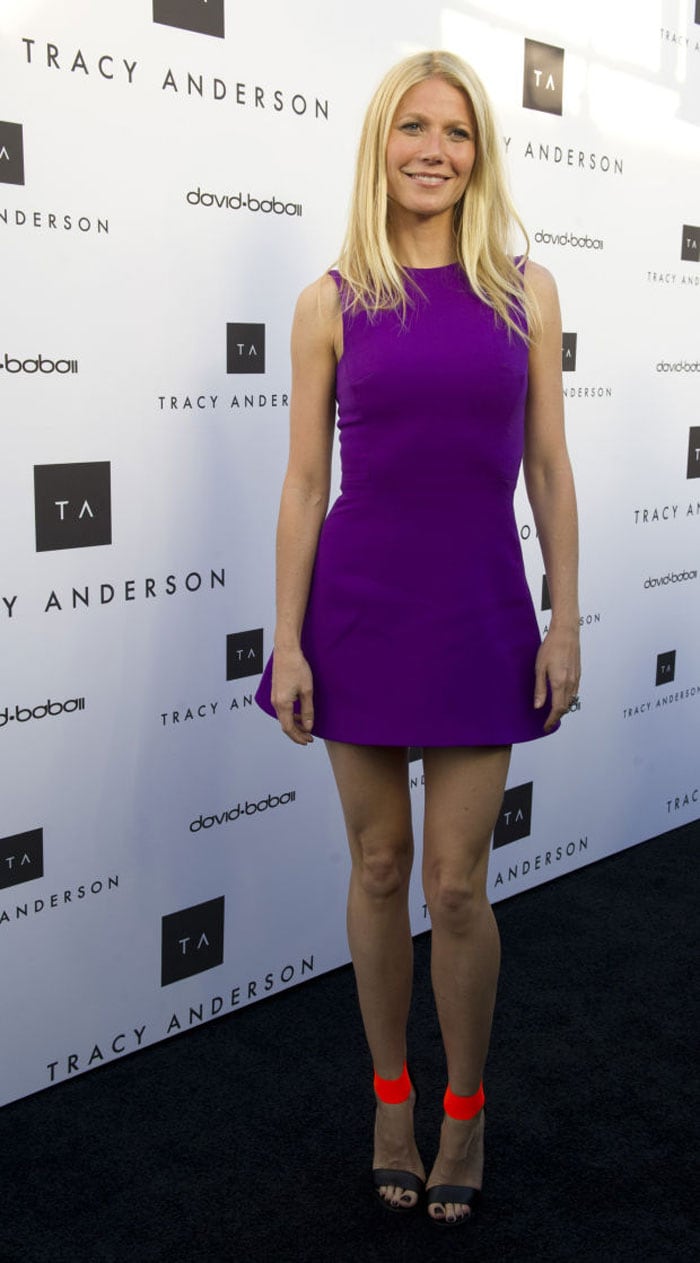 Gwyneth glammed it up at the opening of fitness guru Tracy Anderson's flagship studio in California on April 4, 2013 in a Victoria Beckham dress and Michael Kors shoes. 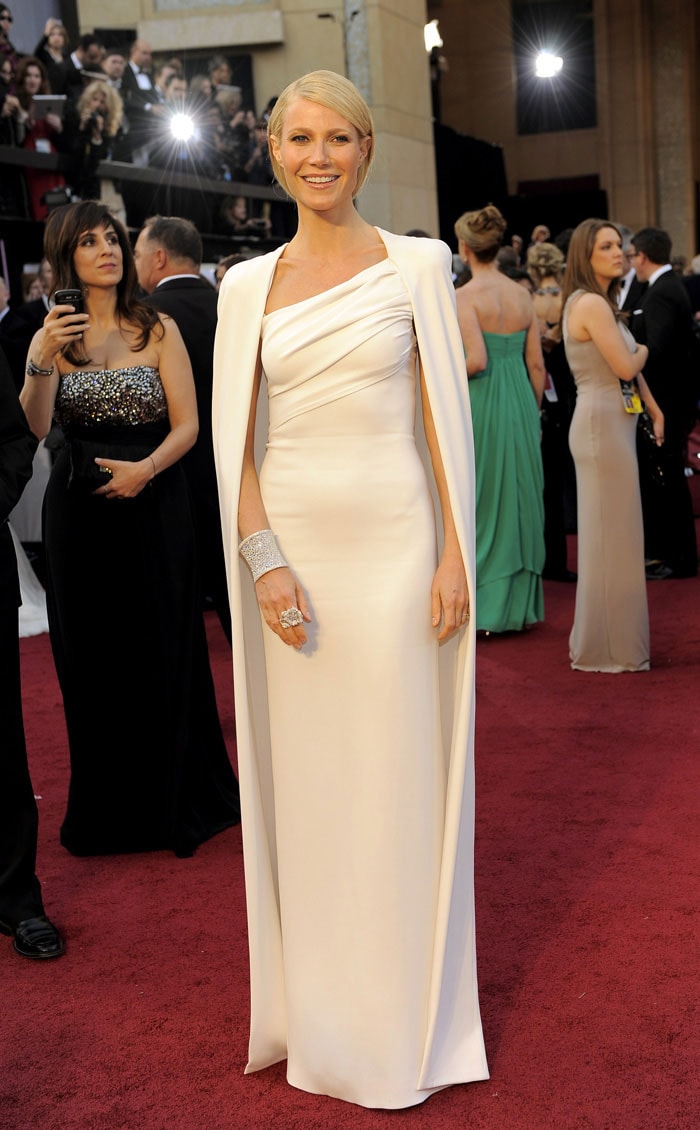 Gwyneth scored a place on the best dressed list at Oscar 2013 in a pure white Tom Ford sheath with matching cape and diamond jewellery. 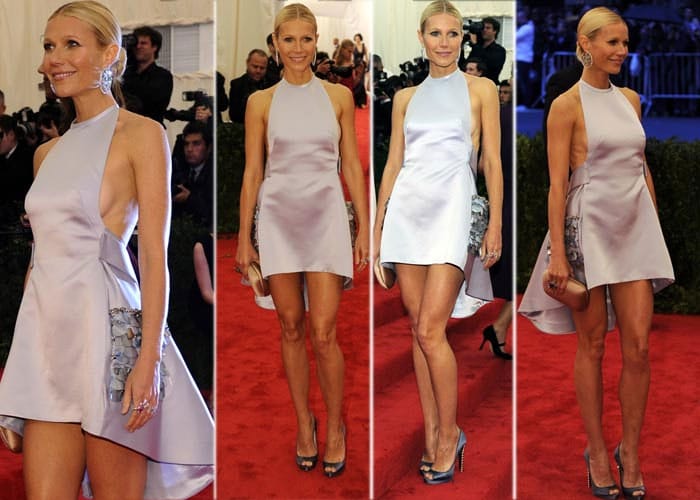 The usually demure Gwyneth took a fashion risk with a raised hemline. She wore a short steel-blue Prada dress with heavily embellished pockets to the Met Gala on May 7, 2012. 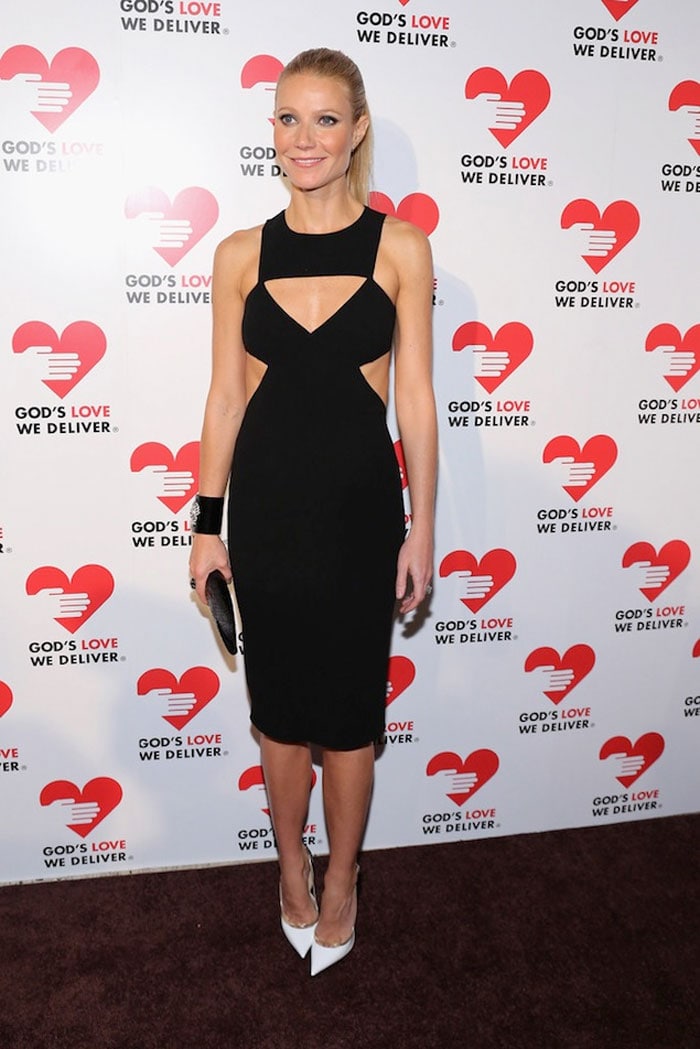 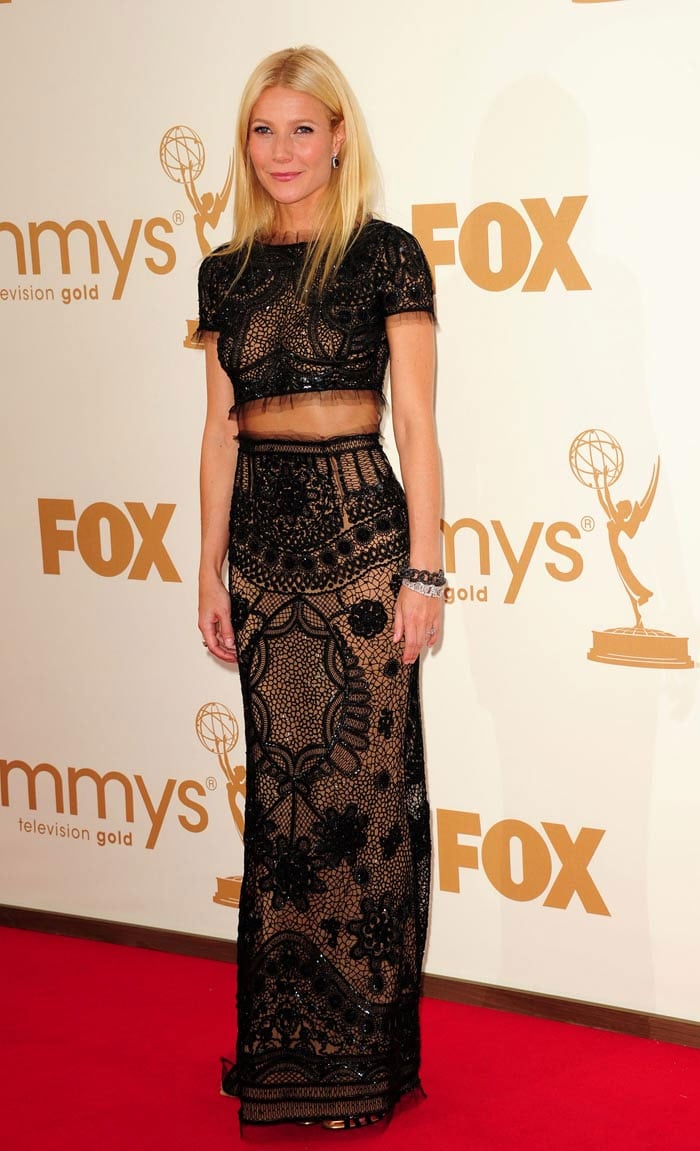 A two piece lace number? Not for the faint of fashion heart. Gwyneth looked fabulous in this Pucci number at the Emmy Awards in 2011. 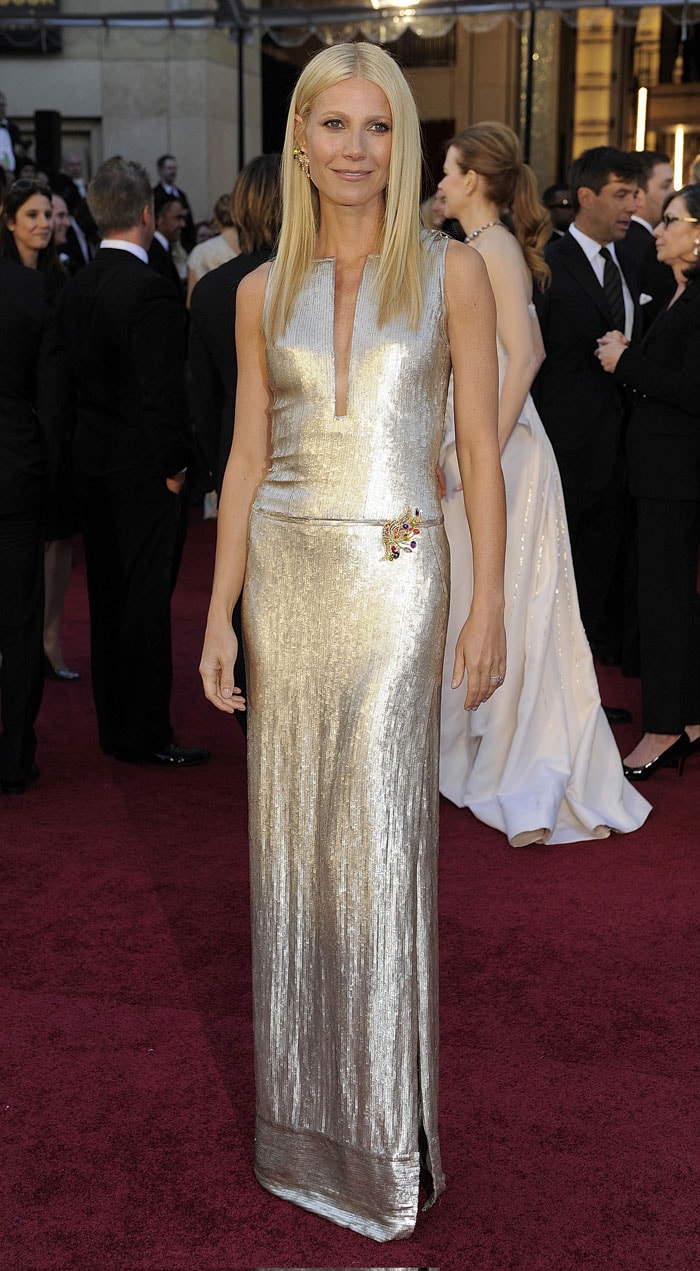 Her liquid silver Calvin Klein column at Oscar 2011 was a superhit with fashion critics. 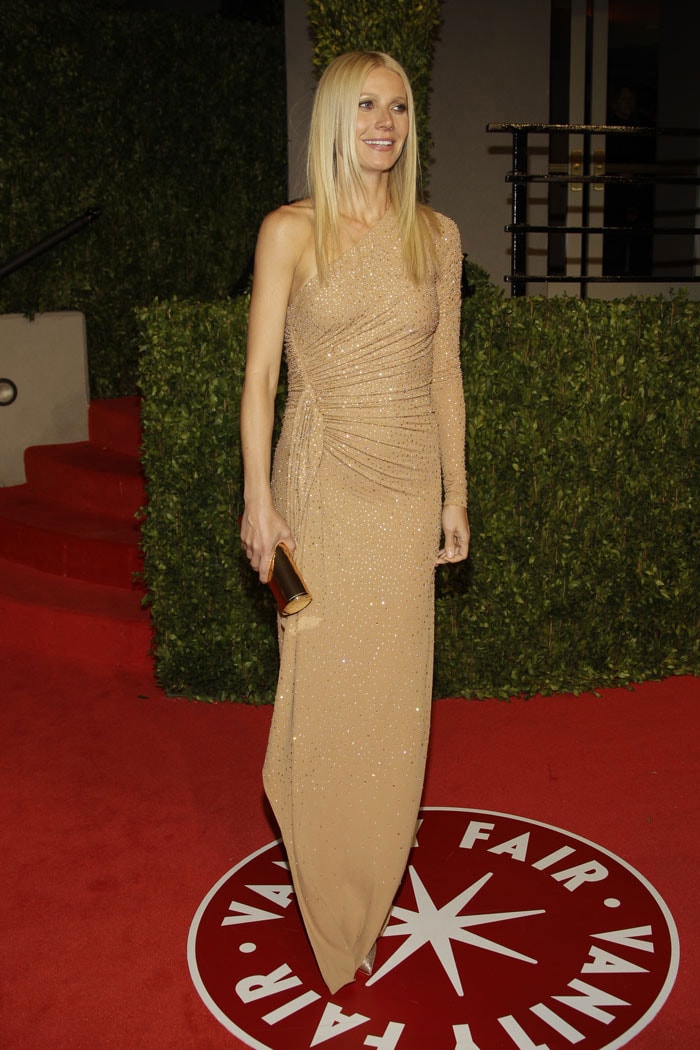 Gwyneth arrived at the Oscar 2011 after-party in style wearing a glamorous number by Michael Kors.