Sheen shocks at the Emmys

Former Two and a Half Men star Charlie Sheen celebrated his 46th birthday with two of his ex-wives, Brooke Mueller and Denise Richards. 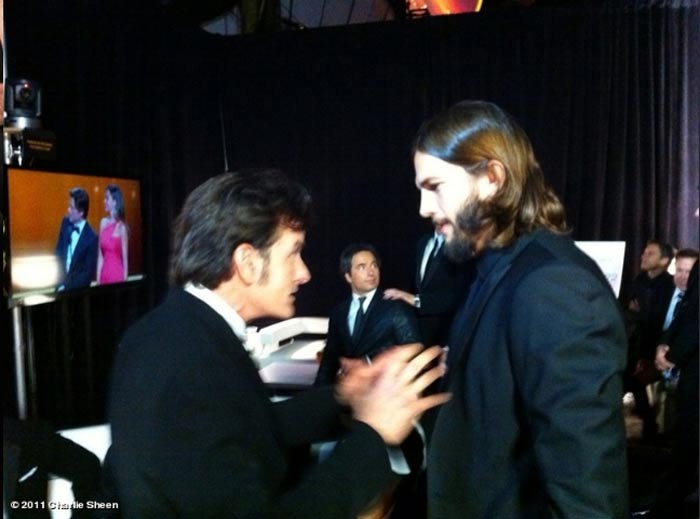 Charlie Sheen had nothing but words of support for his former Two and a Half Men colleagues at the Emmys. It began backstage, where the actor who was fired from TV's hit sitcom, tweeted a pic with Ashton Kutcher who will play an internet billionaire with a broken heart named Walden Schmidt when he joins the cast this season.

Sheen tweeted: Giving the new kid a little advice..! With @aplusk backstage at the Emmy's... On stage, before his presentation for Outstanding Lead Actor in a Comedy Series, Sheen said: "I want to take a moment to get something fof my chest and say a few words to everybody here from Two and a Half Men. From the bottom of my heart, I wish you nothing but the best for this upcoming season. We spent eight wonderful years together and I know you will continue to make great television."

Sheen posted another pic with Ashton and tweeted: "Seriously... @aplusk great talking to you! We'll all be watching! Make us proud!!" 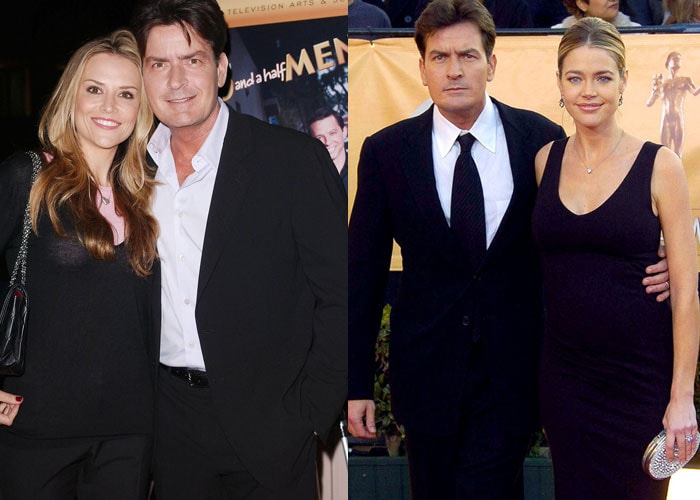 Former Two and a Half Men star Charlie Sheen celebrated his 46th birthday with two of his ex-wives, Brooke Mueller and Denise Richards.

According to reports, the troubled actor enjoyed a meal out with third spouse Mueller and their two-year-old twin sons, Bob and Max. "Celebrated B-day with the boys, Brooke & a bunch of family & friends. Huge portions, stellar staff. We will be back soon..!!!," he tweeted.

He seemed pleased to have reached 46, tweeting, "EPIC year!! Thanks to all for the kind birthday wishes. I'm gonna outlive you all."

Charlie Sheen also had another birthday meal with his second wife Denise Richards and their daughters, Sam, seven, and six-year-old Lola separately over the weekend. He later tweeted to Richards: "Love you and the girls..!!! Thanks for a great birthday dinner!! Great night! "

Coming up: The wild times of Charlie Sheen. 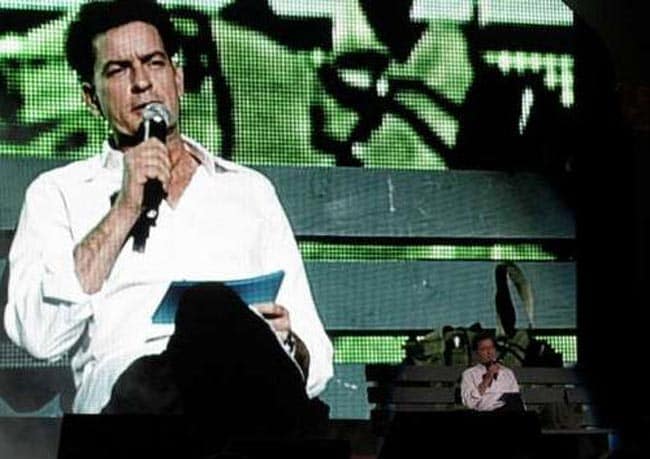 It was the same old story for Charlie Sheen, as he babbled incessantly about how amazing he is and showed off his goddesses at the Detroit show of Violent Torpedo of Truth. As the fans chanted "Refund" even before the show had come to an end, Charlie indifferently replied, "I've already got your money, dude."

Becoming increasingly agitated as he realised what a disaster the Detroit show was turning out to be, Charlie breathed a sigh of relief when his second show at Chicago got him a standing ovation at the end. 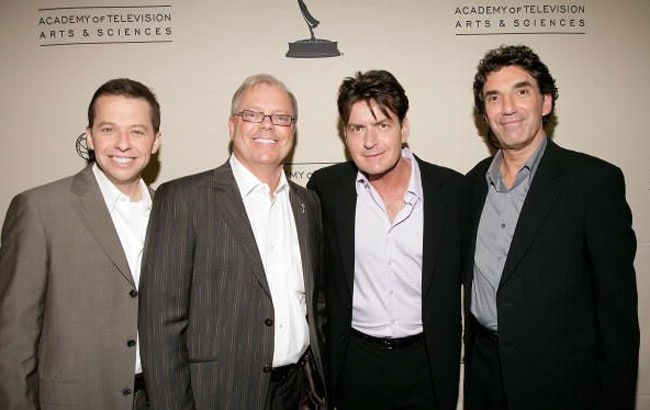 Post the verbal rampage he went on against Two And A Half Men co-creator Chuck Lorre and on-screen brother Jon Cryer, Charlie will no longer be playing 'Charlie' on the hit TV show, a character bearing uncanny resemblances to him in real life.

Charlie's history of playing clap-clap with the long arms of the law isn't helping his case either.

As the cops investigate whether the actor is in possession of weapons, a violation of the restraining order obtained last week by his ex-wife Brooke Mueller, we take a look at the tip and bottom of the iceberg that is Charlie Sheen... 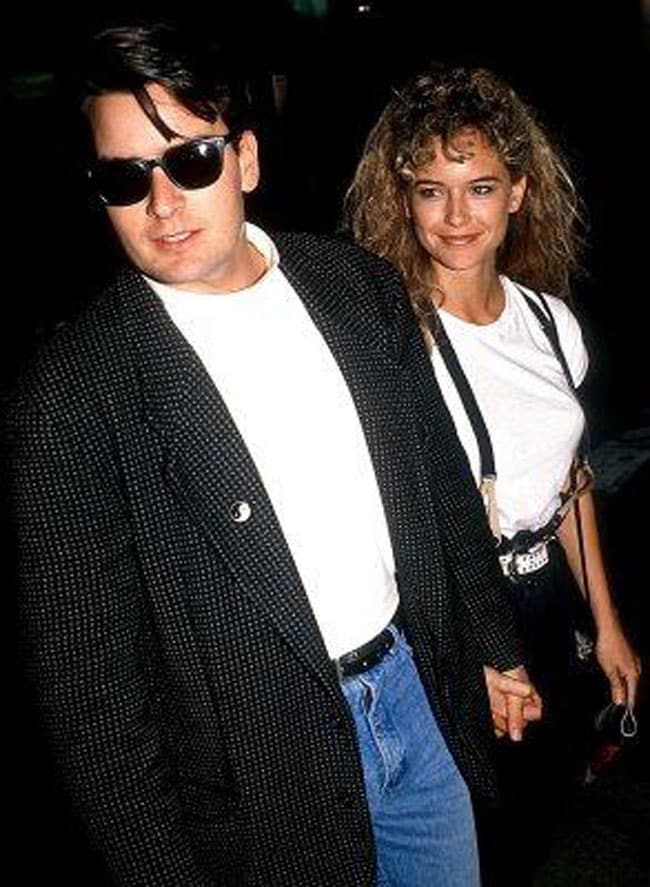 As far as we know, it all started with Kelly Preston back in 1990. The actor, for some reason, left a loaded gun in the pocket of his pants on the bathroom floor. When Preston picked up the pants, the gun discharged, and the actress was hit with shrapnel in her wrist and ankle. It was to end only one way! 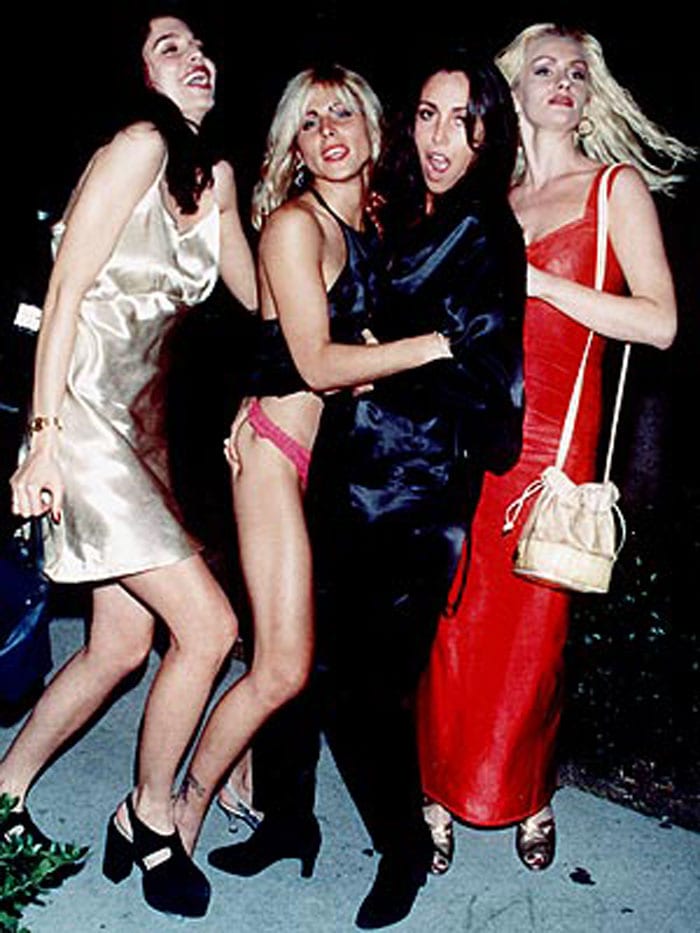 Reportedly a regular client of Heidi Fleiss, a so-called Hollywood madam, Sheen confessed to having spent $53,000 on, um, her well-heeled girls at Fleiss' 1995 tax-evasion trial. 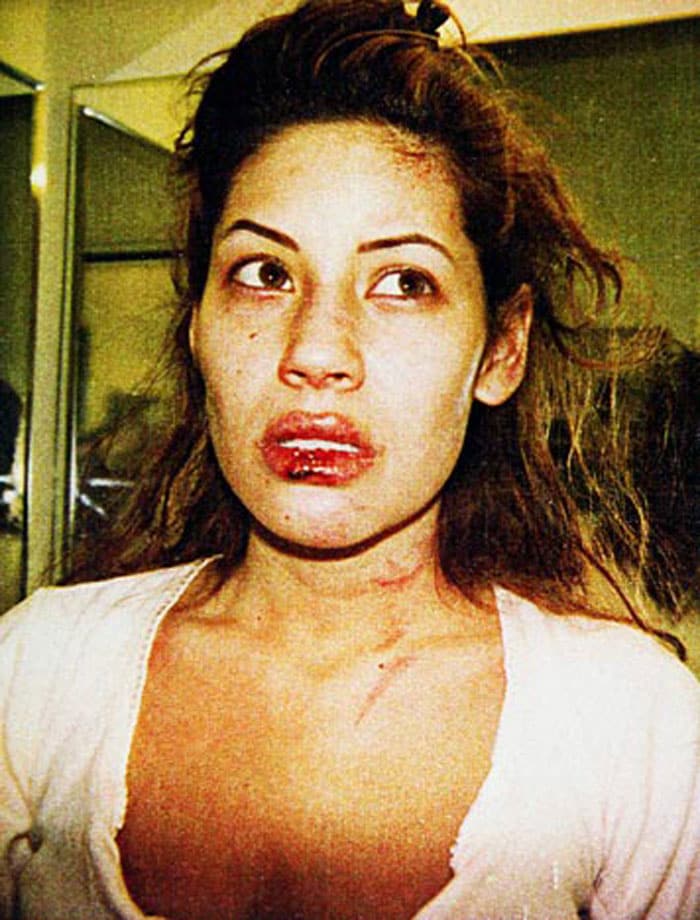 Accused of smashing then girlfriend Brittany Ashland's face into the marble floor of his Agoura Hills, California home, Charlie pleaded no contest. The actor was fined $2,800, ordered to attend counseling and perform community service. He promised the judge will never see him back in the courtroom. Right! 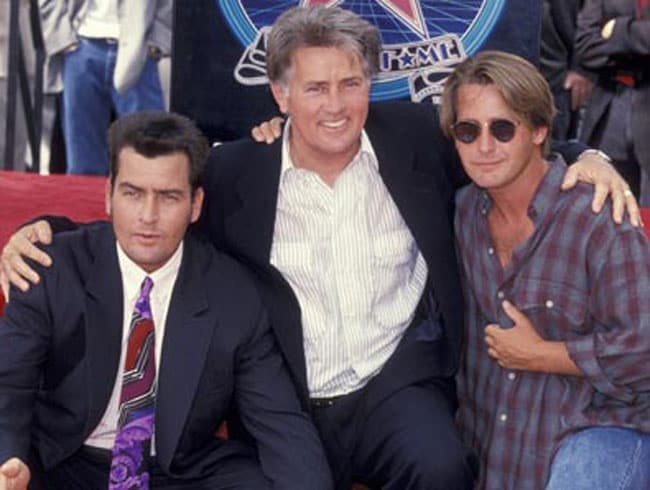 As rumours about his death circulated, Dad Martin Sheen obliged with the confirmation that Charlie had suffered a drug overdose, saying "It is my hope that he will accept recovery and become free." Following his hospital trip, the actor made a second stop at rehab too. 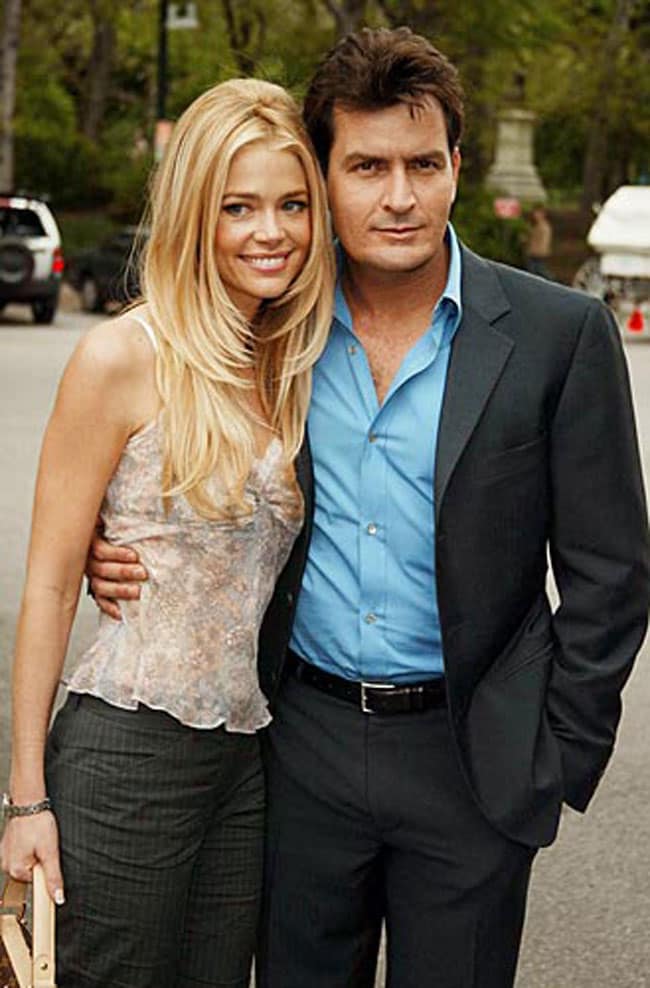 The custody divorce following a divorce with ex-wife Denise Richards got avert-your-eyes-awkward in 2007 when the actress asked the judge to protect their children from him. Reason? "...is attraction to underage women and his sexual explicitness on the Internet, including revealing his private parts." 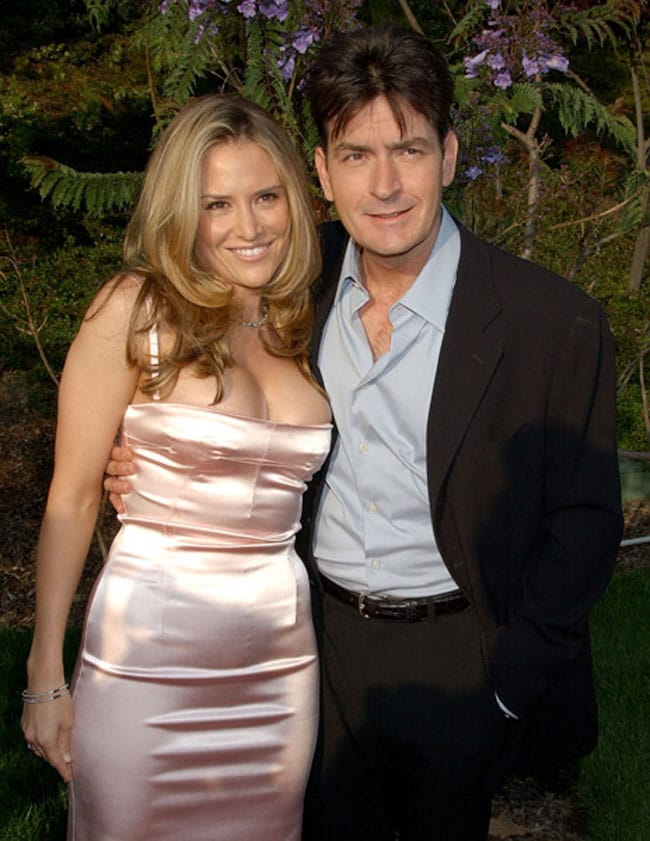 In 2009, Charlie allegedly threatened to kill ex-wife Brooke Mueller, holding a knife to her throat, following a Christmas day fight. The actor pleaded guilty to a misdemeanor assault charge after his arrest. Two days of partying can put anyone in rehab, even Charlie Sheen. The actor was rushed to Cedars-Sinai Medical Center in January after it finally became too much. The difference here is that for him it was "personalized" rehab at his home.

This calls for a new word- "prehab". 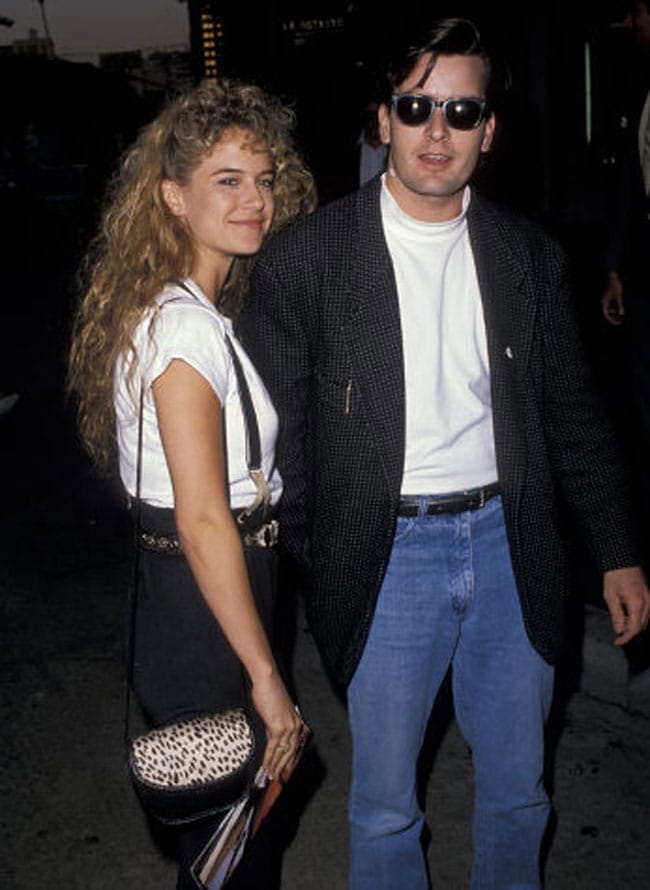 After the Kelly Preston famous shooting, Preston sold the 2.5 carat engagement ring Sheen gave her, and split the money with him.

Not an altogether bad deal for Charlie 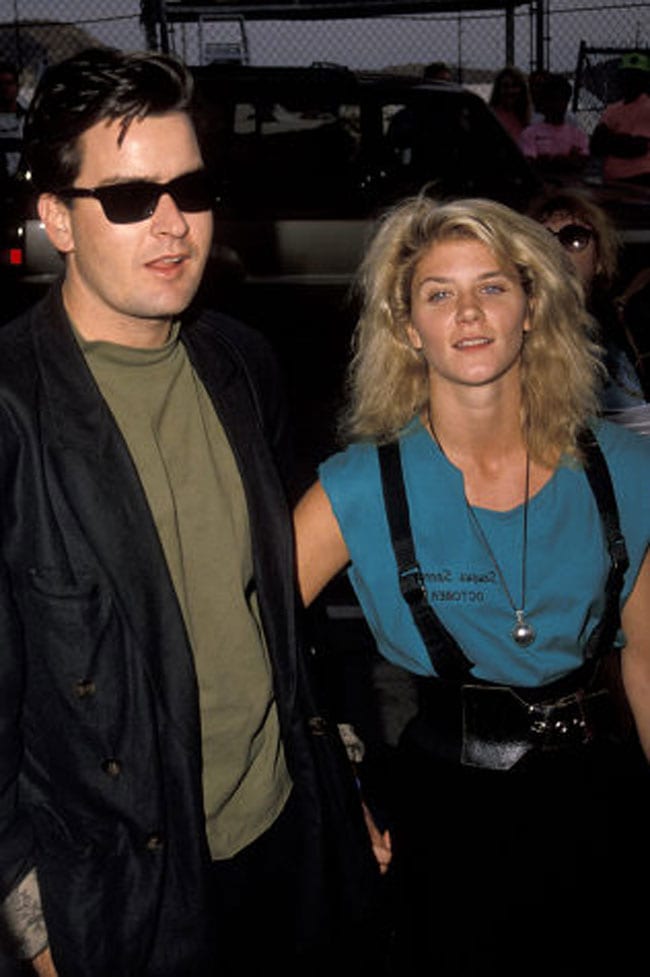 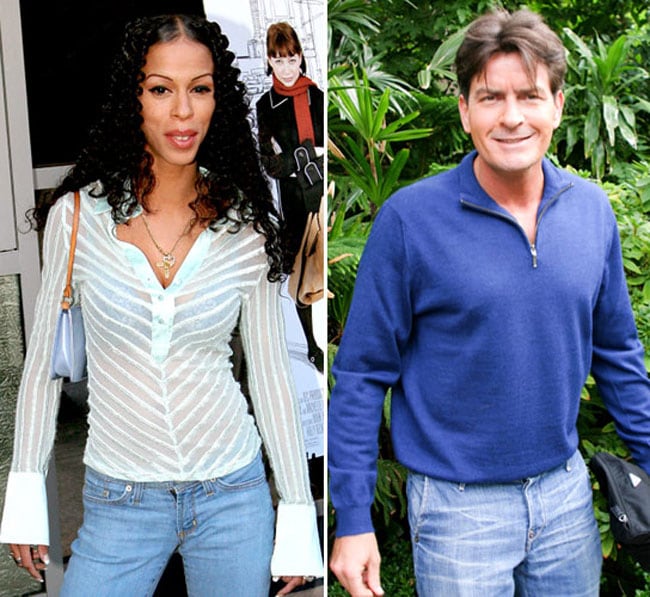 It was a 'fortunate thing' that ex-girlfriend Heather Hunter, whom Charlie dated after Ginger Lynn, did not see the supposed troubled side of the actor. She even calls him a "gentleman" in one of her interviews 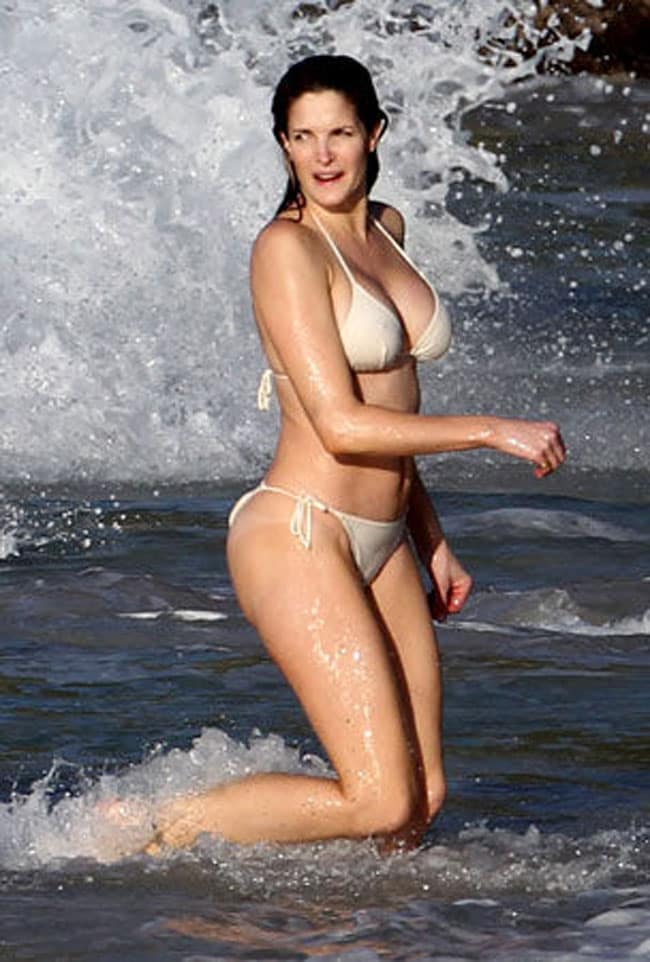 Stephanie Seymour and Charlie carried on a brief romantic relationship in 1992 while she was still seeing Guns 'N' Roses singer Axl Rose. The fling apparently led to her separation from Rose and the lawsuits that followed. 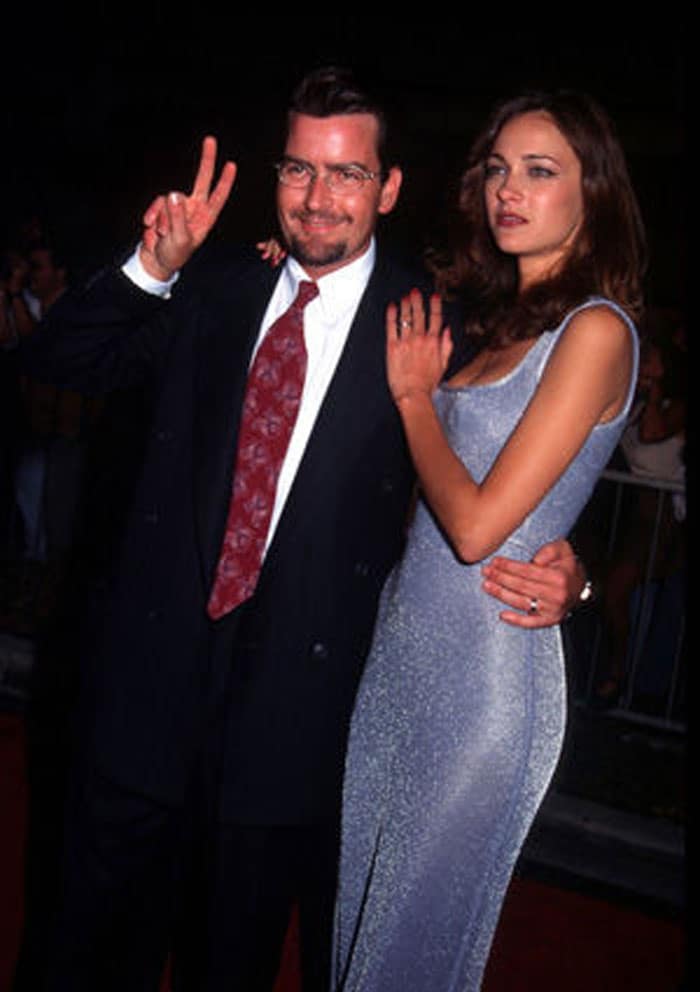 Donna Peele met Sheen in New York City while filming a cigarette commercial together. The two knew each other for six weeks before marrying on September 3, 1995 but separated a short six months later. Following this, love was not to be found. He was involved in one controversy after another, with Brittany, Denise and Brooke. And the rest, as they say, is history! 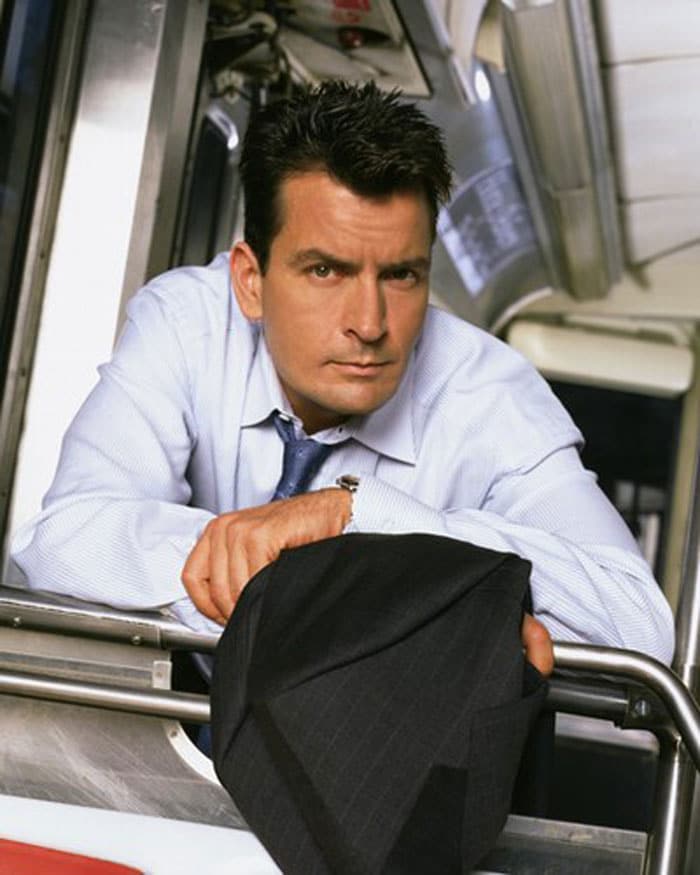 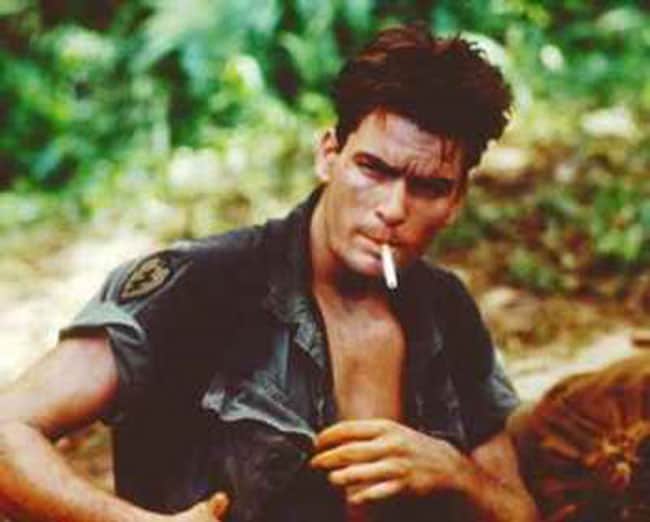 "I have defeated this earthworm with my words – imagine what I would have done with my fire breathing fists." – Sheen, on Two and a Half Men creator Chuck Lorre, in an open letter 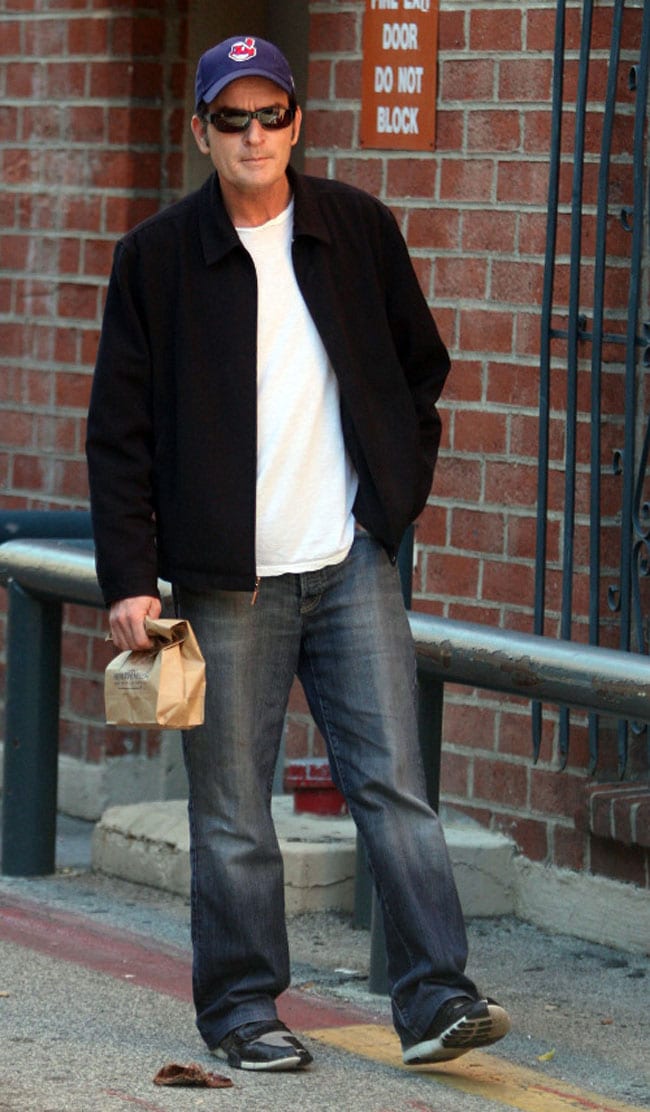 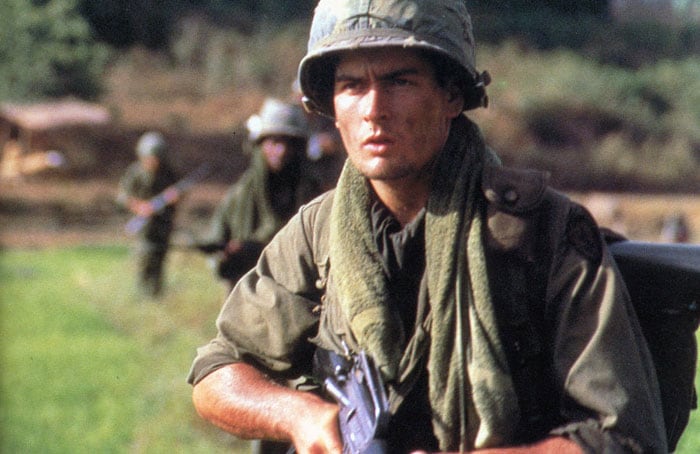 "There's a new sheriff in town. And he has an army of assassins." – Explaining why he's decided to be so outspoken 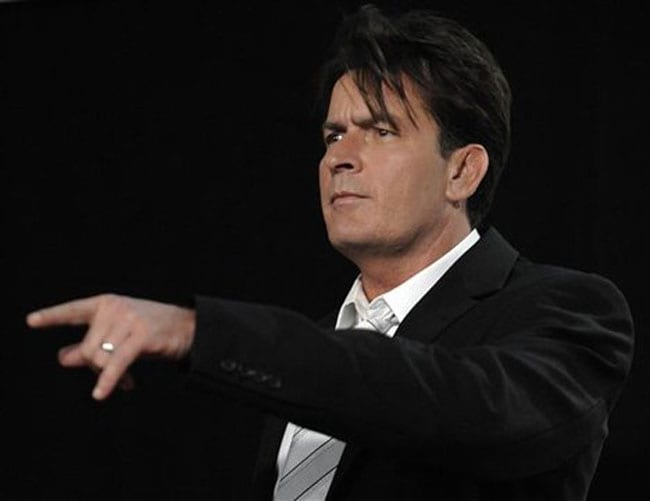 "[That way of life] was written for normal people, people who aren't special, people who don't have tiger blood and Adonis DNA." – on Today 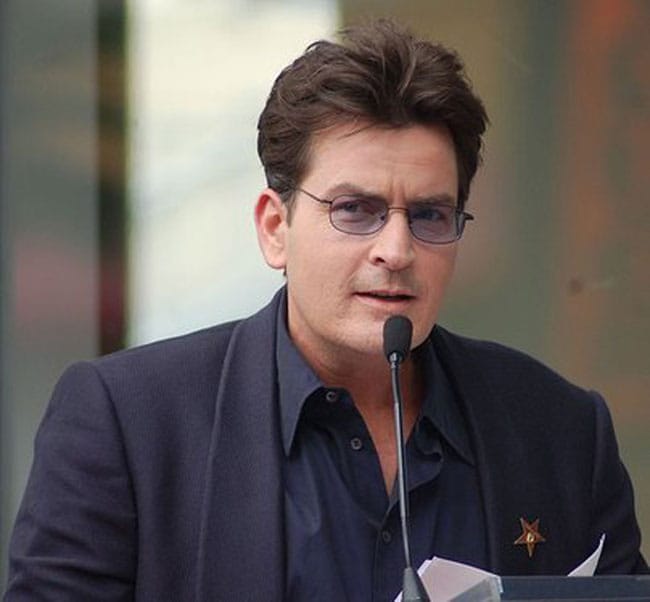 Sheen said he "wanted to watch Jaws on the ocean, in the dark and be afraid." 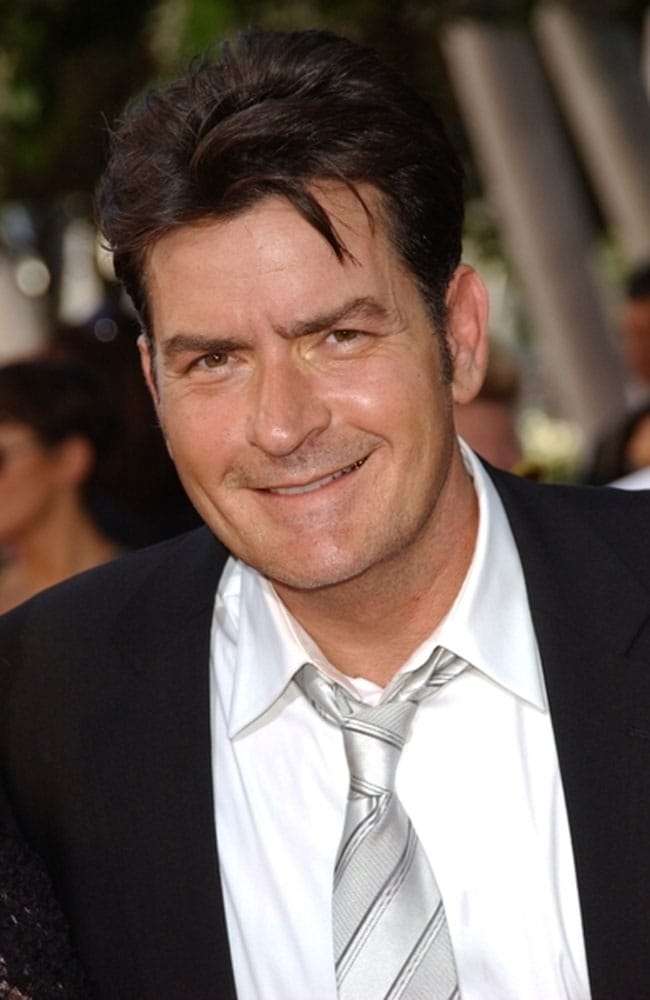 "I have a disease? Bull–t. I cured it … with my mind." – Rejecting his father Martin Sheen's statement that his son suffers from alcoholism to The Alex Jones Show 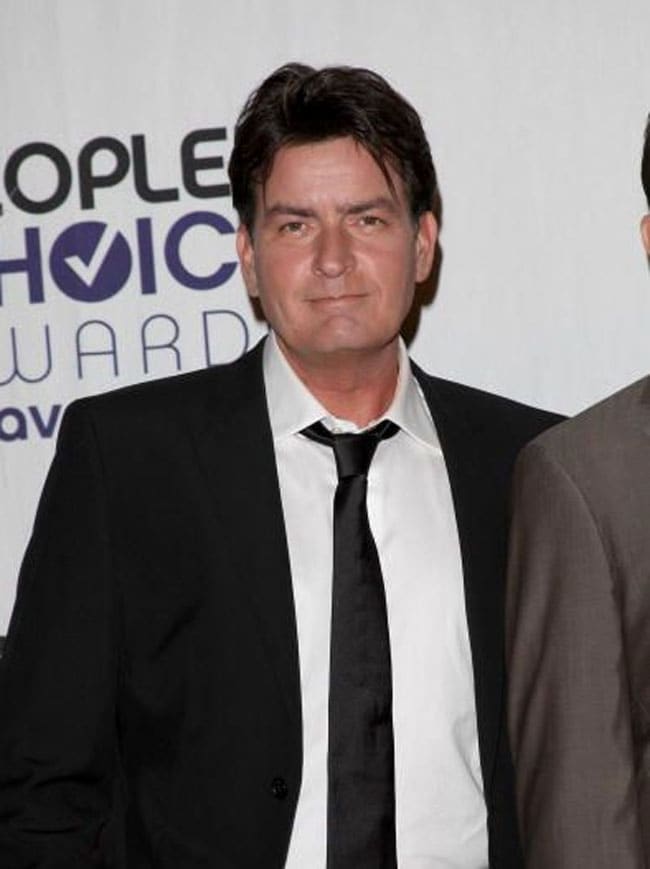 "I don't have a tuxedo that fits anymore because my chest and my biceps are too big." – Explaining why he wasn't planning on attending the Oscars, on Pat O'Brien's Loose Cannons radio show "Your face will melt off and your children will weep over your exploded body." 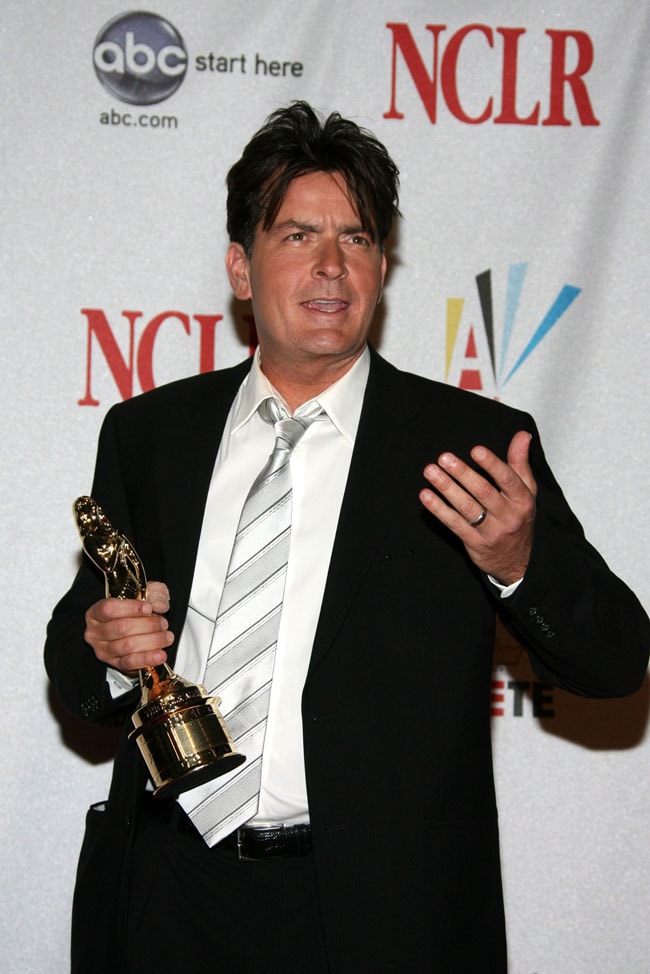 "I'm so tired of pretending like my life isn't perfect and bitchin' and just winning every second." –to The Alex Jones Show