Actress Tamannaah Bhatia is currently enjoying a successful stint in Tamil, Telugu and Hindi film industry. Films like Baahubali, Happy Days and Paiyaa have ensured she enjoys a more than comfortable stay in the entertainment field. On her 29th birthday, we take a pictorial look at her journey in the showbiz. 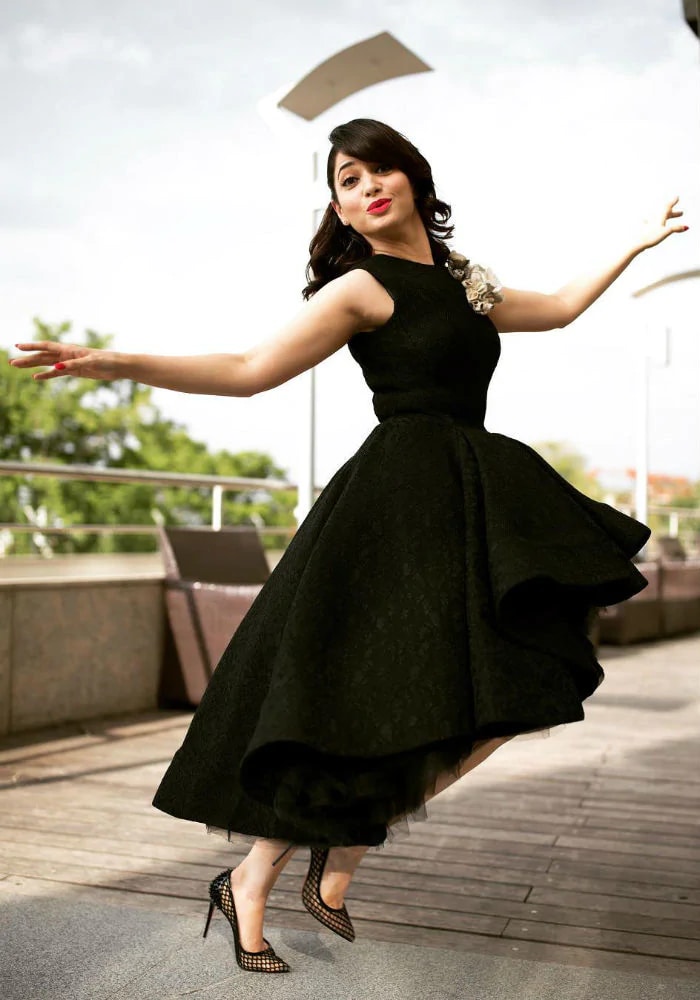 Actress Tamannaah Bhatia is currently enjoying a successful stint in Tamil, Telugu and Hindi film industry. Films like Baahubali, Happy Days and Paiyaa have ensured she enjoys a more than comfortable stay in the entertainment field. On her 27th birthday, we take a pictorial look at her journey in the showbiz. This image was posted on Instagram by Tamannaah 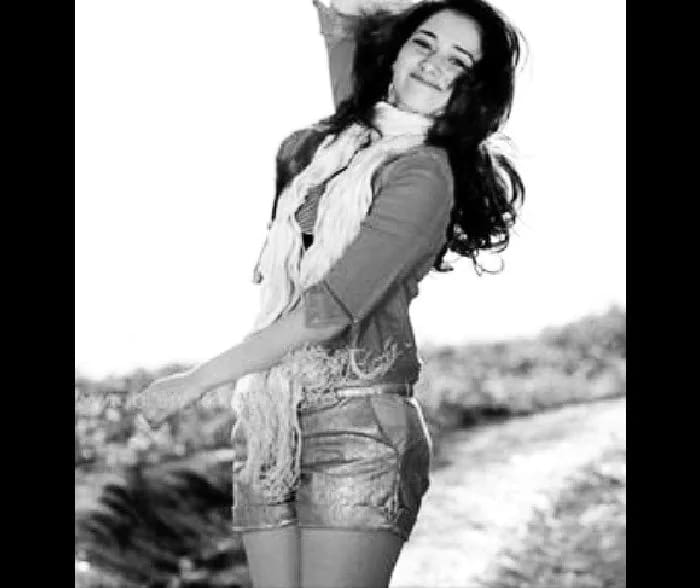 Tamannaah Bhatia was born in 1989 in Mumbai to diamond merchant Santhosh and Rajani Bhatia. She has an elder brother, Anand. She complete her education in Bengaluru and Mumbai. She was spotted at her school's annual day function and offered a lead role, which she took up, and then also became a part of Mumbai's Prithvi Theatre for a year.

Tamannaah made her debut in the film industry at age 13. She bagged a role in Jyothi Krishna's Enakku 20 Unakku 18. Two years later, she played the female lead in Chand Sa Roshan Chehra which was a commercial success at the box office. The same year, she made her debut in Telugu cinema with Sri. 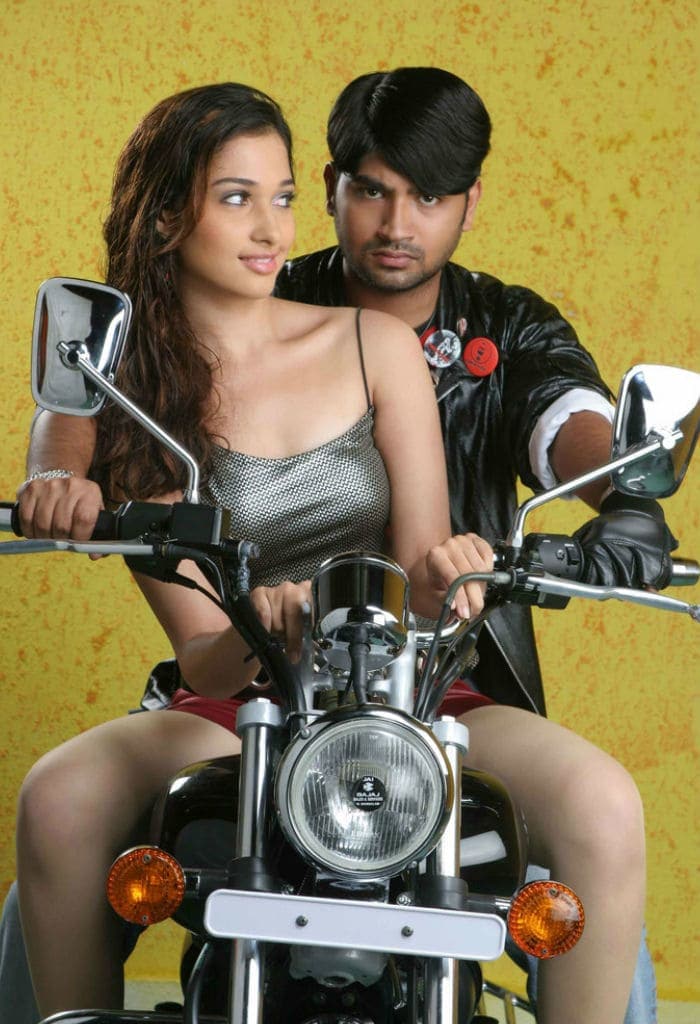 In 2006, she featured in Tamil film Kedi, which was a critical and commercial success. But she was not so lucky with Shakti Chidambaram's Viyabari which received negative reviews and tanked at the box office. Next came Sekhar Kammula's Happy Days and Balaji Sakthivel's Kalloori, both of which won critical acclaim. The commercial success both films ensured her firm footing in Telugu and Tamil film industry. 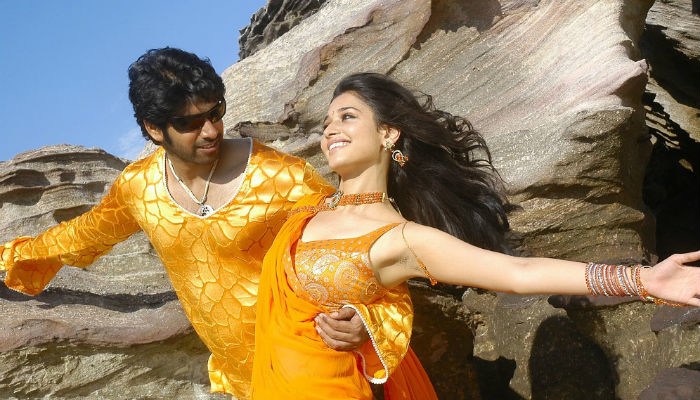 Her first release of 2008 was the Telugu film Kalidasu opposite Sushanth, grandson of actor Akkineni Nageswara Rao. The film was directed by newcomer G. Ravicharan Reddy. It didn't do her any good but neither did the film harm Tamannaah's image. 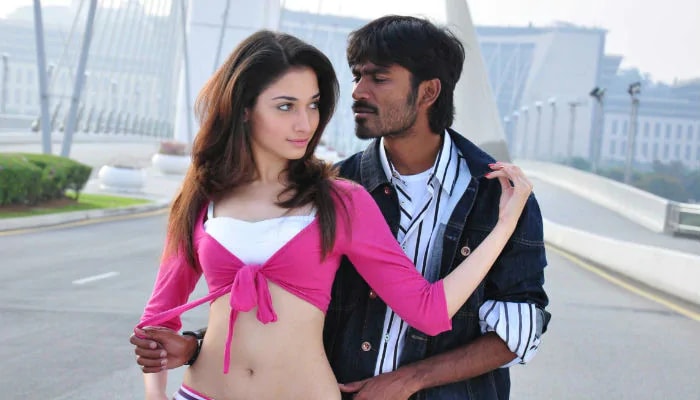 In 2009 Tamannaah featured in Tamil film Padikkadavan with superstar Dhanush. The Suraj-directed film got moderate reviews but it was a commercial success. Her next release was the Telugu film Konchem Ishtam Konchem Kashtam directed by Kishore Kumar Pardasany and co-starring Siddharth. This time it was the opposite. Despite good reviews, the film did average business. Her K. V. Anand-directed Ayan opposite Suriya, was the only major commercially successful Tamil film of the year. Tamannaah later appeared in the remake of Jab We Met. Directed by R. Kannan and titled Kanden Kadhalai opened to decent feedback from critics and Tamannaah's performance won praise from them. Tamannaah's first release of 2010 was N. Linguswamy's Paiyaa with Karthi was a Tamil road movie. The film opened to positive reviews from critics and was a commercial success. Her other two releases of 2010 were S. P. Rajkumar's Sura, co-starring Vijay, and M. Raja's Thillalangadi ( a remake of Kick) tanked at the box office. Tamannaah's first release of 2011 was Siruthai with Karthi the official remake of S S Rajamouli's Vikramarkudu did not impress the critics. 100% Love with co-starring Naga Chaitanya marked her return to Telugu cinema after a gap of two years. It was one of the biggest commercial successful Telugu films of 2011. Next was V. V. Vinayak's Badrinath, co-starring Allu Arjun, which again did not impress. Tamannaah teamed with Dhanush again for Hari's Venghai and also featured in Oosaravelli but failed to create magic. Tamannaah starred in four Telugu films in 2012, the first one being Racha, a hit; Endukante... Premanta! , a flop; Rebel, with Prabhas, a commercial failure and Cameraman Gangatho Rambabu, co-starring Pawan Kalyan, which saved the year for her by becoming one of the biggest commercial successful Telugu films of 2012. 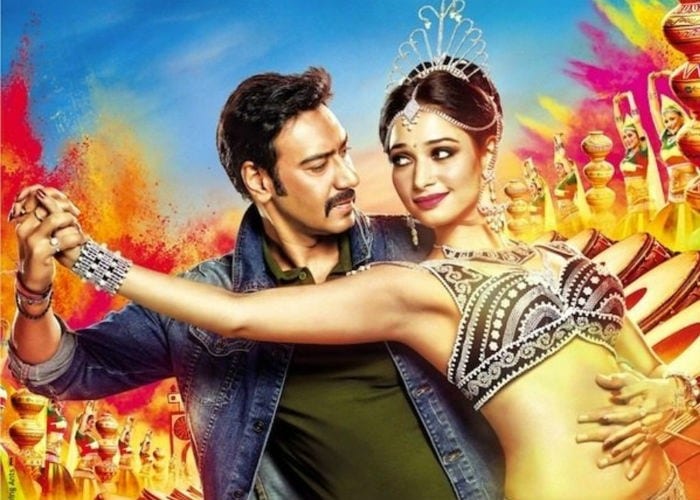 She returned to Tamil cinema in 2014 after a sabbatical of three years with Siva's Veeram, co-starring Ajith Kumar. It became one of the highest grossing Tamil films of 2014.

In Bollywood, she again collaborated with Sajid Khan for Humshakals - again, a disaster.

Her next Bollywood film was Entertainment directed by Sajid-Farhad and co-starring Akshay Kumar. It was a semi-hit. Her last release of 2014 was Srinu Vaitla's Aagadu with Mahesh Babu which was a box office turkey. 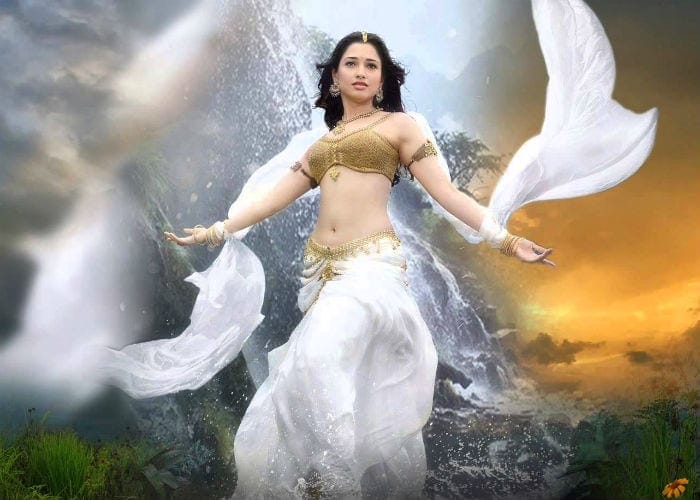 In July 2015, the first part of S S Rajamouli's two-part multilingual fictional epic film Baahubali released. She featured as Avanthika a warrior who a recruit in a group of tribal on a mission to save the queen and restore the rule of Baahubali's favoured people and end Bhallava Deva's tyranny. The film also featured Prabhas, Rana Daggubati and Anushka Shetty.

Part two of the film titled Baahubali: The Conclusion will released in 2017, which was once again a massive hit at the box office. 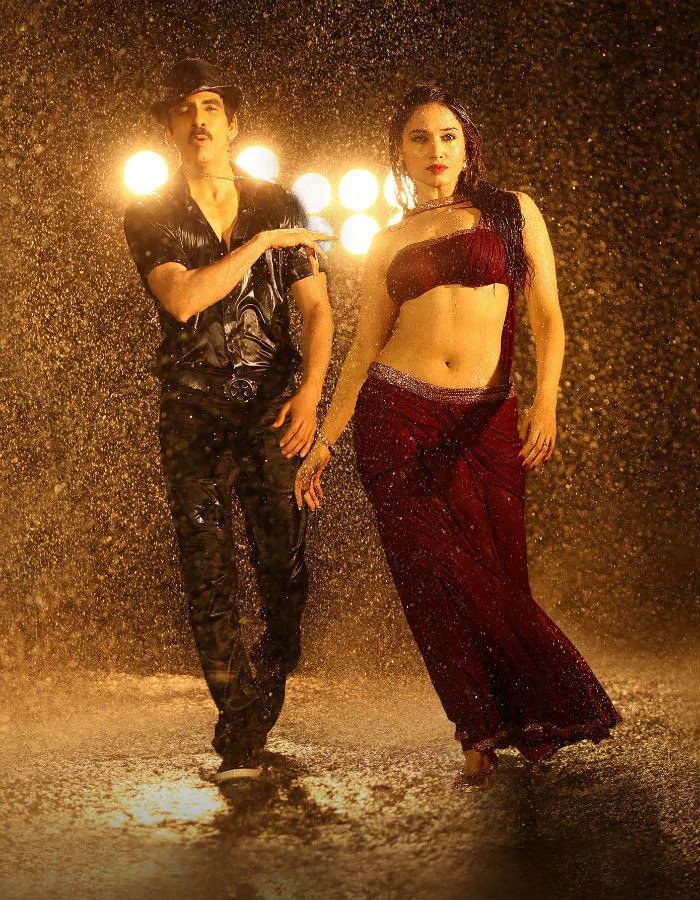 After Baahubali, she was seen in M Rajesh's Vasuvum Saravananum Onna Padichavanga, which tanked. Her last release of 2015 was Sampath Nandi's Bengal Tiger, co-starring Ravi Teja, which saved the day for her. 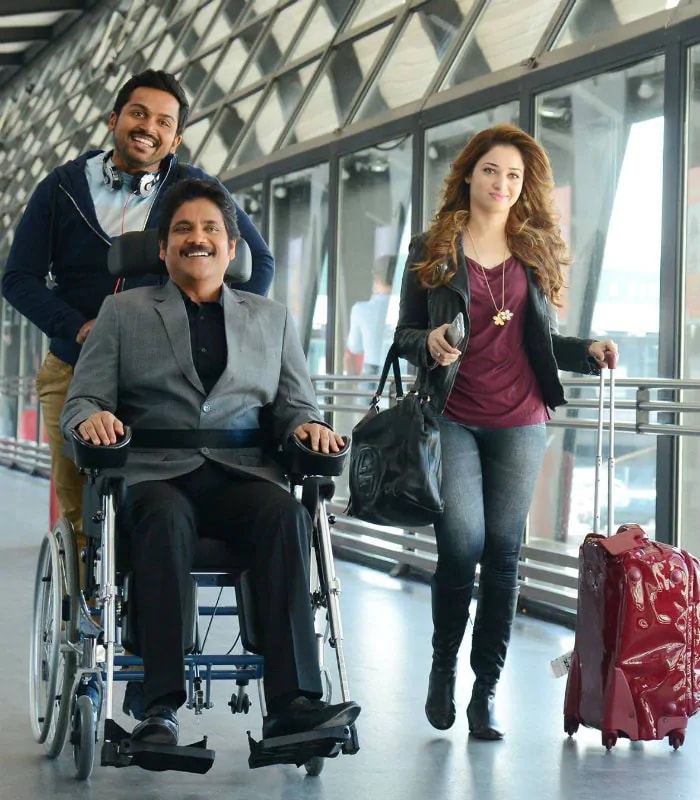 Her next release was Vamsi's Oopiri which is a remake of The Intouchables, co-starring Akkineni Nagarjuna and Karthi, being filmed in Telugu and Tamil simultaneously. The film got positive reviews. In 2016, she completed filming a Tamil film Kaththi Sandai signed the remake of Kangana Ranaut's critically acclaimed Queen in Tamil under the direction of Revathi. 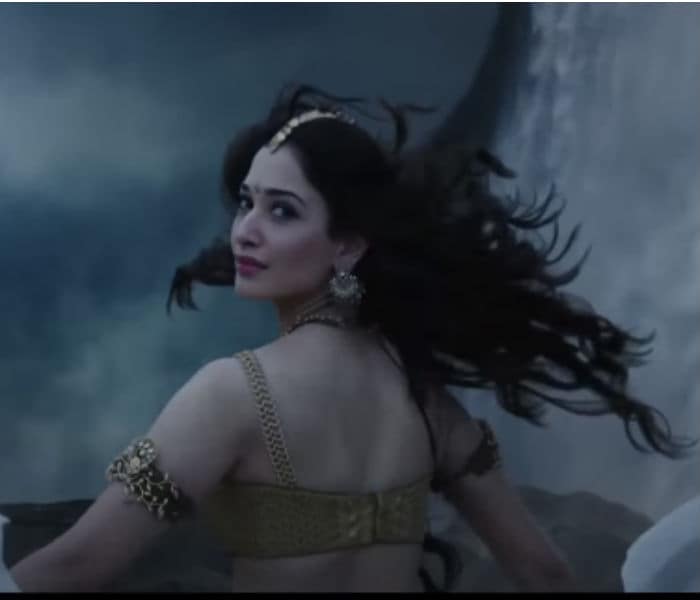 Tamannaah kicked off 2018 with blockbuster film Baahubali: The Conclusion. She also faertured in Jai Lava Kusa and Anbanavan Asaradhavan Adangadhavan, which released in the same year. 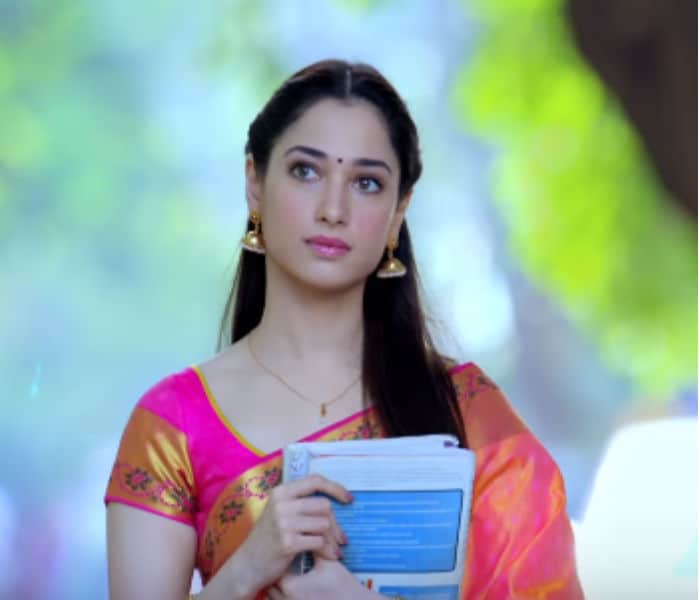 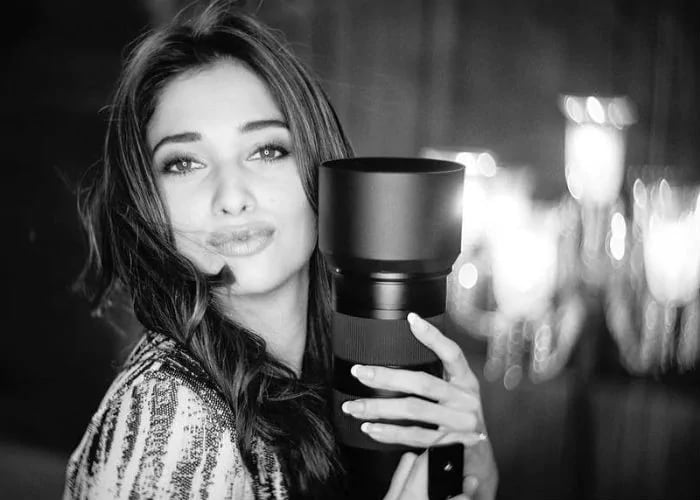