Censored! This is What Rihanna Considers a 'Dress'

Rihanna wore this ‘dress', Rated R, to the CFDA fashion awards in New York on June 2. The Big Apple is talking about little else. 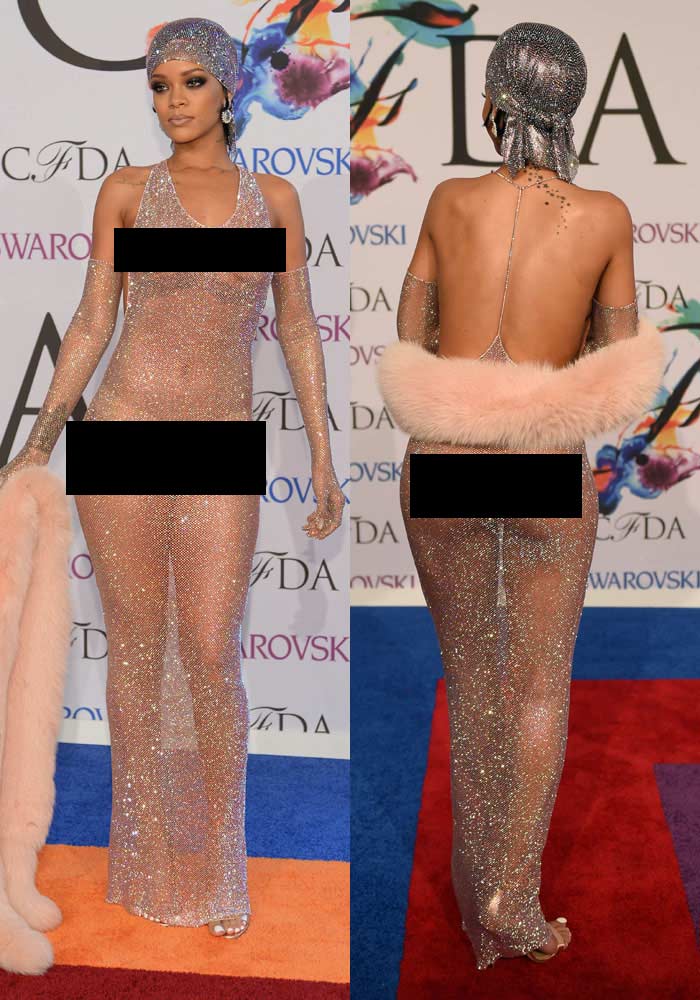 Rihanna wore this dress, Rated R, to the CFDA fashion awards in New York on June 2. The Big Apple is talking about little else.

RiRi, who was collecting the Fashion Icon award, showed up in completely sheer and shimmering Adam Selman with just a fur boa to cover the bits she didn't want people to see (there didn't seem to be any).

Some folks think this was her revenge dress, aimed at rapper Drake who she just broke up with. Others think she wore it to show Instagram, who suspended her account over racy pictures, who was boss.

We just think she wore the dress just because she's possibly the only person in the whole world who could, would and did.

Coming Up: What Did we Just See? Mariah, Please Don't Wear That Again 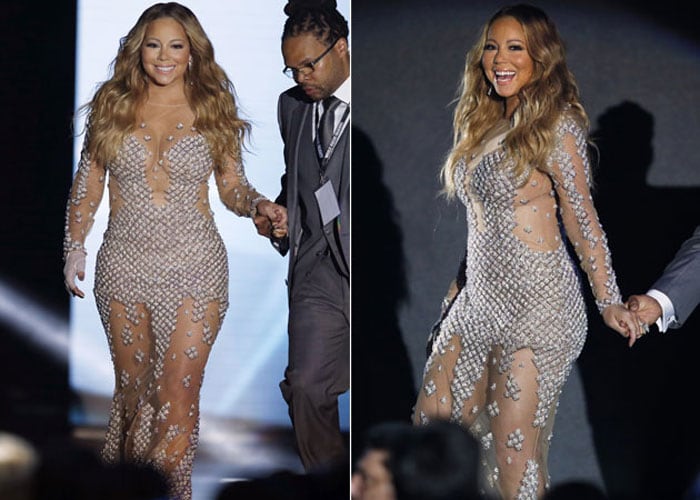 Does this sheer diamante-studded concoction even qualify as a dress? Singer Mariah Carey wore barely-there Zuhair Murad to the World Music Awards in Monaco on May 27. Her hips don't lie - that dress would look good only on Jennifer Lopez.

Mariah's smile says she thought she was smoking in the dress. There's no good way to say this, Mariah - you didn't.

Coming up: Miley just won't 'back' down All eyes were on American singer and actress Miley Cyrus at the MTV European Music Awards at the Ziggo dome in Amsterdam on Sunday, November 10 and the former Disney princess didn't disappoint. Miley pushed her boundaries further in a very revealing mini dress. The 20-year-old wore a plunging backless halter dress that was really little more than a top and chequered thigh-high boots. The ‘dress' was emblazoned with images of late hip-hop stars Tupac Shakur and The Notorious B.I.G – both of who were victims of shootings – and the words ‘Please Stop Violence.' In August this year, Miley shocked watchers with a very raunchy performance at the MTV Video Music Awards.

Coming up: A dress that says 'why wear anything?' 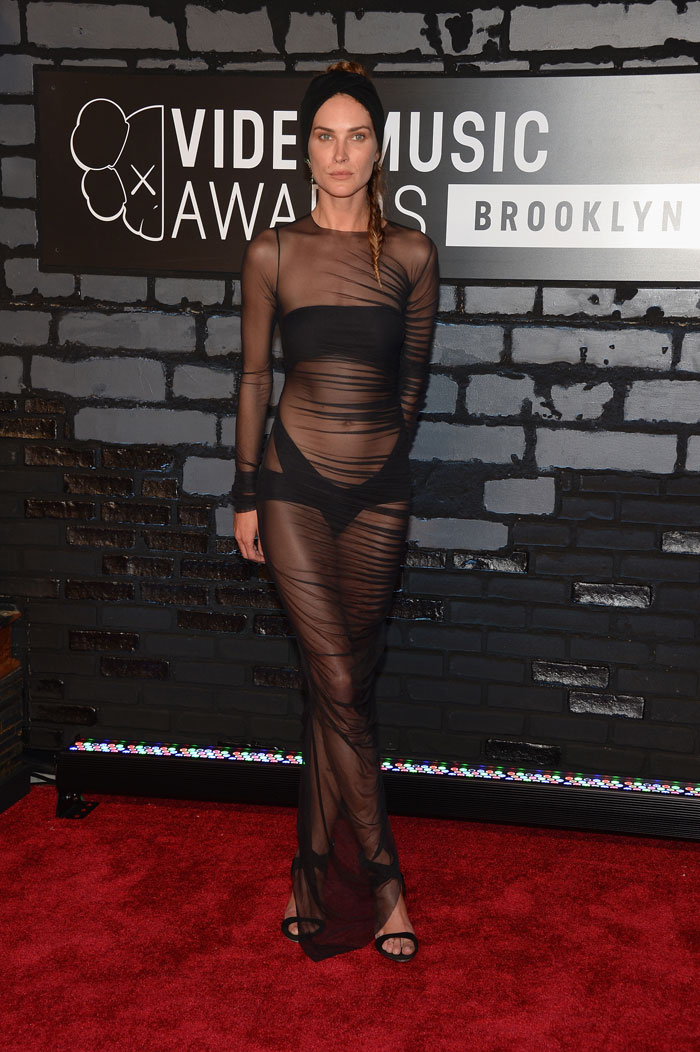 American model Erin Wasson left very little to imagination when she turned up at the 2013 MTV Video Music Awards on Sunday, August 25, at the Barclays Center in Brooklyn wearing a dress so sheer it seemed hardly worth the bother of wearing anything at all.

The black sheath, created by Alexandre Vauthier, was high-necked and full-sleeved but completely see through, with Erin's modesty preserved by black bandeau-style underwear.

She accessorized her outfit with a black turban and black stilettos.

However, the ensemble left fashion critics cold. Erin made it to most worst-dressed lists across the Internet, even eclipsing other outlandish outfits like Miley Cyrus' '80s -style beaded leggings and crop top. Gwyneth Paltrow, who was named the 'Most Beautiful Woman in the World' by People magazine, wore an Antonio Berardi column dress at the Hollywood premiere of Iron Man 3.

The dress was demure seen from the front but revealed the entire length of the actress' toned legs and hips seen from the side. Gwyneth, who plays Tony Stark's love interest Pepper Potts, is known for her fashion choices but rarely takes the sexy route on the red carpet.

Ahead: Is this the cheekiest LBD ever? 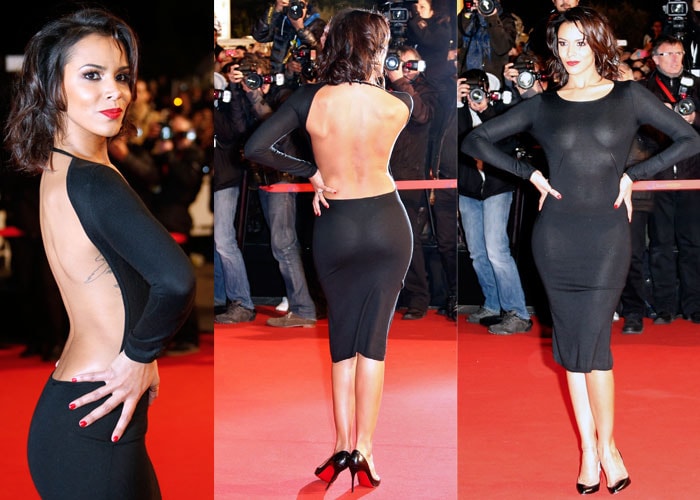 French singer Shy'm's see-through backless dress had all the cameras clicking away at the 14th Annual NRJ Music Awards held on January 26, 2013 in Cannes. She poured her curves into an anything-but-basic black dress by designer Franck Sorbier, completing the look with red lips and Christian Louboutin pumps. 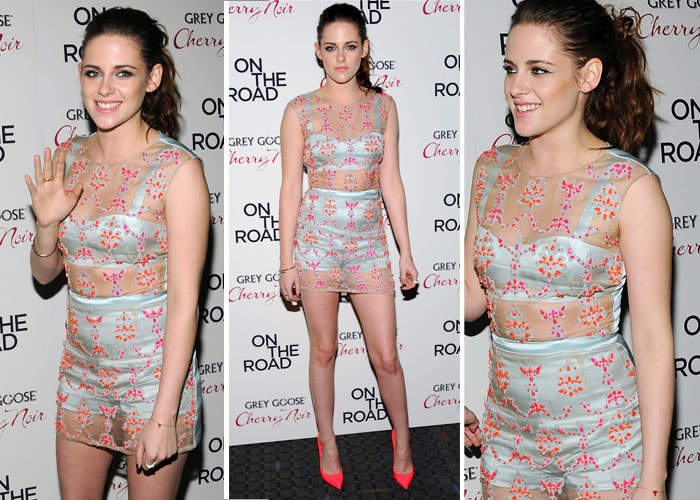 Kristen Stewart continued her risqué red carpet run at the premiere of her movie On The Road in New York. She wore this minty Erdem Moralioglu see-through with satin underthings and dress with neon Christian Louboutin heels. But far from being a sheer delight, Kristen looks like she arrived at the wrong party. The retro-style ensemble would be great on the French Riviera, but not on the red carpet in icy New York. We do like smoky-eyes and couldn't-care-less hair though. Designer Zuhair Murad has stood Kirsten Stewart in good stead at the US and UK premieres of The Twilight Saga: Breaking Dawn – Part 2. Kristen made sure she was the centre of attention in London in this revealing black lace and sequinned jumpsuit. Co-star and boyfriend Robert Pattinson looked only too happy to have her on his arm.

Coming up: The nude see-through Zuhair Murad she wore in Los Angeles 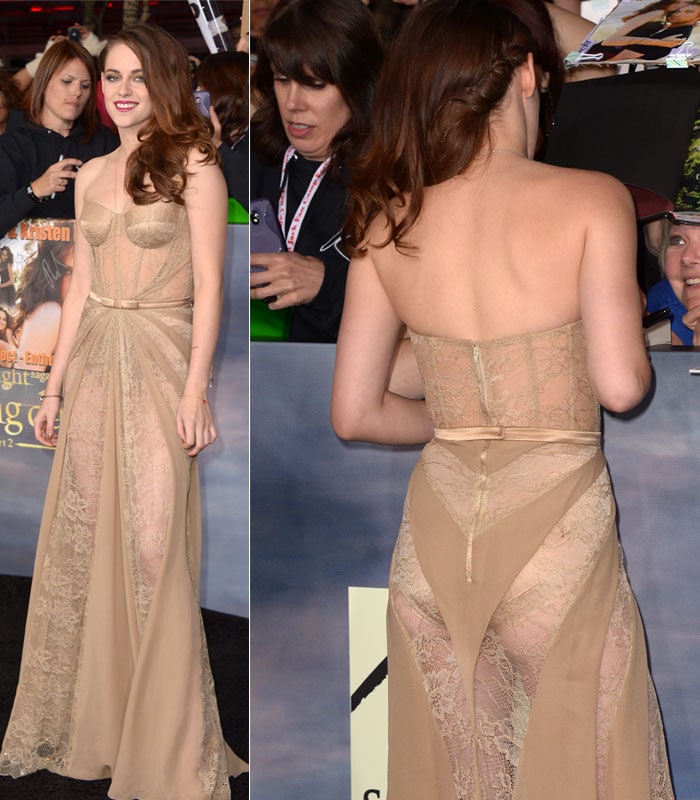 Golden girl Kristen Stewart looked stunning but risqué in a sheer lace Zuhair Murad gown at the premiere of her movie The Twilight Saga: Breaking Dawn - Part 2 in Los Angeles. Kylie Minogue might be 44 but age hasn't made her shy in the least. She attended the New York Film Festival in a green lace gown that exposed much of her famous figure.. She kept her makeup minimal and opted for soft curls for her hair. But, really, who was looking at her hair?!

Coming up: We can see right through model Doutzen Kroes. 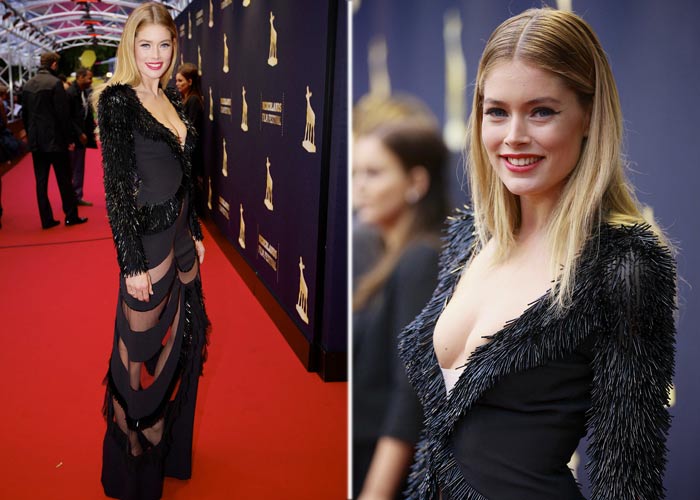 All eyes were on Dutch model Doutzen Kroes at The Golden Calf award ceremony of the Netherlands Film Festival, as she stepped out in a revealing Viktor & Rolf black gown which had strategically placed patches to protect her modesty. The gown had a fringed coat style top with full sleeves.

Coming Up: Padma Lakshmi is a sheer delight 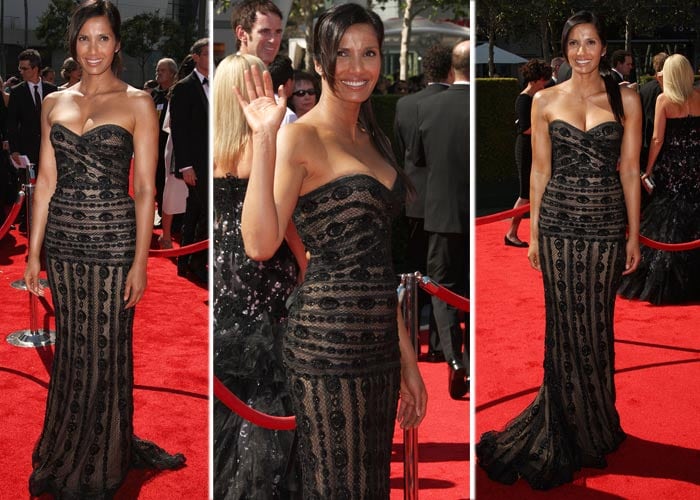 Actress, model and television host Padma Lakshmi, who is known for her style statements, poured her curves into sheer black lace at the Creative Arts Emmys last weekend. Salman Rushdie's ex-wife wore a black strapless gown that barely managed to contain her abundant bosom. The cleavage-revealing dress had silk lace details which also exposed small sections of her back.

Coming Up: Other revealing dresses on the red carpet. 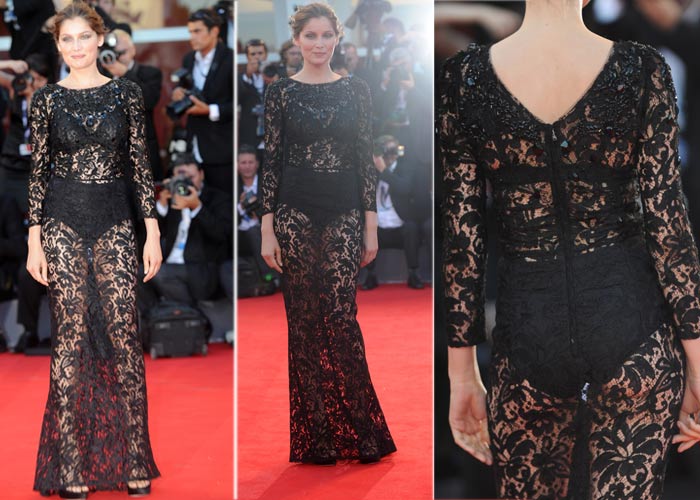 French actress Laetitia Casta grabbed eyeballs at the opening ceremony of the 69th Venice Film Festival on Wednesday when she appeared in this sheer dress on the red carpet. The actress wore a see-through lace Dolce & Gabbana gown with black lingerie underneath. As she boldly strolled the red carpet amidst the camera flashes, she surely left a slew of dropped jaws in her wake.

Coming up: How low can Tika's dress go? Actress Tika Sumpter had found a sure-fire way of getting and keeping all eyes on her at the world premiere of Sparkle at Grauman's Chinese Theater in Hollywood, California. This red gown by Marc Bouwer did the job perfectly with it's plunging neckline and thigh high slit. 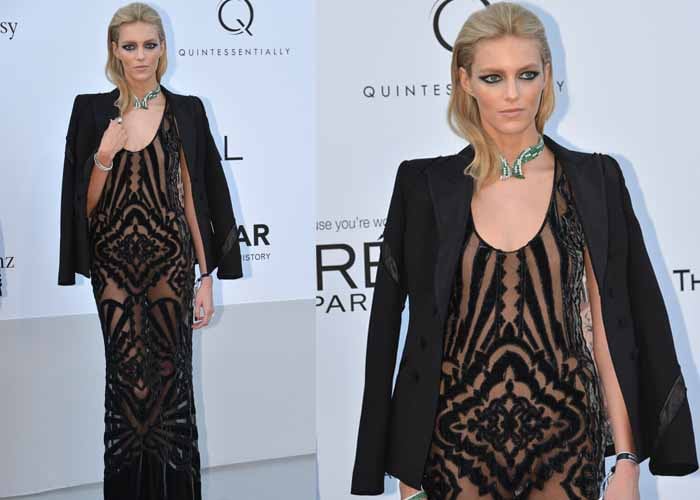 Victoria's Secret model Anja Rubik followed up her hip and leg show at the Met Gala with a black Emilio Pucci burnout dress and a sharp blazer at Cannes. That's one dress we're sure you won't be able to buy off the peg. 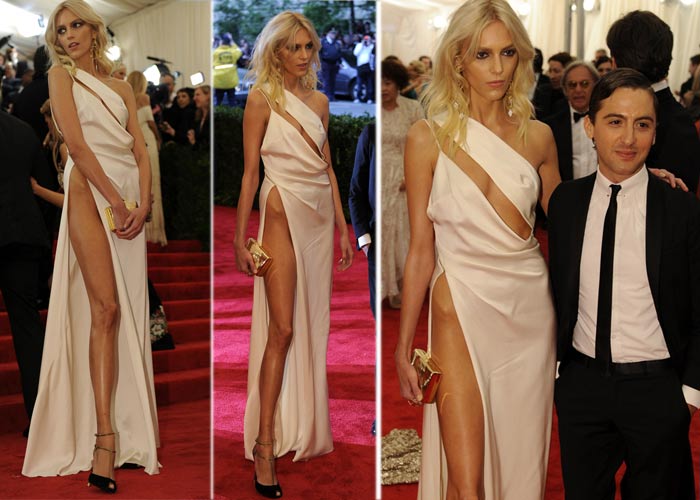 Victoria's Secret model Anja Rubik didn't leave much to the imagination as she stepped out in an Anthony Vaccarello slinky silk dress. The model showed off her well-toned figure via a slit right up to her hip.

Ahead: Other eye-popping moments at the red carpet. 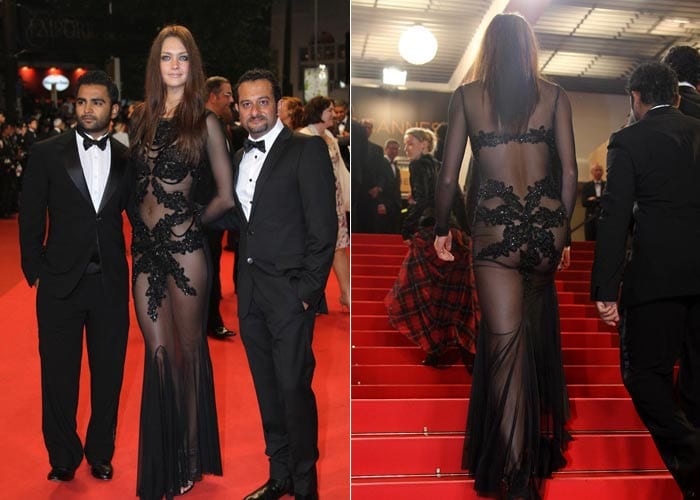 Candice Boucher, who made her Bollywood debut with Azaan in 2011, left a trail of dropped jaws in her wake as she walked the red carpet at Cannes in 2011.

The Playboy model was just as appealing from behind. 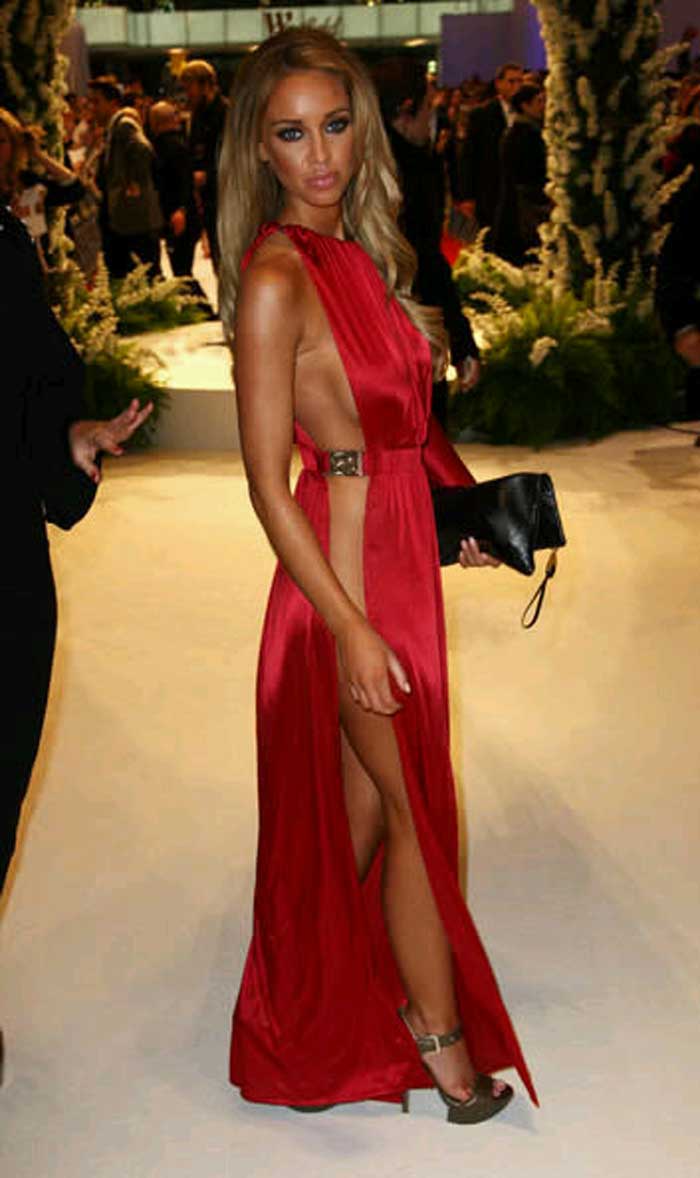 Reality TV star, Lauren Pope, arrived at the UK premiere of the The Twilight Saga: Breaking Dawn - Part 1 in a hot red Louis Heal gown held together at the sides by mere willpower, and certainly no underwear.

The lady tweeted: "On way to Twilight prem w/ @LaurenGoodger, hope we aint too late! I musta used a whole roll of tit tape on my dress, pls stay in place!! Ha", followed by another tweet: "Wow so many lovely comments bout my dress for the Twilight premiere, it was made by the v talented @LouisHeal and heels r Camilla Skovgaard!" 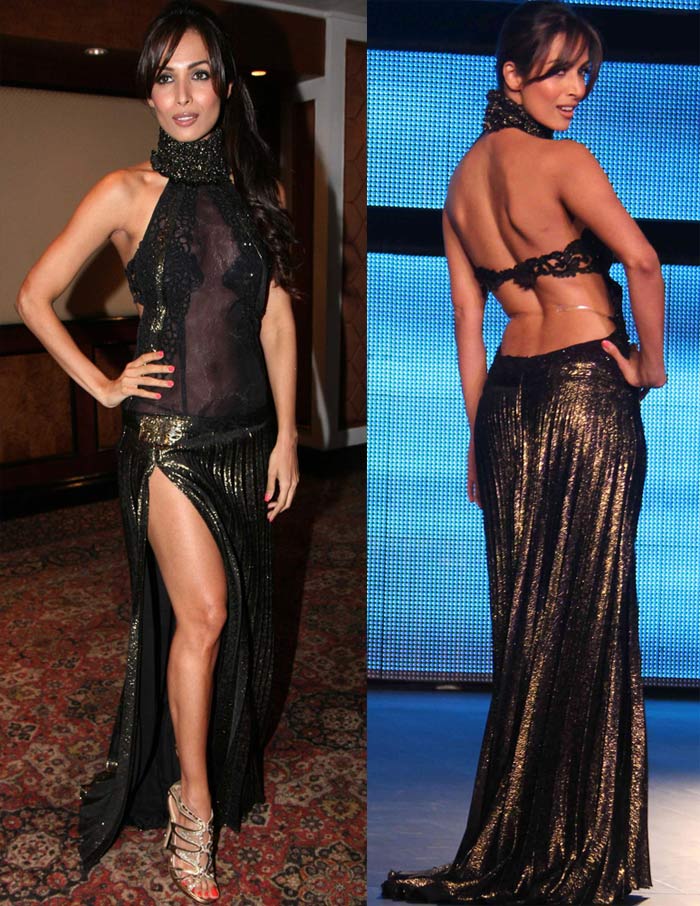 Malaika Arora Khan, who's never been shy to show off her fabulous figure, walked the ramp for designer Mandira Wirk in a dress that left very little to the imagination. Aishwarya Rai in a slinky, cutout dress at Cannes, 2004 - an unusually revealing choice for the usually demurely dressed star. 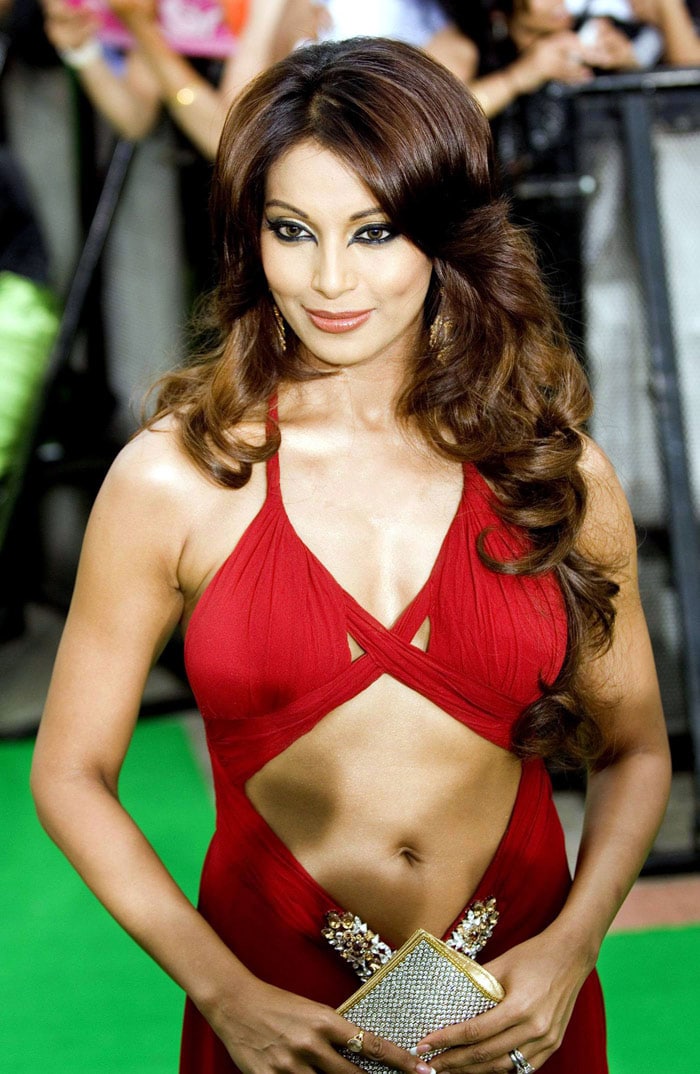 Bipasha Basu spelled red for danger at IIFA, 2007. She often plumps for a thigh skimming, cleavage baring dress but rarely chooses to flash her midriff as she did here. 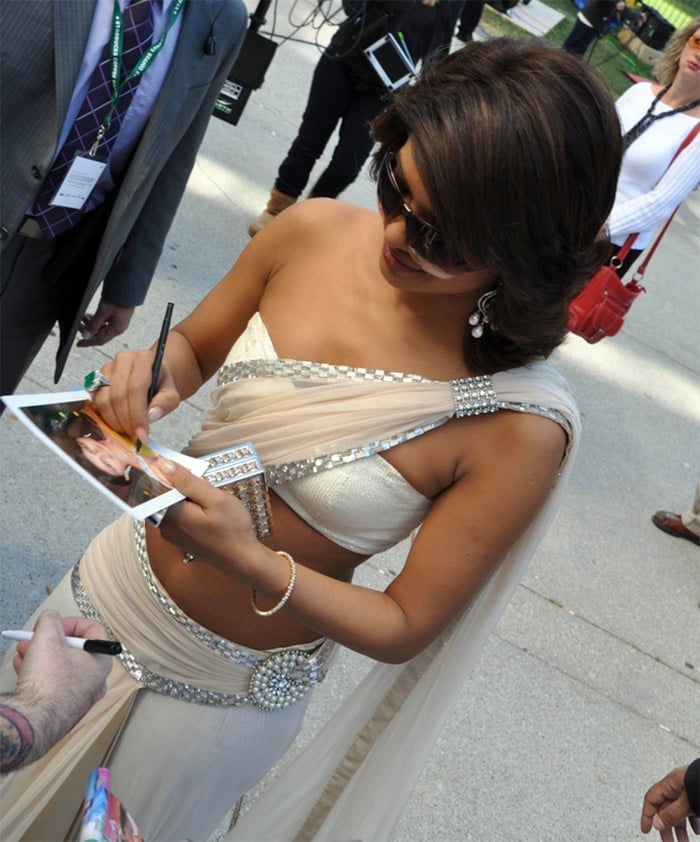 Priyanka Chopra sassed up her saree-choli combo by showing as much of her toned torso as she possibly could at the What's Your Rashee premiere in September 2009. 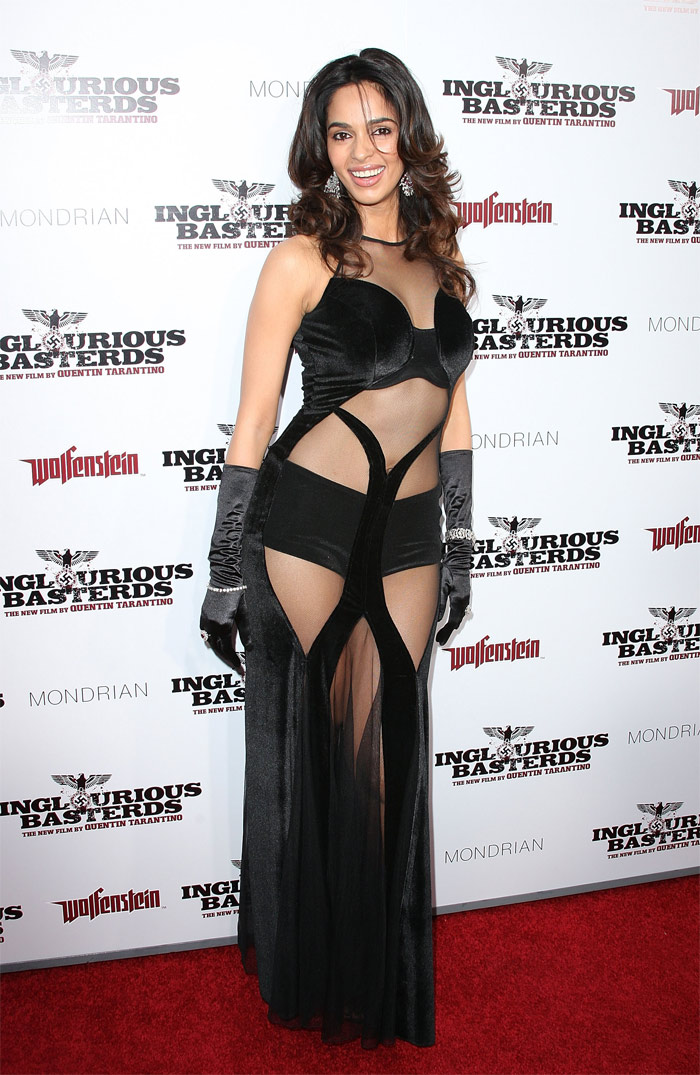 Mallika Sherawat at the premiere of Inglourious Basterds, August 2009. No surprises here! Cher went to the Oscars in 1986 in a bizarre black gown complete with headdress by Bob Mackie. Two years later she collected her Best Actress award in another revealing Mackie outfit. 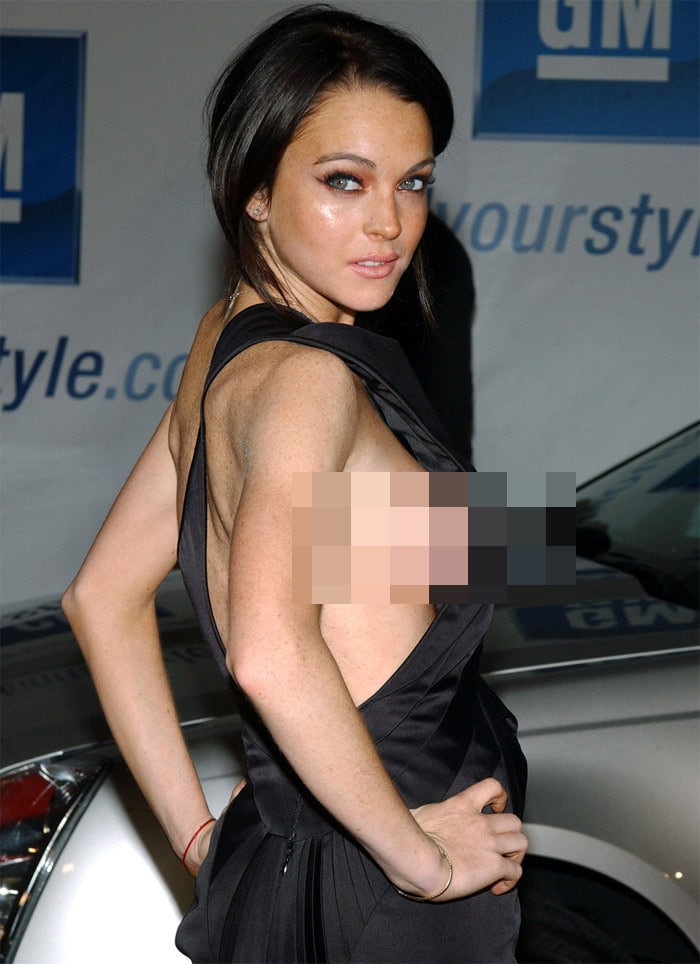 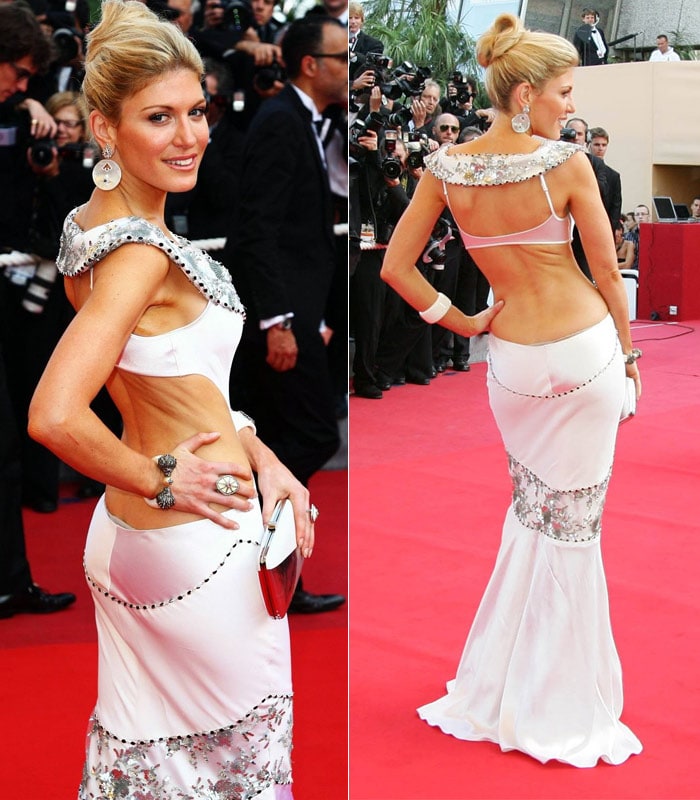 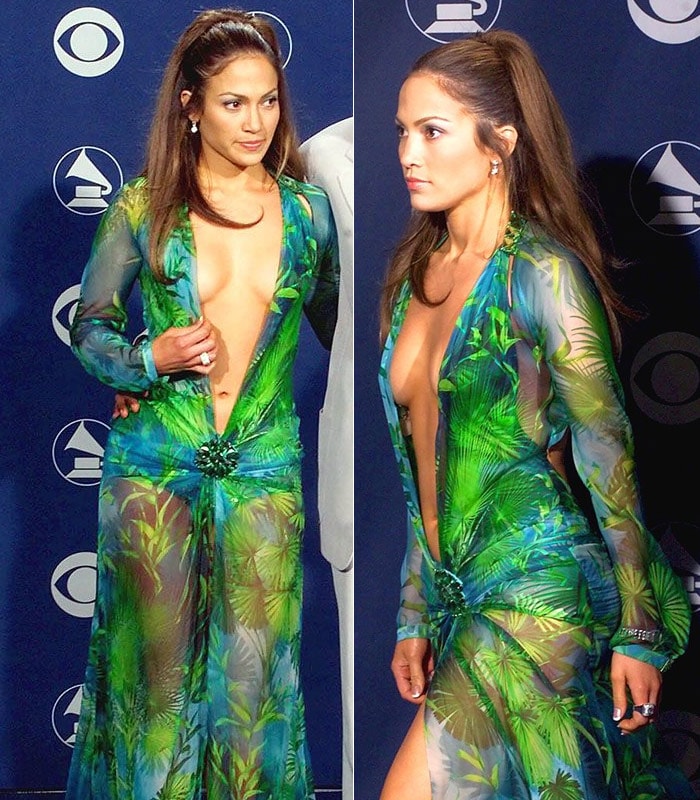 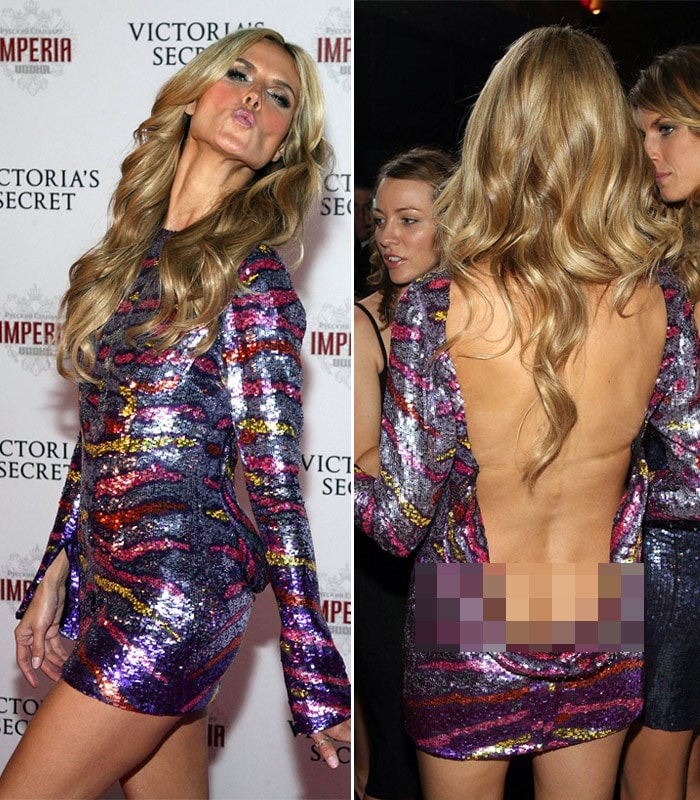 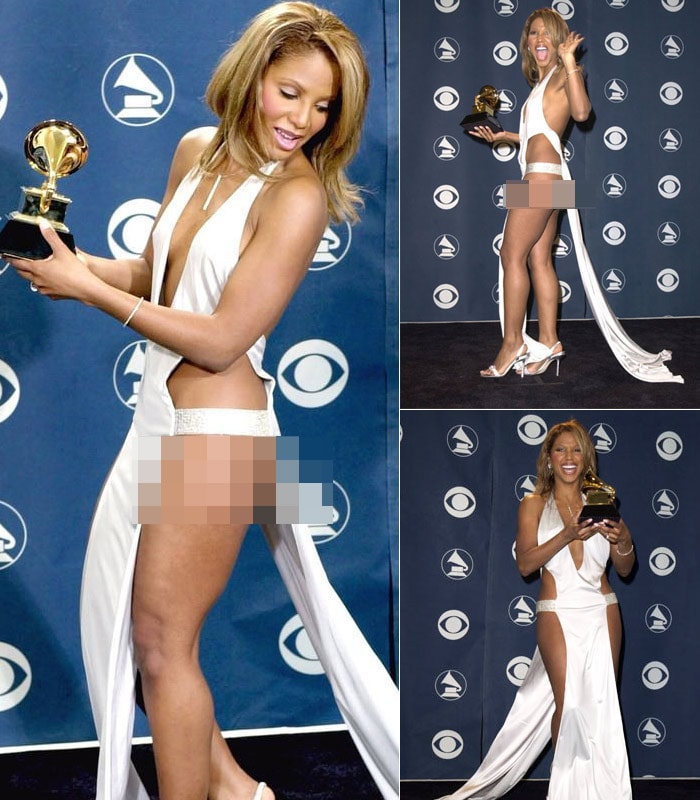 Toni Braxton, then 40, wore a Richard Tyler dress that was pretty much made up of a few strips of white satin at the Grammy Awards, 2001.