Here's a peek at the most memorable Oprah Winfrey Show episodes, as the queen of talk shows steps down. 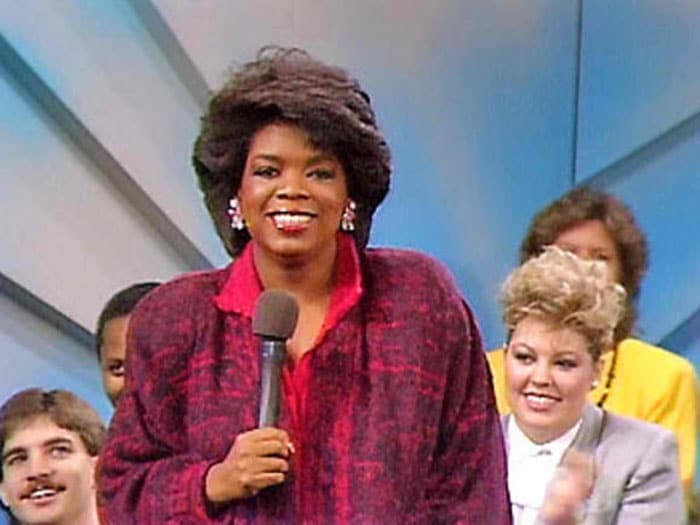 Oprah's first show (1986)
The small start to something big: September 8, 1986 was the day ‘meaningful entertaining television' changed forever. It was the day Oprah Winfrey, 32 at the time, began her nationally syndicated talk show. Prior to the O phenomenon, the show was a half-hour morning talk show airing on WLS-TV in Chicago.
Oprah fought hard to win her place in daytime national TV. Over the years she would turn the show into a conglomerate that includes movies, plays, books, documentaries, magazines, radio, spinoff shows and, most recently, a brand-new television network called OWN.
“Surround yourself with only people who are going to lift you higher” said O and for millions of her fans, she did just that.

The Elizabeth Taylor interviews (1988)
Just before that first legendary interview, Elizabeth Taylor announced that she would not talk about her famous relationships, and gave short answers to all of Oprah's questions. In 2009, Oprah Winfrey said her interview with Taylor was her worst interview in 20 years.
"It's still painful to watch," she said. "For many reasons—including my bad hair."
Four year later, Liz Taylor was back on Oprah and this time she opened up on her relationships, her close friendship with Michael Jackson, her time in rehab and her tireless work as an AIDS activist. 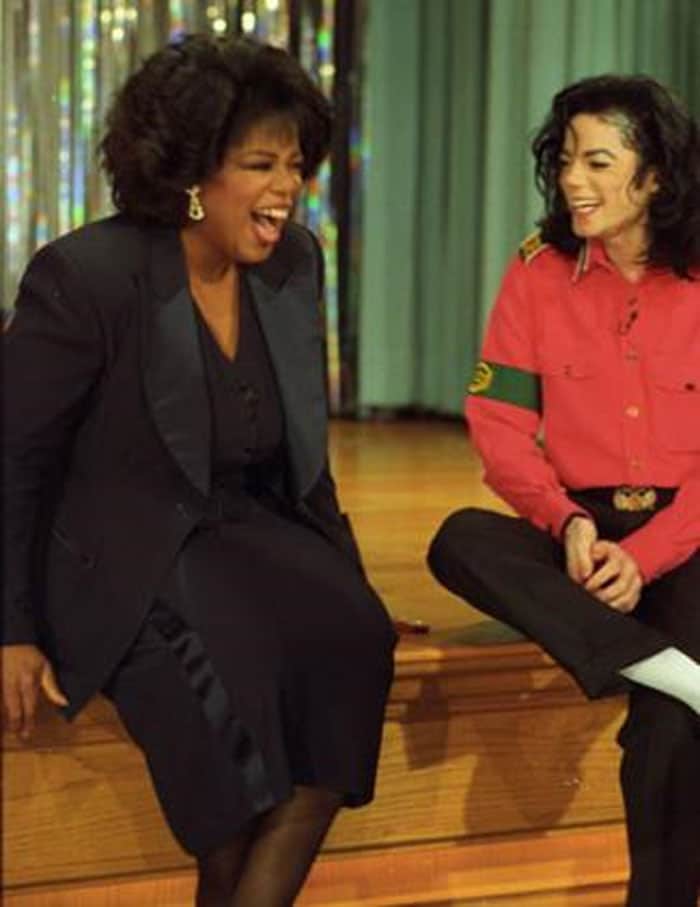 The Michael Jackson interview (1993)
In a world exclusive interview, Oprah pulled down the walls of Michael Jackson's Neverland.
MJ opened his home and his heart for a one-on-one with the talk show queen about the inner-workings of the man, an attempt to dispel the 'Wacko Jacko' image.
MJ: "People wonder why I always have children around. It's because I find the thing that I never had through them. Disneyland, amusement parks, arcade games—I adore all that stuff because when I was little, it was always work, work, work." 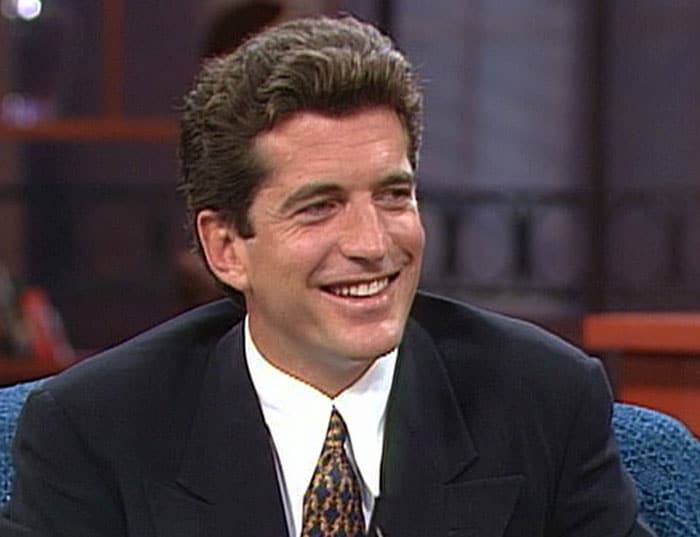 Oprah with John F. Kennedy Jr. (1996)
For her 11th season premiere, John F Kennedy Jr sat across O, for an intimate discussion about his life in the limelight.
Slightly nervous, he talked about his right to privacy, his father, mother and his then upcoming magazine 'George'. Oprah later said: "He is more timeless than ever. He is statuesque. He has such wonderful presence. He feels calm," she says. "Even though I know that he was nervous, he feels in control." 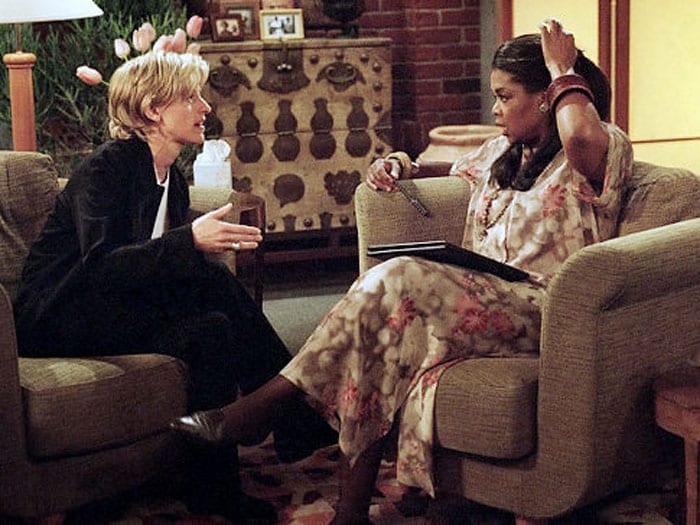 Ellen DeGeneres comes out (1997)
In 1997, Ellen DeGeneres spilled her deepest darkest secret in front of Oprah and her millions of viewers. The now successful talk show host, Ellen came out to the world about her lesbianism on the cover of TIME magazine, saying, “Yep, I'm Gay.” At the receiving end of the backlash, Ellen opened up to Oprah about the ordeal of facing family, friends and dealing with their reactions.
Ellen on coming out: “Well, I've known since I was a little girl, that i was different. Guys are great... but...” 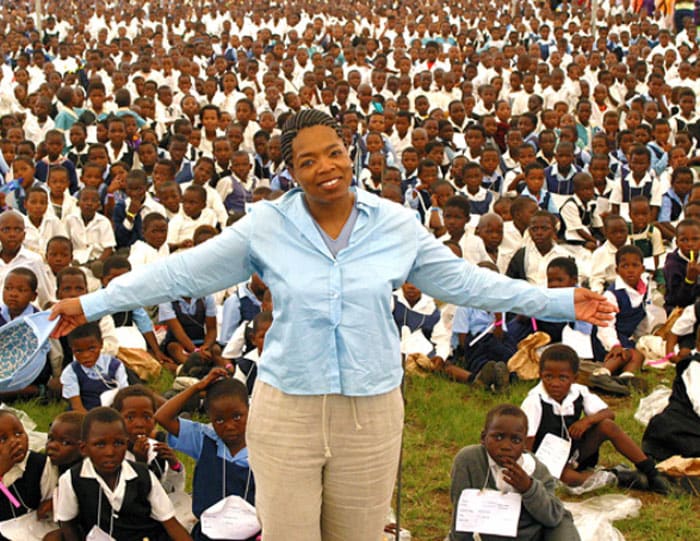 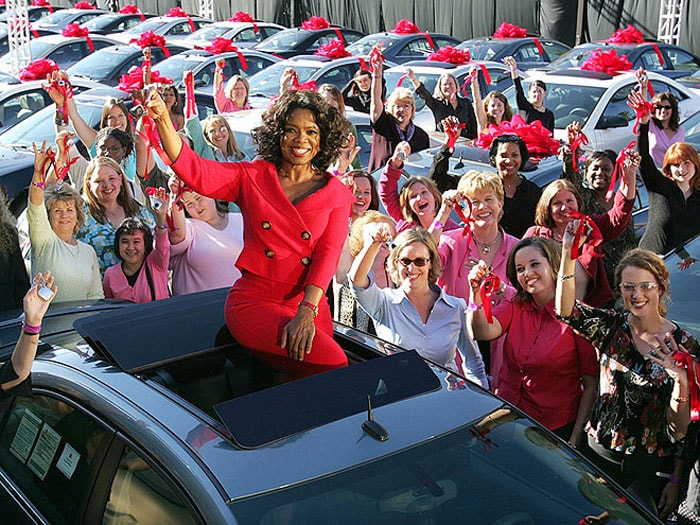 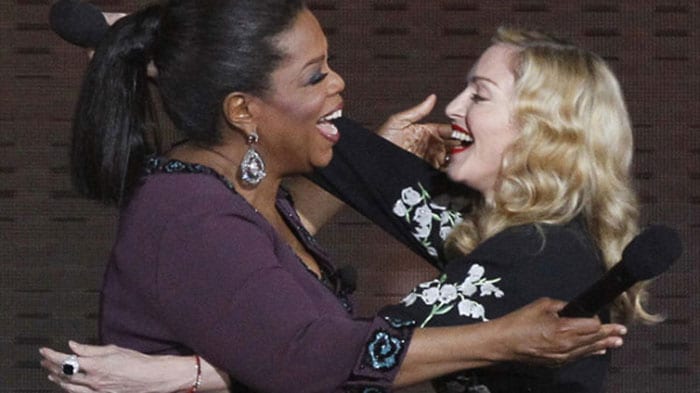 The Queen of Pop, Madonna (2004):
Madonna spoke about her marriage to Guy Ritchie, motherhood and her music on the Oprah Winfrey show in 2004. The Material girl, who has transformed herself repeatedly spoke to O about her principles, her inner-workings and her relationships.
It was the side of Madonna few ever had privy to as she said: "That my husband is my soul mate. That I'm going to meet my mother again someday. That there are no mistakes or accidents. That consciousness is everything and that all things begin with a thought. That we are responsible for our own fate, we reap what we sow, we get what we give, we pull in what we put out. I know these things for sure." 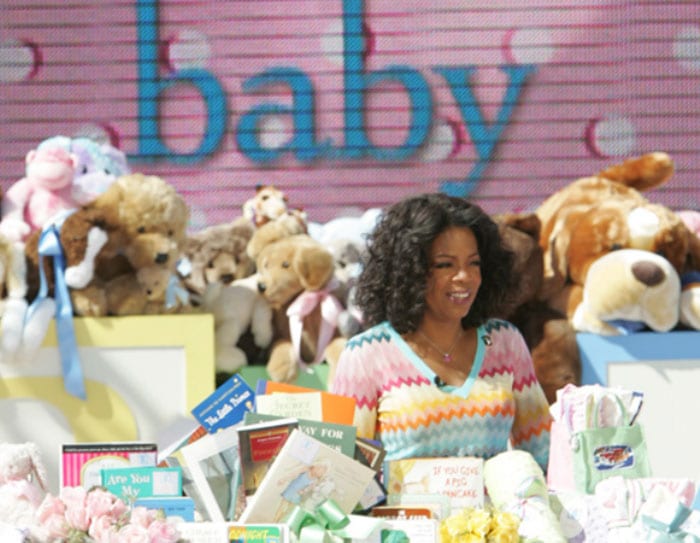 Baby Shower Surprises at the Army Base (2004)
Six hundred and forty moms-to-be at the Fort Campbell Army Base in the US got a surprise baby shower from Oprah. She was joined by the former supermodel and mom, Cindy Crawford. 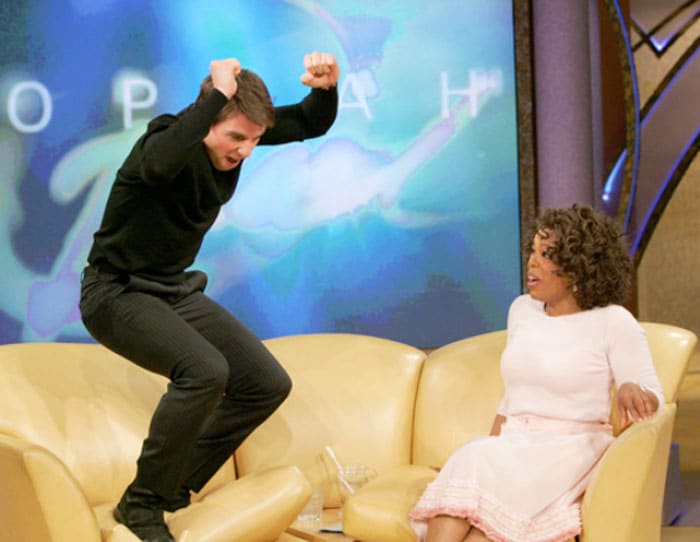 Tom Cruise on O's couch (2005)
Tom Cruise first appeared on Oprah's show in 1988 and since then, has appeared on the show 12 times.
The most famous (and parodied) appearance would be the one on May 23, 2005, when Cruise professed his love for his then new girlfriend, Katie Holmes. The world watched as the Hollywood hunk went gaga over his new love, bouncing on Oprah's couch, even hopping on one knee. It was Tom Cruise as never seen before. 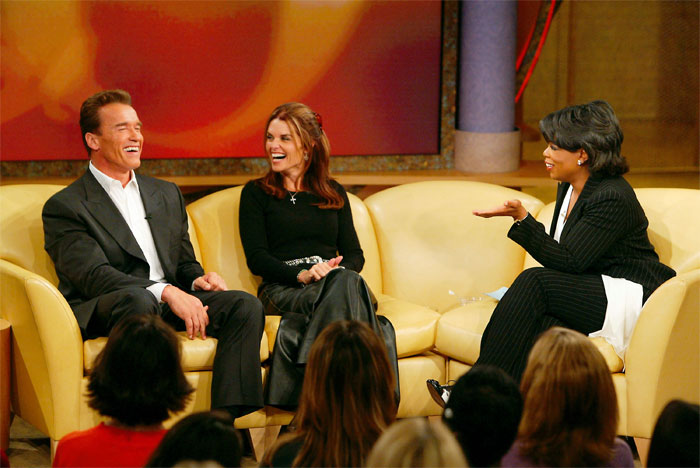 The ‘Reluctant' First Lady of California (2008)
After 30 odd years of friendship with Oprah, Maria Shriver graced the Oprah show as the first Lady of California. On the show, she spoke about family, work and how she was asked to quit her job after her husband's victory. For her, it was a loss of identity as a working woman which she had carefully built and nurtured.
Maria Shriver joined Oprah on her final episode, as news of Arnold Schwarzenegger's alleged affair and love-child swept across the world. Maria said “Well Oprah, for more than 30 years, you bestowed the most amazing friendship on me, given me love, support, wisdom and most of all truth.” O-watchers say the “truth,” is Maria's likely reaction to the recent scandal in her 25-year marriage. 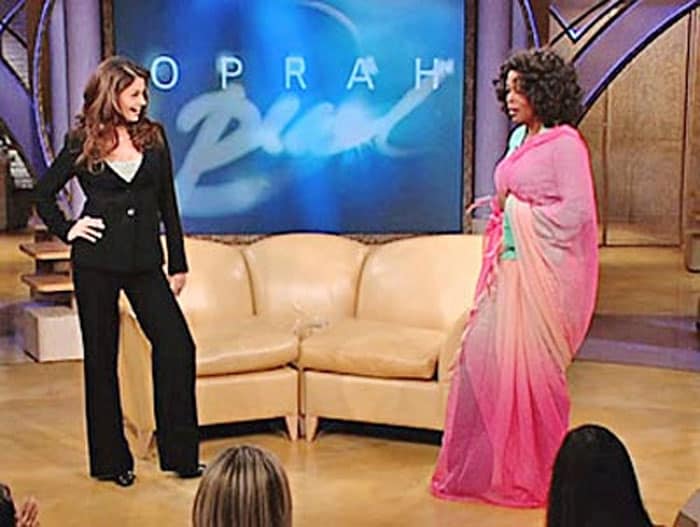 Aishwarya's debut on Oprah (2005)
In 2005, Aishwarya Rai became the first Indian to feature on the Oprah Winfrey show. The former Miss World looked at ease on the show and taught O to drape a saree. O on her part, found the saree ‘sensual'. 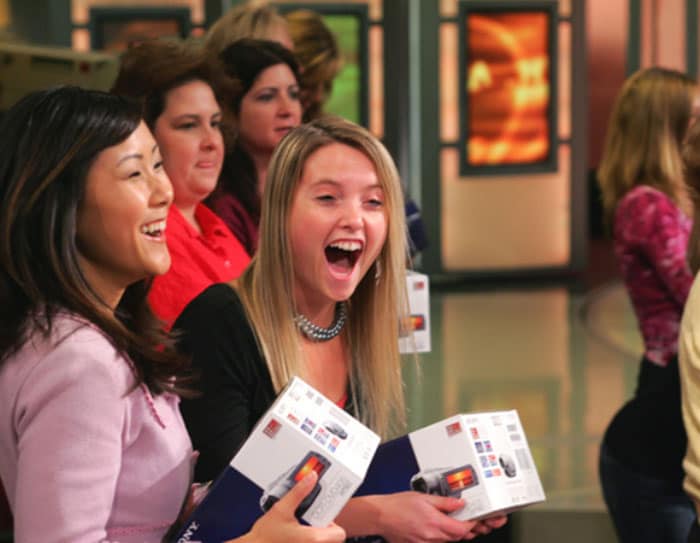 Paying it forward
Pay it forward was the theme, when on a 2006 show, Oprah gave each member of the audience $1000 and a camera. They were asked to pay it forward in inspirational ways and record themselves helping others. 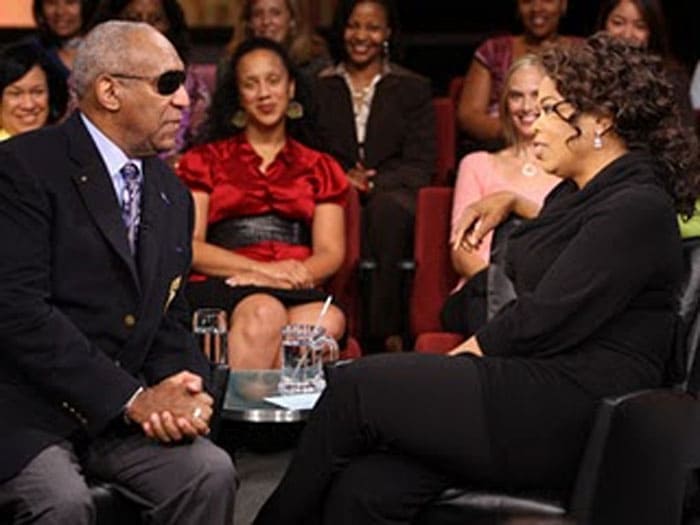 America's favourite dad - Bill Cosby (2007) Bill Cosby came on the Oprah show in 2007, and scooped out all the “dirty laundry”. Promoting his book, “Come on, People” Cosby spoke candidly about the issues plaguing the younger generation that was facing isolation .
“Our children are trying to tell us something…and we're not listening," he said. 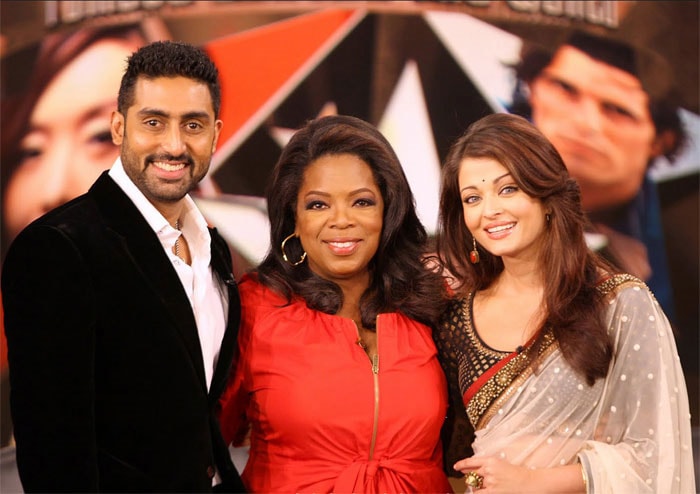 Aishwarya and Abhishek Bachchan (2009)
Titled the 'Bollywood Love Story', 2009's season featured Aishwarya with husband Abhishek Bachchan on the sets of Oprah. This was their first television interview together. Abhishek even spilled the beans on his decision to marry Aishwarya: "I was filming in New York for a movie," he says. "And I used to stand on the balcony of my hotel room and wish that, 'One day, wouldn't it be nice if I was together with her, married.”
Abhishek said years later, after the premiere of Guru, he took Aishwarya to the same balcony and proposed to her. 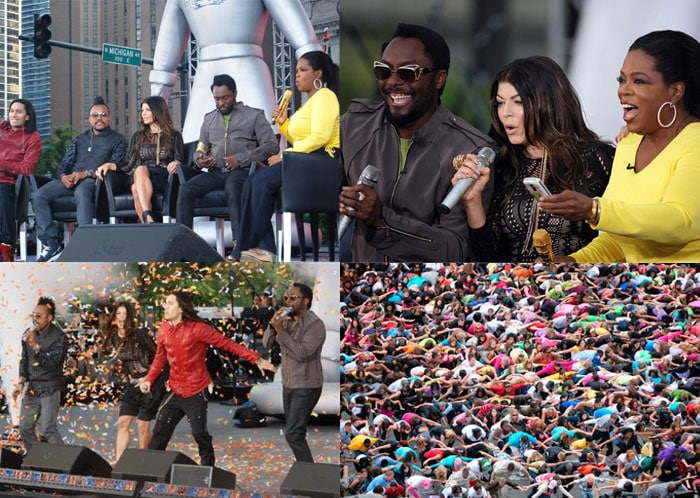 A flash mob dances for Oprah (2009)
Oprah's producers were the ones giving a surprise this time around when in September 2009 they organized a flash mob of more than 20,000 people in Chicago. The show got the mob to dance to The Black Eyed Peas' "I Got a Feeling." The show was nothing short of mesmerizing. 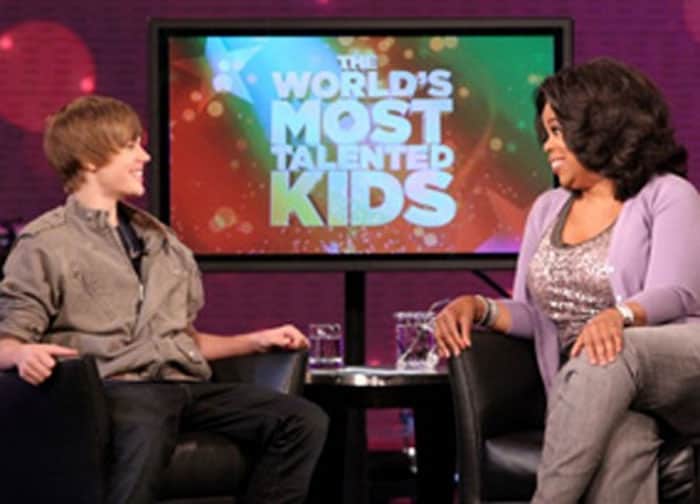 Bieber mania on Oprah (2010)
Bieber mania is everywhere and so was it on Oprah. Oprah asked Justin what he did to maintain his ‘kid-ness' and the pop star confessed that on his one off day per week, he sometimes just sleeps in. JB's mom Patty `was on the show too, giving an insight into bringing up her famous son. 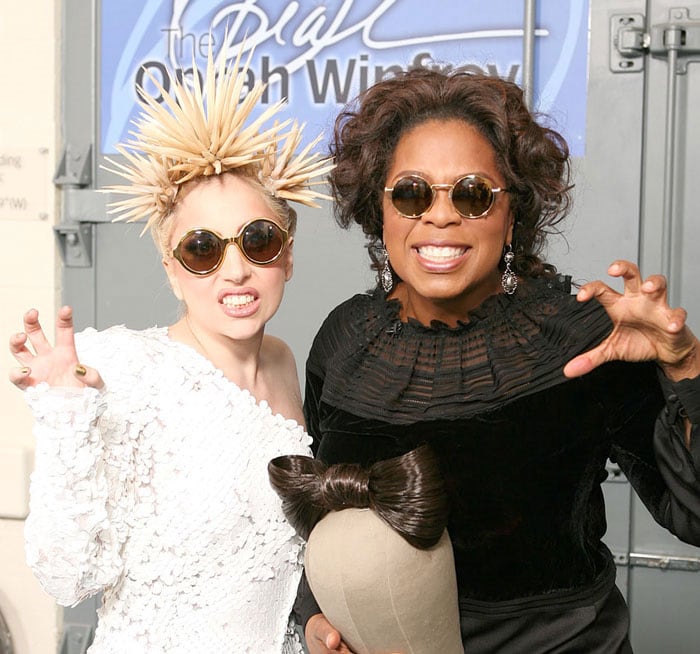 Lady Gaga's gifts for Oprah (2010)
It's a side of Lady Gaga we would never believe exists – on the Oprah show the pop star spoke about the message behind her music, how she got her name what she really wants her fans to know. Lady Gaga also gifted Oprah a special hair bow made by her. 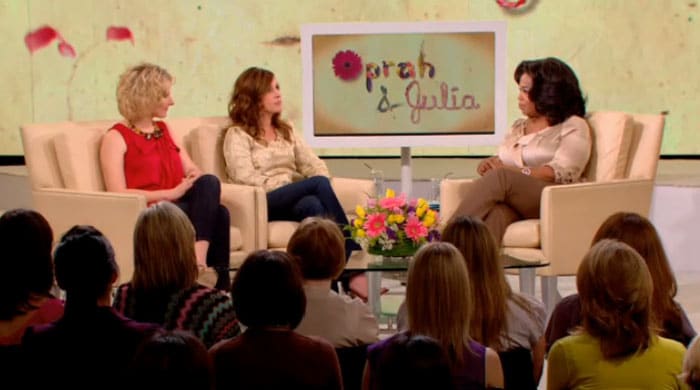 Pretty Woman Julia Roberts (2010)
In 2010, the Eat, Pray, Love actress made an appearance on Oprah with the author of the best-seller Liz Gilbert, and gave an insight into her journey as an actress and her personal journey while shooting for the film in India and Italy. 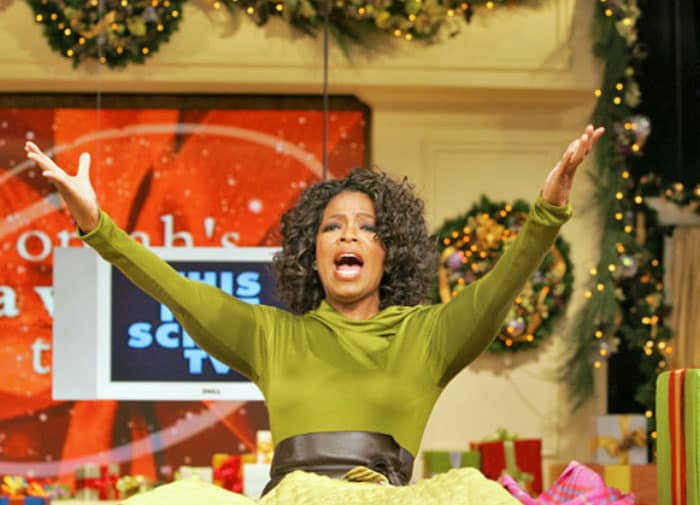 Favorite Things (2010)
Oprah gave plenty of freebies on her 2010 show of Favourite Things! She gave away candles, refrigerators, books and plenty more to a crowd of screaming, crying audience. 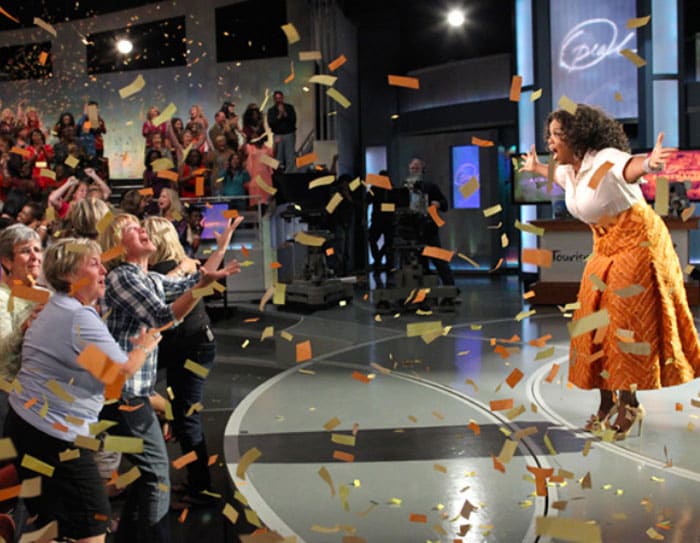 Once-in-a-lifetime Down Under (2010)
Oprah began her talk show's 25th and final season in style with the surprise of a lifetime for her audience - John Travolta piloted the plane that flew the 300 audience members to Australia - courtesy of Winfrey - on an eight-day, seven-night trip that took her producers almost an year to plan. 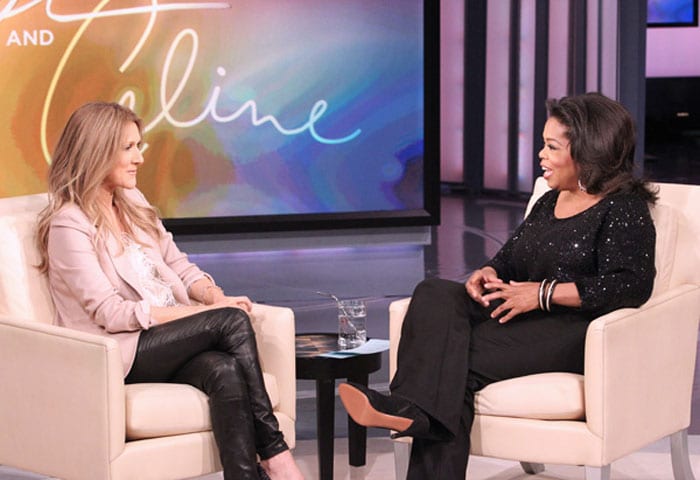 Celine Dion: O's most-frequent guest
Singer Celine Dion has carved a special place for herself in the O Show history – she is Oprah's most-frequent celebrity guest with 27 appearances! The singer first appeared on Oprah in 1996 after Oprah surprised her audience with a trip to Disney World.

Building Happy Homes (2006)
Just six months after the devastation of Hurricane Katrina, Oprah pledged $10 million of her own money toward building homes.Soon after, Oprah was on location when 12 families got to see their brand new homes for the first time. 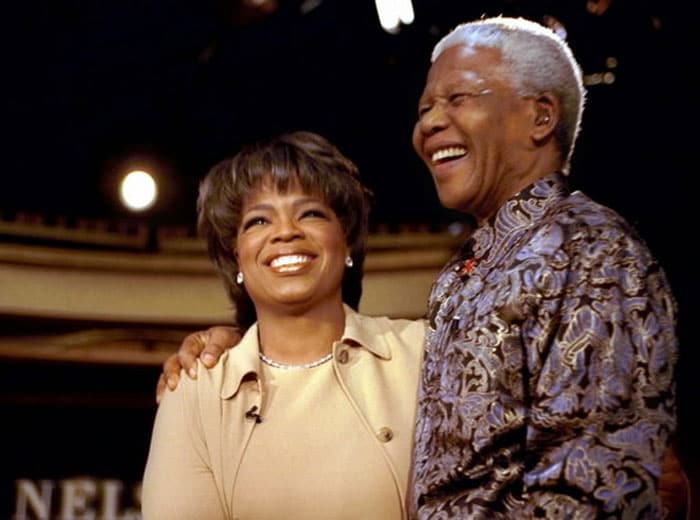 The Nelson Mandela interview (2000)
Nobel Prize winner Nelson Mandela spent 27 years in jail, fighting apartheid. On O's show Nelson Mandela spoke about demanding respect, finding love and what he's learned about the art of peace. “You must fight the battle for dignity from the very first day,” Mandela told Oprah. 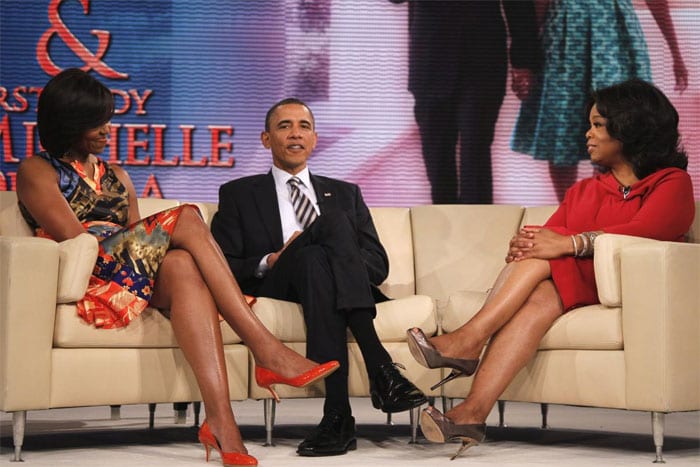 The first-ever President and First Lady (2011)
A landmark interview where Oprah hosted a sitting President and First Lady for the first time in 25 years. The Obamas spoke about life in the White House, marriage, the controversy over the President's place of birth and his birth certificate. ‘Air Force One has landed in Chicago!' said Oprah. The President on his part said, "It's always nice to find an excuse to come home."