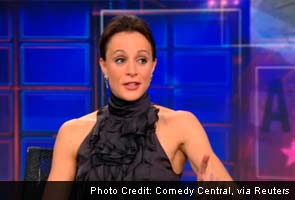 Washington: Paula Broadwell became a fixture around the Kabul headquarters of the US-led coalition in Afghanistan soon after Gen. David H Petraeus assumed command in June 2010. She was seen as ambitious and as a striver who aimed to join Washington's national security elite, and she drew resentment from officers for playing up her connection to their boss.

In television interviews, Broadwell - a Petraeus biographer whose affair with him led to his resignation on Friday as director of the central intelligence - appears assertive and confident, appearing on "The Daily Show" sporting bare, toned arms that have been the subject of considerable comment on Twitter and elsewhere.

But back in her home city of Charlotte, NC, a far more nuanced, even ordinary, picture has emerged of the woman at the center of Washington's latest sex scandal.

There, neighbours say, Broadwell is the soccer mom, married to a radiologist, who serves her family dinner by candlelight and walks her two boys to the bus stop every morning before school. She is the nice woman in the two-story brick house who wore a costume to hand out candy on Halloween.

She is the friendly neighbour who organized an impromptu backyard barbecue to welcome newcomers to the neighbourhood. She is the super-busy woman who raises money for veterans' support groups and takes time to mentor her friends' children - especially girls - by reading their school papers and introducing them to soldiers they might interview.

"It wasn't uncommon to look in their dining room at night and see the candles lit as they were eating," said Sarah Curme, a neighbour and friend. "Nobody put Paula on a pedestal; it was more about Paula the neighbour, the mom and the wife than it was about everything else she did."

Since news broke on Friday of her extramarital affair with Petraeus, Broadwell - a North Dakota native whose resume lists her as valedictorian of her high school, homecoming queen, state student council president and fitness champion at West Point - has become a national curiosity.

News crews converged on her home, which was empty; Curme said the family was away - "on vacation."

Broadwell's relationship with Petraeus was uncovered by an FBI investigation; government officials said the inquiry began with a complaint that Broadwell had sent "harassing" emails to another woman who knows the retired general. That woman was identified Sunday as Jill Kelley, of Tampa, Fla., a friend of the Petraeus family. When FBI officials followed up on the complaint, they stumbled across emails that revealed Petraeus, 60, and Broadwell, 40, were having an extramarital romance.

The two met in 2006, when Petraeus spoke at Harvard University, where Broadwell was pursuing a master's degree in public administration. The Charlotte Observer, in an article about her book, reported in January that when she told him of her interest in counterterrorism and counterinsurgency, he gave her his business card and offered to help.

Soon afterward, she asked him if she could use him as a subject of her doctoral dissertation. "Petraeus agreed," Broadwell later told Claudia Chan, who edits a website devoted to women and leadership, "and I began  to write an 'intellectual history' exploring how he'd developed his role as a maverick who galvanized organizational innovation."

When President Barack Obama chose Petraeus as his new commander in Afghanistan in 2010, Broadwell proposed turning the dissertation into a book. She teamed up with a newspaper editor, Vernon Loeb, now with the Washington Post, to write it. The Observer reported that she made six trips to Afghanistan, living with combat troops and conducting extensive interviews with the general.

"Here she has two young kids, a husband who's a doctor, and yet ... she's writing a book of this magnitude and hardly breaking a sweat," The Observer quoted Loeb as saying.

But Broadwell told Chan that it was tough juggling work and home life. "I used to think I was invincible and could do it all," she said, "but having children helped me to realize my limits."

Broadwell met her husband, Dr. Scott Broadwell, when the two were in the military and stationed in Germany. She told The Observer that they were both training to become ski patrollers, and described herself and her husband as "adventure junkies."

After they married, they decided that they would take turns choosing where to live; they moved to Charlotte about three years ago with their two young sons, Lucien and Landon, after Scott Broadwell took a job with a medical group in the city.

They live in Dilworth, an upscale neighbourhood with old-growth trees and many Craftsman-style homes that date to the 1920s.Ed Williams, a retired editorial page editor of The Observer who lives two doors down from the Broadwells, says he often sees Paula Broadwell out running in the morning. "She's kind of energetic, but not boisterous," Williams said. "She's quiet."

She has also thrown herself into Charlotte civic life, with an emphasis on charities that help veterans and their families.

The Observer reported on Saturday that Paula Broadwell has been a guest speaker for the World Affairs Council of Charlotte, and recently spoke at a black-tie benefit for the Patriot Charities, a nonprofit that supports wounded members of the military from the Carolinas and their families.

Last week, the newspaper said, she attended a tandem parachute jump in Charlotte for Cpl. David Bixler of the Army, who lost both of his legs in an explosion in Afghanistan. In September, during the Democratic National Convention in Charlotte, she co-hosted a fundraiser for wounded warriors and persuaded Jon Stewart, host of "The Daily Show," to attend.

After the revelation of Broadwell's affair with Petraeus, her friends and neighbours do not quite know what to expect next. "We've been trying to have a book party for her and invite some people from the neighbourhood," Williams, the retired editor, said. "We talked about doing it in early December. I'm not so sure that's going to go on now."

Curme, who said she was in touch with Broadwell by text message and email on Saturday, said the Broadwells are "very united and will get through" the emotional turmoil of an infidelity that is playing out in public view.

"Obviously she has made a mistake," Curme said, "but I really do believe she is probably better equipped than about anybody I know to figure her way out of this in a really positive way, without destroying anybody. That's just not her nature. Whatever has happened, I suspect Paula will step up and take accountability, and nurture her family."

Promoted
Listen to the latest songs, only on JioSaavn.com
(Matthew Rosenberg contributed reporting from Kabul, Afghanistan, and Viv Bernstein from Charlotte, NC.)