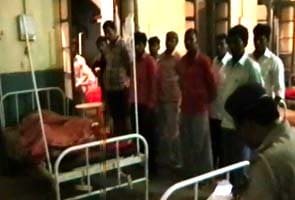 Police say, 17-year-old Chintu Kumar was allegedly set on fire by the rape accused in Garabigha village under Narhat police station near Patna.

"Chintu was expected to appear in the court in connection with the case," police said. According to villagers, the accused forcibly entered Chintu's house in the afternoon and set him on fire.

Police say, the accused are absconding since the incident.

Chintu's mother Taruna Devi, who was allegedly gangraped in 2006 by five men of her village, told IANS over telephone that her only son had been threatened to withdraw the case and not appear as a witness in court.

"The accused repeatedly threatened to burn him alive and finally they did it. Where is the rule of law in Bihar? There is no place for the poor seeking justice," she said. Taruna Devi alleges that the rape accused were powerful men with muscle and money power.

"I was told I would be taught a hard lesson if the case against them was not withdrawn. They also told me time and again to shell out Rs one crore to police and officials, including the judge. After all, they are rich people, we are poor and weak," she said.

Ironically, top district officials are reluctant to talk about this shocking incident. Even those at the police headquarters here say they can say something only after receiving reports from district officials.

However, the opposition Rashtriya Janata Dal, Lok Janshakti Party, Congress and Left parties have condemned the incident and blamed Chief Minister Nitish Kumar for the deteriorating law and order situation in the state.

Promoted
Listen to the latest songs, only on JioSaavn.com
"The latest incident has again exposed a total collapse of law and order. Poor people have been targeted by the powerful in Bihar. We will protest against it," leader of opposition Abdul Bari Siddiqui said.

Opposition leaders are likely to visit the village to meet the victim's mother and inquire into the case soon. All the nine accused roamed free Monday, a day after they shockingly burnt alive a teenager who was the main witness in his mother's rape in 2006, police in Bihar's Nawada district said.