With Sixth Budget, Government Has Made A Mockery Of Constitution

The interim Finance Minister, Piyush Goyal, rose to present the interim budget for 2019-20 in the Lok Sabha on February 1, but in a 22-page budget speech spread over 105 minutes, he sought to present a full budget. For the benefit of my readers, I may point out the difference between a full budget and an interim budget,which also contains a vote-on-account proposal. A full budget is preceded by an economic survey. The budget consists of the expenditure budget and the demands for grants of various ministries, also new revenue proposals in the finance bill. An interim budget does not include new items of expenditure but a regular budget does. It is also not accompanied by a finance bill. So, as far as this budget is concerned, while the economic survey was not presented to Parliament, it had all the other elements of a regular budget. This is in complete violation of the constitution and the constitutional practices and conventions of seven decades. It is another matter that this government, especially this prime minister, have treated long-established conventions of our constitution and polity with such disdain that it has ceased to matter. Nobody even mentions it now.

This is not merely a populist budget; it is a "cash-for-votes" budget. The finance minister has announced that every small and marginal farmer will receive an income support of Rs 6,000 per year. Strangely enough, this item of expenditure has been introduced with retrospective effect from December 1, 2018. How strange. Thus by the end of March, each farmer would receive Rs 2,000 in his account from the government. The Lok Sabha elections will be held in April and May this year. The intention of the government therefore, clearly, is to give the farmer Rs 2,000 in cash just before the elections, in order to secure his vote. It is illegal for a candidate to do so. He can go to jail if he is caught doing so (this applies after the candidate files his nomination and the model code has kicked in). How ethical is it for the government to do so with government funds? 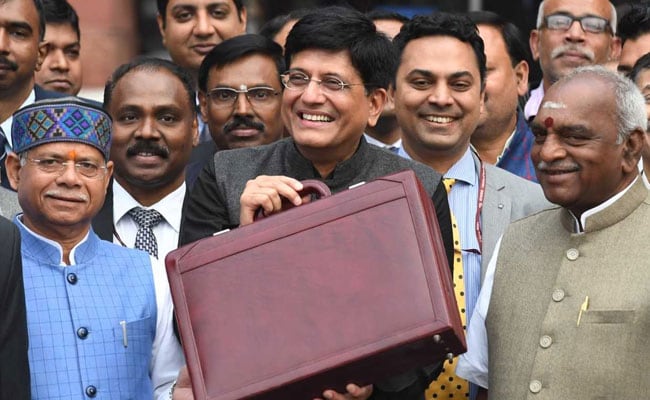 Rs 500 per month is at best a pittance. I had suggested earlier that a sum of Rs 12,000 to 18,000 per year be paid as income support to the farmer, taking into the account the size of his landholding. My other suggestion was that this step should be accompanied by comprehensive agricultural sector reforms like the removal of all trade restrictions including export restrictions on farm produce, extension services for the farmer at his doorstep, storage and processing facilities, financing through Kisan Credit Cards etc. The government's approach is restricted to only giving the farmer a dole. The farmer has his own dignity; he does not want charity, what he wants is his right.

The insurance scheme for the workers of the unorganized sector, which will fetch them a pension of Rs 3,000 per month after the age of 60, is also ill-conceived. It will require a worker to shell out Rs 100 per month or Rs 1,200 per year as his contribution. My experience would suggest that most people in this category are daily wage earners and therefore not in a position to pay this large amount on a monthly basis. For them, their present is more important than their future.

The tax benefit of a rebate on income tax for a taxable income of upto Rs 5 lakh will not benefit all the taxpayers because it is a rebate and not an exemption.

The Finance Minister has claimed that the fiscal deficit for the current year would go up by only 10 basis points from 3.3% to 3.4%. Next year's fiscal deficit is also projected to be 3.4%. This is seriously questionable. Revenue receipts have been jacked up; corporation tax is expected to go up from Rs 6.21 lakh crore to Rs 7.60 lakh crore next year. Similarly, income tax is expected to rise from Rs 5.29 lakh crore to Rs 6.20 lakh crore despite the concession announced in the budget. The collection from GST was expected to be Rs 7.44 lakh crore in this year's budget. In the revised estimates there is a shortfall of 1 lakh crore, yet the budget estimate for the next year is Rs 7.61 lakh crore. These figures are highly inflated.

On expenditure, either there is a clear compression or there is underfunding. The expenditure on many flagships schemes of the government, like MNREGA, the green, white and blue revolutions, the Pradhan Mantri Krishi Sinchai Yojna, the Swachh Bharat Mission, the Pradhan Mantri Awas Yojna, the National Health Mission, skill development, LPG connection for poor households, the National Ganga Plan and many others have either been reduced or increased only marginally. Even the income support scheme for the farmers seems to come at the cost of other schemes in the agricultural sector. Unemployment has been a huge issue in the economy. The finance minister has tried to mislead the people by again referring to the EPFO figures while suppressing the NSSO figures (The national sample survey organisation is responsible for collecting data for the govt). Clearly, the government is in denial as far as this problem is concerned.

This regime is determined to buy the votes of people by giving them money in cash through this budget. That, plus the expenditure, both official and personal, during the elections would no doubt put money in peoples' pocket. This may create the demand for consumption goods. However, in the absence of adequate supply side measures, this may lead to inflation as has happened earlier. We will have to watch out.

The government by presenting its sixth regular budget has exceeded the mandate people gave it in 2014; it has made a mockery of the constitution and its conventions; it has indulged in a totally unethical practice and proved to the whole world that what matters to it is votes and votes alone, and that it must continue in office at any cost.