The images of the so-called burkini incident which occurred on a beach in the French town of Nice have not got the attention they deserve in India. The images were available on several sites, including ndtv.com. The series of photographs show four policemen surrounding a woman who, seemingly in response to an order from them, removes her tunic. She is dressed in leggings and a tunic and wearing a head scarf.

What could be objectionable about that? Millions of women prefer as a matter of choice not to bare their bodies on public beaches.

In India, at any given time during the tourist season in a beach resort, you will find women in all kinds of attire from salwar kameezes to sarees to tiny bikinis or regular swimsuits enjoying a swim in the ocean. Burkinis, unlike a salwar kameez or saree, do not billow out in the water, are modest and convenient and are becoming quite popular in India.

It is a matter of choice. Suppose India were to issue a ban on all other swimwear except one that covers your entire body? Suppose all foreign tourists were banned from wearing bikinis or the kind of swimsuits they do? Suppose assertion of dress choice was criminalized? You would think India had been converted into a fundamentalist theocratic state.

But this is what is happening in France, a country that claims to be democratic and secular. Around 15 beach towns across the country have issued a ban on the wearing of burkinis on beaches. The four men in uniform on that beach in Nice were implementing that ban. They were asking the woman to remove her tunic. The message was: either bare your body or stay at home. According to French authorities, the ban is to prevent any dress which "is representational of any religion" so as to promote a "secular ethos." In addition, the charge against her is also that her dress is not "morally good." According to their view, the burkini is the preferred choice of Muslim women, linked to Islamic codes, and therefore must be banned. And in this view, if it is anything to do with Islam, then that is not morally good.

Will the French authorities ban all nuns who wear habits from sitting in the sun on French beaches or enjoying a walk on the ocean's edge? Will that dress also be considered "not morally good?"

Across the world, women's groups have debated and have divided views, particularly in Western countries, on whether wearing the veil can be considered a choice of the woman herself when it is so clearly promoted by religious codes. In India, the veil is not limited to Muslim women. In many communities, it is "traditional" that women cover their heads, sometimes their faces, more so when they are in the presence of seniors in their marital home. The debate in India has been more sensitive to these practices. The veil or the ghunghat has not been seen as a barrier to activism. The capacity of a woman to make a choice and challenge opposition in spheres which, in her view, are more important to her welfare than whether or not she wears a veil, doesn't automatically get diminished if she continues to wear a veil. The individual decision to discard the veil when it is imposed on her is often linked to a sense of power that a woman gains in a broader struggle for women's rights. But it can never and should never be imposed by law or the state in any country that considers itself secular. 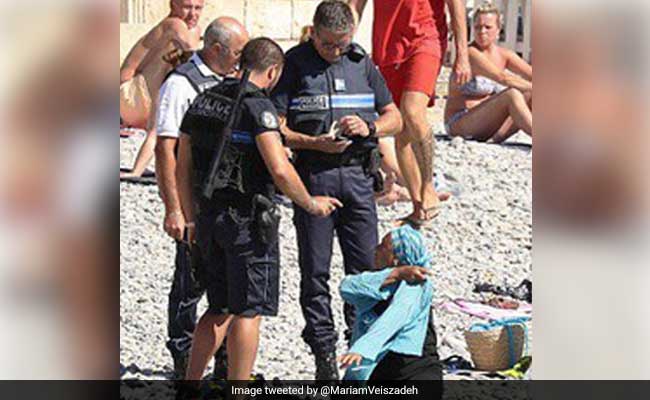 In India, women have had to resist all such attempts from the imposition of dress codes in colleges to blaming the victim of sexual assault for the clothes she was wearing to the shaming of women who dress as they wish and so on. The attempts come from all quarters including from various right-wing outfits of different religious hues.

The French authorities are quite in tune with all these forces in India and globally, because their fundamental agreement is that the right to a personal choice in what to wear is expendable. The French Police acted like the Saudi police, peas in the same pod. Not that this is something new.

When France conquered Algeria, they justified their invasion in "modern" terms - that they had come to liberate the Algerians from their past. The French said that they would free women by unveiling them. But Algerian women mostly did not wear the veil. It was in response to this French attack that the veil became a measure of national resistance for some women. This is the sad outcome of colonial violence. It does not liberate women. It turns the clock back for women's rights to forge their own idea of culture, their own histories.

Earlier French schools had banned the use of a head scarf. That evoked protests but was not considered as controversial since it was linked to the mandatory wearing of a school uniform. The burkini ban has no such alibi.

It violates a basic democratic right of choice. Further, even assuming that it is the choice of mainly Muslim women, the ban does violence to a fundamental principle of secularism, the separation of religion from the state. On the contrary, the ban uses the power of the state to promote discrimination and a grotesque form of Islamophobia.

The vicious, inhuman and barbaric ideology and practice of ISIS in the name of Islam have outraged and repulsed the world. France has been a specific target of mindless terrorist forces. Hundreds have been killed and injured. The world mourned with France, it expressed its solidarity in so many ways. But nothing can justify the use of methods which degrade and demean ordinary Muslims and specifically Muslim women in the way that was done in Nice. In fact it will lead to further anger and alienation against Western impositions of the retrograde theory of the fight "between two civilizations" floated by George Bush when he started the train of events which has ultimately spawned the ISIS.

If French women's groups had a sense of their own history, they would be buying burkinis and wearing them on every beach in France to defy the irrational ban. Here in India, the Embassy of France should be made aware that women in India have a sense of strong solidarity with that burkini-clad woman in Nice.

Promoted
Listen to the latest songs, only on JioSaavn.com
Brinda Karat is a Politburo member of the CPI(M) and a former Member of the Rajya Sabha.