Ever Bigger, Ever More - BJP's Strategy For Bengal

Whether it's an Amit Shah "master stroke", as the adoring political groupies including journalists term his moves, remains to be seen but what is patently clear now is that the contest for Bengal will be between the Trinamool A-team, led by Chief Minister Mamata Banerjee, and the Trinamool B-team, led by Shah.

The "wholesale" defection from the Trinamool Congress, including a minster and MLAs, reassertion that the BJP's claims of being an ideology-driven party are faulty. The only ideology the turncoats share with the BJP is the hunger to take power from Mamata Banerjee and form the government.

The Bengal unit of the BJP, led by Dilip Ghosh, is restive. His bête noire, Mukul Roy, was inducted into the BJP in November 2017 and started calling the shots. So Ghosh was left with a largely ceremonial position.

Shah's declaration that only "Didi will remain in the TMC" makes the BJP uncomfortable as his strategy seems to rest heavily on the defectors taking on Mamata Banerjee. They know her weaknesses and many have high voter approval and are well-known in their constituencies. About 10 days ago, a flock of defectors were flown to Delhi on a chartered plane to meet with Shah in Delhi where he welcomed them into the BJP.

"The number of defections in Bengal, all shepherded by Shah, is the talk of the party and the Sangh. If we still don't form the government, questions will be raised," said a senior leader. Since the general election of 2019, the BJP has netted 18 MLAs, one sitting minister and an MP from the Trinamool. The influx, however, has not provided Shah with a Chief Ministerial candidate against Mamata Banerjee. His preferred choice, cricket board chief Sourav Ganguly, has been hospitalised in the recent past and is recovering from an angioplasty. Sources say that the BJP may have no choice but to seek votes in the name Prime Minister Narendra Modi, a strategy that has been widely successful in some other states. 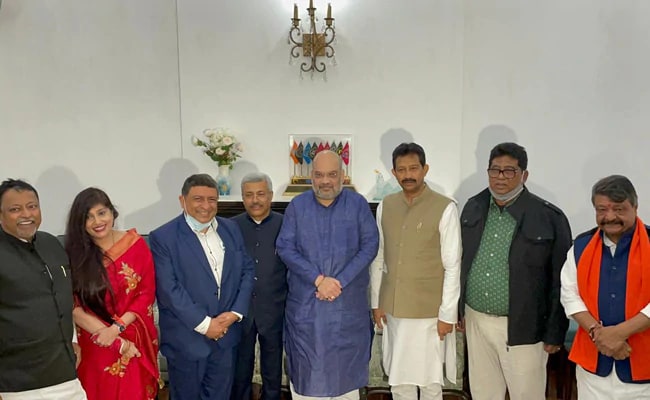 About 10 days ago, a flock of defectors were flown to Delhi on a chartered plane to meet with Shah in Delhi where he welcomed them into the BJP.

All the posters will have a giant Modi, a smaller photo of party president JP Nadda and the candidate in that constituency. Modi will visit Haldia today to inaugurate a natural gas pipeline built by GAIL. The last time he was in Kolkata, about two weeks ago, for the 125th birth anniversary celebrations for Bengal hero and national icon Netaji Subash Chandra Bose, the result was sparky. An irate Banerjee took umbrage at the chants of  "Jai Shree Ram" by a section of the audience and cut short her comments, limiting them to a cutting criticism of the slogans. The PM, in his speech, did not address her injured feelings.

The BJP has moved Bengal into an all-or-nothing competition with the express intent of pushing Mamata Banerjee into self-preservation mode. Yesterday, Nadda launched the party's Rath Yatra program which will see buses converted into open-top "raths" covering each constituency with a senior leader on board . Shah will be in Bengal next week for a visit to Cooch Behar. Several events are planned to see the PM making regular visits to Bengal, nearly weekly, according to some sources, till the elections are held. Shah's trusted social media team has already set up camp in Kolkata. And, the BJP will easily outspend the Trinamool in the most public way. A senior BJP leader who is part of the campaign says "Winning Bengal is Shah's dream and will secure his place in the Sangh iconography. There is nothing we will not do to win this one." Shah has already dusted off the Citizenship Amendment Bill as a poll issue for Bengal and, later, the Assam elections.

Few close elections now play out without a role for Asaduddin Owaisi and his All India Majlis-e-Ittehadul Muslimeen (AIMIM). Owaisi has made several well-publicised trips to Bengal but his planned alliance with Abbas Siddiqui, the powerful Sunni cleric and leader of the newly-formed Indian Secular Front, appears to be coming unstuck. Siddiqui prefers to ally with the Congress-Left front and both those parties have told him that they will have no truck with Owaisi, who they claim is not a "secular" politician. Siddiqui and Owaisi had weighed how a partnership would give them huge access to a large chunk of Bengal's Muslims, who form a little less than 30 percent of the population.

Owaisi has acted as the BJP's secret sauce in several elections, helpfully dividing the non-BJP vote. Owaisi has always denied this but Sakshi Maharaj of the BJP went on record to say "Owaisi helped us in the Bihar elections and will now help us in the Bengal elections."

The biggest takeaway from this is the fact that any significant division of the Muslim vote, which is the deciding factor in nearly 90 of 294 assembly segments in West Bengal, could jeopardise Mamata Banerjee. Both she and the BJP are acutely aware of this.